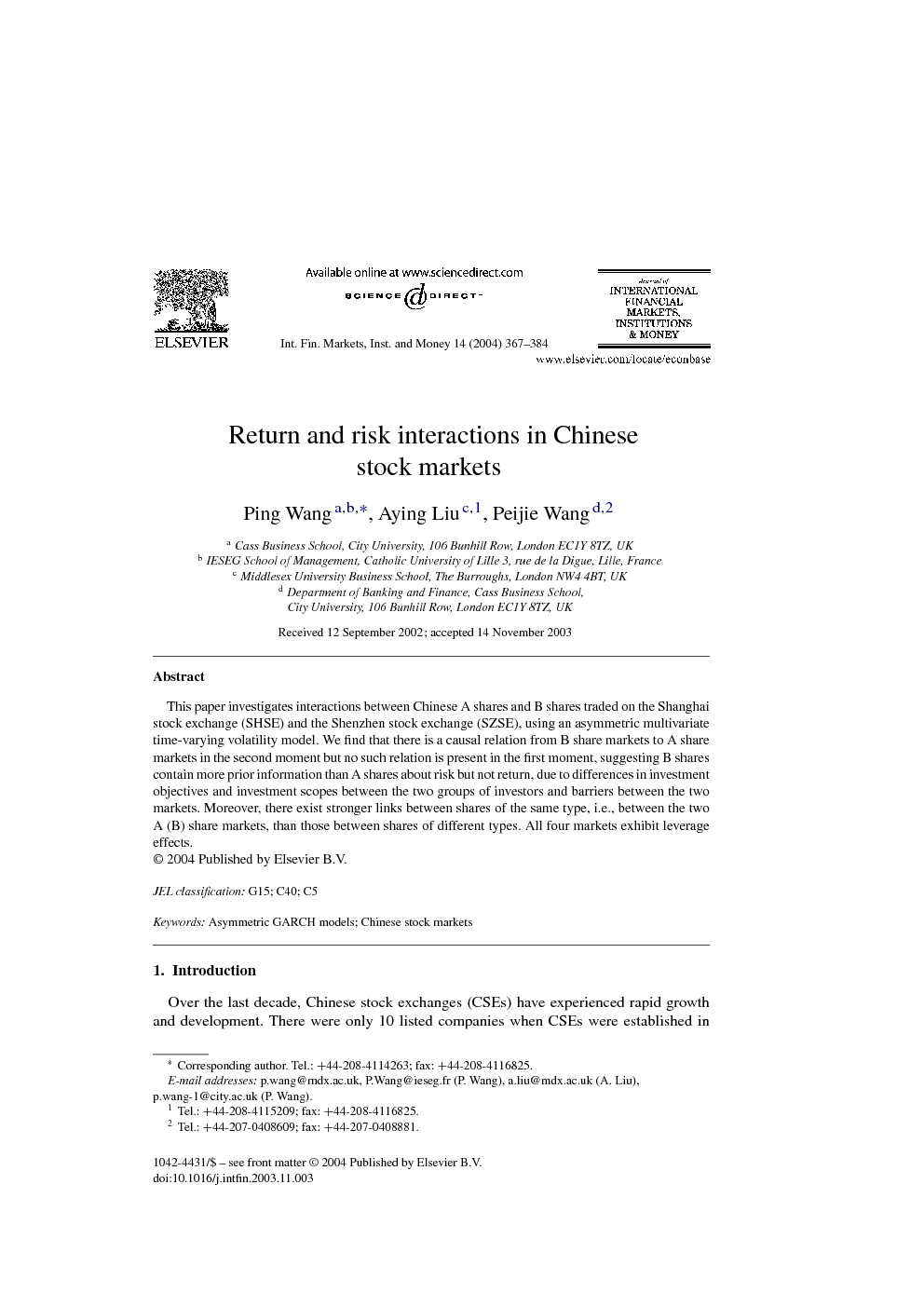 This paper investigates interactions between Chinese A shares and B shares traded on the Shanghai stock exchange (SHSE) and the Shenzhen stock exchange (SZSE), using an asymmetric multivariate time-varying volatility model. We find that there is a causal relation from B share markets to A share markets in the second moment but no such relation is present in the first moment, suggesting B shares contain more prior information than A shares about risk but not return, due to differences in investment objectives and investment scopes between the two groups of investors and barriers between the two markets. Moreover, there exist stronger links between shares of the same type, i.e., between the two A (B) share markets, than those between shares of different types. All four markets exhibit leverage effects.

n this paper, we have investigated interactions in the mean and variance–covariance of returns on four Chinese stock market indices using an asymmetric BEKK model. The topic is of interest in that it opens up an opportunity to investigate different price patterns and investors’ behaviour in a market that is rather different from Western mature markets. As long as B share markets are concerned, they behave rather similarly to developed stock markets that there is strong linkage between the Shanghai B share market and the Shenzhen B share market. This linkage exists in both mean and variance–covariance through a two-way transmission mechanism, i.e., the causal relation is bi-directional. For A share markets, the linkage exists only in the second moment with bi-direction transmission. The most interesting part is nevertheless the relationship between A share markets and B share markets where major contributions have been made in this study. Our findings suggest that while B share markets lead A share markets in the sense of Granger causality, the lead is found in the variance–covariance structure only. Inferred from this evidence is that B shares contain more prior information than A shares about risk but not return, arising mainly from differences in investment objectives and investment scopes between the two groups of investors, but exchange control and other factors may play a role as well. Therefore, while the availability of B shares to domestic investors since March 2001 may alter overall B share investors’ behaviour and consequently reduce the degree of asymmetry, asymmetry will exist as long as there are barriers between A share and B share markets. Finally, we confirm that there exists sign effect or leverage effect in Chinese stock markets and extend the findings to a multivariate setting. That is, volatility increases more following a negative shock than a positive shock in the market itself, and to a certain degree, in the cross-section. The size and sign of return innovations are important features in determining the degree of spillovers in volatility.