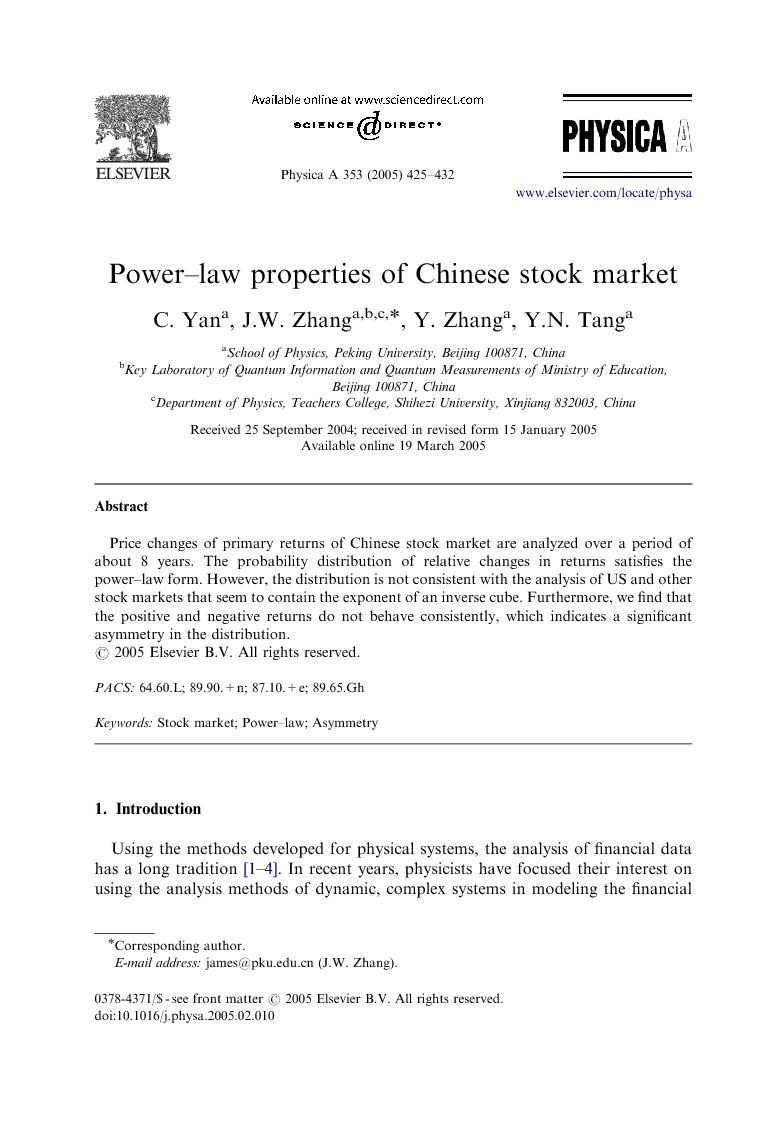 Price changes of primary returns of Chinese stock market are analyzed over a period of about 8 years. The probability distribution of relative changes in returns satisfies the power–law form. However, the distribution is not consistent with the analysis of US and other stock markets that seem to contain the exponent of an inverse cube. Furthermore, we find that the positive and negative returns do not behave consistently, which indicates a significant asymmetry in the distribution.

Using the methods developed for physical systems, the analysis of financial data has a long tradition [1], [2], [3] and [4]. In recent years, physicists have focused their interest on using the analysis methods of dynamic, complex systems in modeling the financial and economic processes [5], [6], [7], [8], [9] and [10]. Recent studies have revealed some interesting findings of the distribution of stock price fluctuations. Results show that it follows a power–law decay with exponents consistent with an inverse cube at the tails (the exponent α≃3α≃3), which lies outside the Lévy stable range (0<α<20<α<2) [11], [12], [13], [14], [15] and [16]. This rule is regarded as a universal one since stocks in the United States [12], [14] and [17], Germany [11] and Australia [18] all obey it. In addition, some market indices also have this characteristic, such as the index of S&P 500, Dow Jones, NIKKEI, Hang Seng, Milan, and DAX [11], [13] and [15]. Several theoretical models have been proposed [19], [20] and [21] to explain the mechanism of the empirical power–law distribution. For instance, Solomon and Richmond [19] build a multiagent system by the use of a generalized Lotka–Volterra model; Gabaix et al. [20] present another theory based on the economic optimization by heterogeneous agents. However, further study of the Indian stock market [22] demonstrates another scenario. In the Indian stock market the distribution of daily returns of the stock price P(g)P(g) decays as an exponential function P(g)∼exp(-βg)P(g)∼exp(-βg), where g is the normalized return and ββ is the decay parameter. In addition, Huang [23] found that by skipping the data in the first 20 min of each morning session, the 1-min data of the Hang Seng index show an exponential-type decay as P(x)∼exp(-α|x|)/|x|P(x)∼exp(-α|x|)/|x|, where x(t)=index(t)-index(t-Δt)x(t)=index(t)-index(t-Δt). These distinct findings complicate the research work of the stock market behavior and diversifies the possible theoretical explanations. In order to test the ubiquity of the inverse-cubic law in the stock markets, we investigate the distribution of daily returns in Chinese stock market. The database of closing prices from the Shanghai Stock Exchange and Shenzhen Stock Exchange is accumulated for calculation [25]. It is observed that the distribution behavior of daily returns follow the power–law rule but the positive and the negative tails show both inconsistence of the exponent of an inverse cube and an asymmetric characteristic.

It is well known that the Chinese stock market has only a history of a few more than 10 years: both Shanghai Stock Exchange and Shenzhen Stock Exchange were founded in 1990 and opened in 1991. This juvenility may be the reason why it behaves differently from those of highly developed countries. Here, we discover that the distribution of daily returns follows the power–law decay with tail exponents of around 2.5 for the positive tail and 4.3 for the negative tail, and exhibits an obvious asymmetric on its tails. These distinct features may be interpreted by the following reasons. First, the quantity of the data may affect the result. There is no theory that discusses the detailed relationship between the number of data and the final distribution behavior, but the quantitative difference of database between our calculation and other studies does exist. The study of the price distribution of the American stock market reaches the inverse-cubic law by the use of a data set around 107107[12], while in our studies, the quantity only reaches 2×1052×105. However, we check our results by the calculation of the individual stock exchange. In such a condition the number of data are around 2×1042×104, but the results are almost the same, which indicates that under the quantity of 2×1052×105, the change of the data number will not affect the distribution characteristic. Moreover, our data scale is the same as the study of the Indian stock market [22]. Second, such difference may be caused by the selected stocks themselves. Although we have selected all the stocks that came into stock markets in the early years, the existing time is still very short compared with most stocks in American and other developed economics. Whether or not the behavior of an individual stock will change as a function of its duration in the market still needs more studies. Finally, over speculation and fulsome impact of government policies may be the reason. As China is still a developing country, most economic institutions are still under construction and the stock market contains some immature facts. Meanwhile, small scale, instability as well as absence of shorting all contribute to the calculation results, especially the lack of short sale of Chinese stock markets results in the obvious asymmetry as shown in Figs. 1 and 4. Market behavior seems to be affected by these forces to perform such discontinuity and asymmetry. Two ways may be practised here: conform such infection as a removable error and try to take it off; or this is the real feature of Chinese stock market and may be a new law should be found. A further investigation based on a larger and more complete database is still under way.