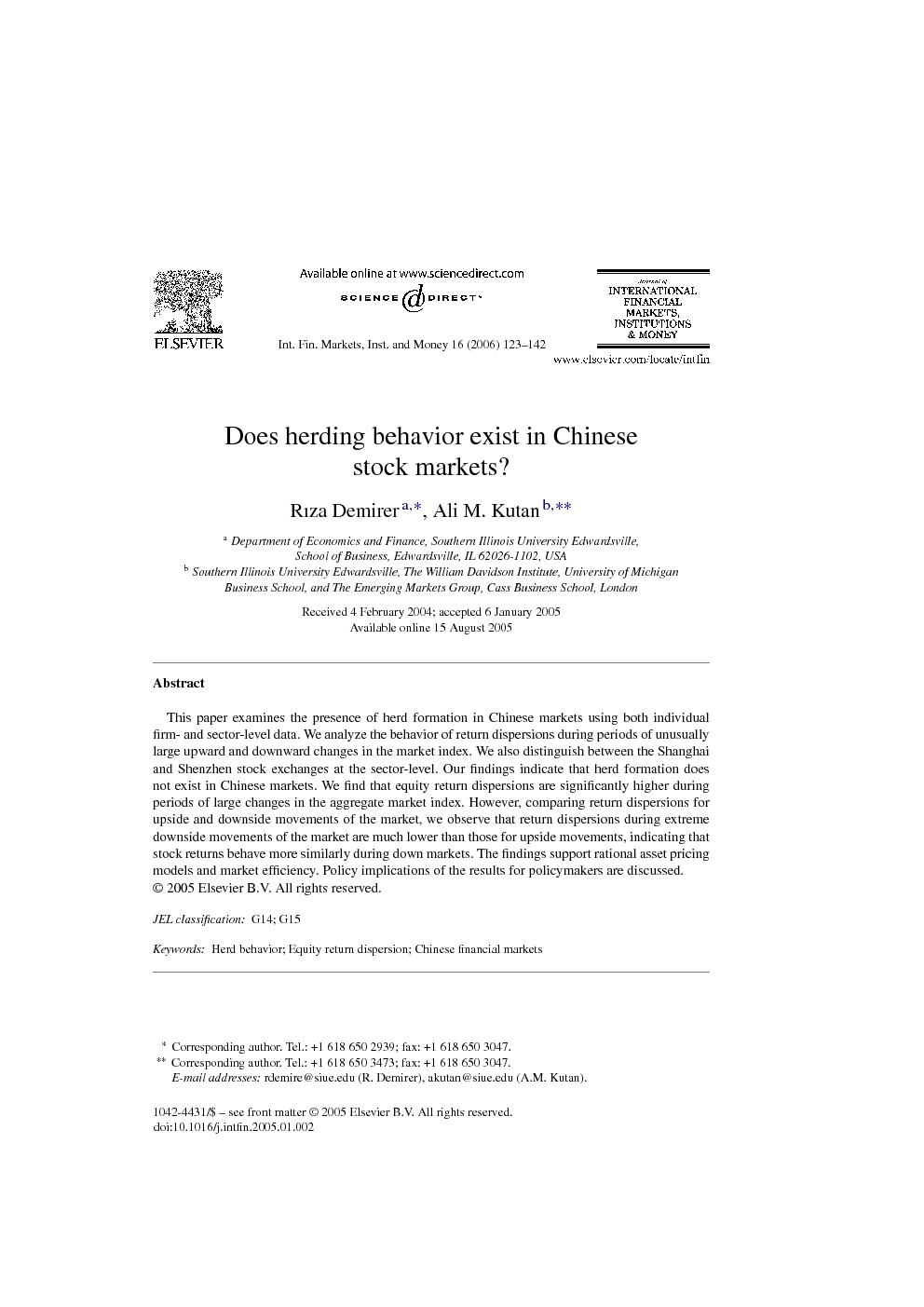 This paper examines the presence of herd formation in Chinese markets using both individual firm- and sector-level data. We analyze the behavior of return dispersions during periods of unusually large upward and downward changes in the market index. We also distinguish between the Shanghai and Shenzhen stock exchanges at the sector-level. Our findings indicate that herd formation does not exist in Chinese markets. We find that equity return dispersions are significantly higher during periods of large changes in the aggregate market index. However, comparing return dispersions for upside and downside movements of the market, we observe that return dispersions during extreme downside movements of the market are much lower than those for upside movements, indicating that stock returns behave more similarly during down markets. The findings support rational asset pricing models and market efficiency. Policy implications of the results for policymakers are discussed.

Understanding the decision making process of market participants has always been a major challenge to academics as well as practitioners. A number of papers have documented that the standard (efficient market) financial theory has major shortcomings in modeling real life stock returns (e.g. Summers, 1986 and Shiller, 1981). This theory assumes that investors form rational expectations of future prices and also instantaneously discount all market information into expected prices in the same way. However, these assumptions form the basis for criticism of this theory in representing behavior of stock returns in practice. According to the theory of efficient markets, investors form homogeneous expectations based on all available information, know that others use this publicly available information exactly the same way they do, and are all perfect rational utility maximizers. Formation of investor herds has been proposed as an alternative explanation of how investors make investment choices. Such behavior presents a concern to policymakers as such behavior might aggravate volatility of returns, and hence destabilize financial markets, especially in crisis conditions. Bikhchandani and Sharma (2000) define herd behavior as an obvious intent by investors to copy the behavior of other investors. Several views have been suggested on why profit or utility maximizing investors would tend to suppress their private information and mimic the actions of other investors. One line of research approaches the problem by focusing on the psychology of the investor who may have a preference for conformity with the market consensus (Devenow and Welch, 1996). A second view suggests that others may know something about the returns on the particular investment and their actions reveal this information (Chari and Kehoe, 1999, Calvo and Mendoza, 1998 and Avery and Zemsky, 1998). Finally, a third approach focuses on the principal–agent relationship where money managers might be drawn to imitating others as a result of the incentives provided by the compensation scheme, terms of employment or perhaps in order to maintain their reputation (Scharfstein and Stein, 1990, Rajan, 1994 and Maug and Naik, 1996). Bikhchandani and Sharma (2000) and Hirshleifer and Teoh (2001) provide a comprehensive survey of the literature. In this paper, we examine the presence of herd formation in Chinese stock markets along the lines of Christie and Huang (1995), Chang et al. (2000) and Gleason et al., 2003 and Gleason et al., 2004. The testing methodology is based on the idea that investors are more likely to suppress their own beliefs in favor of the market consensus during large price changes, so herd behavior is most likely to emerge during such periods. Therefore, equity return dispersions around aggregate market return are used to test formation of herds during periods of market stress. Following this rationale, one would expect significantly lower dispersions in individual security returns as investors are drawn to the consensus of the market. Such a prediction contradicts rational asset pricing models that suggest that periods of market stress induce increased levels of dispersion as individual returns differ in their sensitivity to the market return. Notable applications of this methodology include Christie and Huang (1995) on US equities, Chang et al. (2000) on international equities, Gleason et al. (2003) on commodity futures traded on European exchanges and Gleason et al. (2004) on Exchange Traded Funds. In general, these studies provide results in favor of the rational asset pricing theories and conclude that herding is not an important factor in determining security returns during periods of market stress. This paper extends the analysis to the Chinese stock market, including both Shanghai and Shenzhen Stock Exchanges and provides new insights into developing equity markets. Consistent with prior studies, we find no evidence of herd formation. Our analysis of firm-level data as well as sector-level data from the Shanghai and Shenzhen Stock Exchanges indicates that equity return dispersions increase during periods of large changes in the aggregate market index. This finding supports rational asset pricing models. However, comparing return dispersions for upside and downside movements of the market, we see that return dispersions during extreme downside movements of the market are much lower than those for upside movements indicating that stock returns behave more similar during down markets. This suggests that portfolio diversification strategies may not be as useful in bear markets, when benefits from diversification are most needed. An outline of the remainder of the paper is as follows. Section 2 motivates the paper. Section 3 briefly summarizes the previous studies on Chinese stock markets. In Section 4, we provide the methodological details and data description. In Section 5, we present empirical results that we obtain using firm- and sector-level data. Finally, in Section 6 we provide concluding remarks and discuss further research.

In this paper, we test formation of herds along the lines of Christie and Huang (1995), Chang et al. (2000) and Gleason et al., 2003 and Gleason et al., 2004. The testing methodology is based on the assumption that investors would be more likely to ignore their private information and go with the market consensus during periods of market stress. Consistent with prior studies, perhaps surprisingly, we find no evidence of herd formation, using both firm- and sector-level data from the Shanghai and Shenzhen Stock Exchanges. The findings have important policy implications. Evidence suggests that market participants in Chinese stock markets make investment choices rationally. This is useful for modeling stock behavior in Chinese markets and the findings support rational asset pricing models. In addition, the lack of evidence of herd behavior should provide confidence for Chinese policymakers that they do not have to be concerned about potential destabilizing effects. It is also interesting to note that the results for both the Shanghai and Shenzhen exchanges are consistent, indicating that traders in the Shanghai market are as informed as those in the Shenzhen market. This indicates a smooth transition of information between markets, as reported in earlier studies. An important implication of our findings is that stock market segmentation is not necessarily a barrier for efficient flow of information. An important extension of this paper would be to study the impact of the dual structure of Chinese firms on potential herd formation. As reported earlier, a number of studies have reported that A- and B-shares have significantly different statistical properties and sensitivities to global forces. Furthermore, due to the fact that market B is characterized by greater institutional investor participation, one may expect that these investors have access to a broader range of information on the market than domestic investors. Given the existing debate on this issue (e.g. Chakravarty et al., 1998 and Yang, 2003), it would be interesting to analyze returns on A- and B-type shares separately and examine whether herd formation could be identified when we differentiate between domestic and foreign investors in Chinese markets. In addition, the impact of central bank actions and government regulations on herd behavior requires further scrutiny. Finally, the results may be sensitive to different approaches for testing for herd formation.