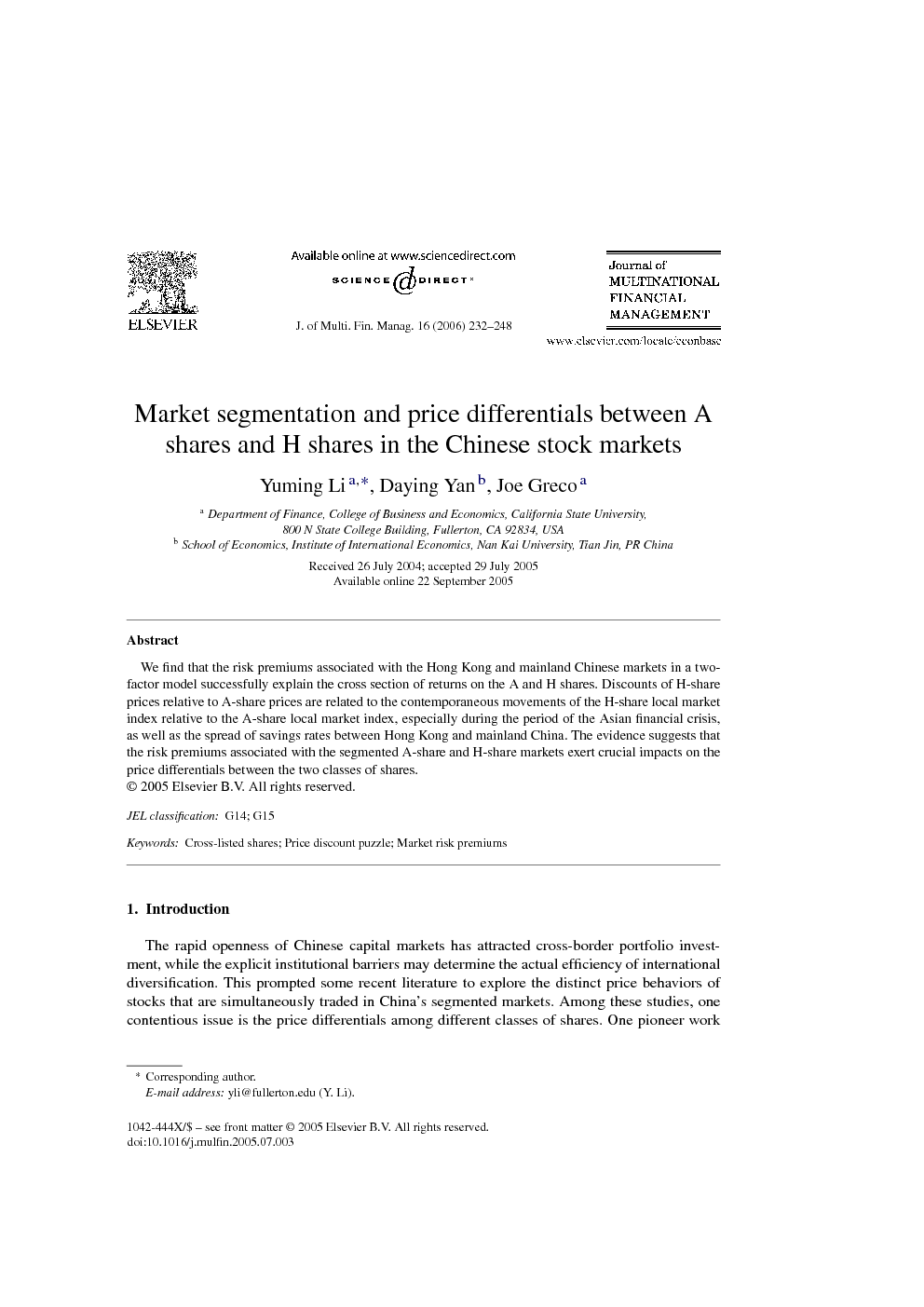 We find that the risk premiums associated with the Hong Kong and mainland Chinese markets in a two-factor model successfully explain the cross section of returns on the A and H shares. Discounts of H-share prices relative to A-share prices are related to the contemporaneous movements of the H-share local market index relative to the A-share local market index, especially during the period of the Asian financial crisis, as well as the spread of savings rates between Hong Kong and mainland China. The evidence suggests that the risk premiums associated with the segmented A-share and H-share markets exert crucial impacts on the price differentials between the two classes of shares.

The rapid openness of Chinese capital markets has attracted cross-border portfolio investment, while the explicit institutional barriers may determine the actual efficiency of international diversification. This prompted some recent literature to explore the distinct price behaviors of stocks that are simultaneously traded in China's segmented markets. Among these studies, one contentious issue is the price differentials among different classes of shares. One pioneer work by Bailey (1994) documents that class B shares traded by foreign investors are sold at discounts relative to class A shares traded by domestic investors, a phenomenon that is inconsistent with the price premiums commonly found in other countries (e.g., Bailey and Jagtiani, 1994, Domowitz et al., 1997, Stulz and Wasserfallen, 1995 and Bailey et al., 1999). Several explanations have been provided for this exception. The first is based on the discount-pricing model. Bailey (1994) argues that the lower required returns of Chinese citizens due to the limited investment opportunities might have an effect. Bailey (1994) further suggests that since the political and macroeconomic risks peculiar to the B-share markets are undiversifiable to the primary foreign investors, they may add potential risk premiums on B shares and discount the prices of B shares heavily as compensation for this systemic risk. Bergström and Tang (2001) argue that clientele bias, foreign exchange risks and risk-free return differentials can deter the diversification benefits of foreign investments particularly in the B-share market. The second hypothesis is invoked by the “investor sentiment” notions introduced by Lee et al. (1991). Bailey (1994) proposes that the unseasoned or unduly optimism of domestic investors may drive the overpricing of A-share. A later work by Ma (1996) demonstrates that the A-share prices are positively related to domestic beta risk, implying the risk-seeking behavior of Chinese investors. The third strand of theories centers on demand and supply of shares in segmented markets. Sun and Tong (2000) argue that the co-existence of H shares and red chips as alternatives to B shares for foreign investors makes the demand for B shares quite price elastic, leading to low equilibrium prices of B shares. Indeed, the exceptional discount on foreign-only shares in China complements the argument of Stulz and Wasserfallen (1995), who attribute the price premium to the inelastic demand of foreigners. This article extends the studies on the Chinese stock markets by investigating the price discounts of H shares relative to A shares. As documented by Sun and Tong (2000), the price premiums or discounts of B shares and H shares tend to move together over time and H shares traded in the Hong Kong market offer substitutes for B shares traded in mainland China. Hence, an understanding of the price discounts of H shares relative to A shares should help resolve the price discount puzzle for both B shares and H shares of Chinese firms. Unlike A shares and B shares which are traded in the same stock exchanges within mainland China, A shares and H shares are segmented in terms of the stock ownership as well as the listing and trading locations. Specifically, while A shares are traded in mainland Chinese stock exchanges by local investors, H shares are owned and traded by investors in Hong Kong. The unique nature of segmentation between A shares and H shares suggests that the price discounts of H shares to A shares may be explained by the influence of the local market performance. More formally, we examine whether and how the differences in market risk premiums, interest rates and exchange rates could induce the substantive price differentials. Although in our time-series model the explanatory factors reflect market-wide information, the tests are mainly performed at the company-specific level over a long sample horizon. In this way our results facilitate closer inspection of stylized price differentials between A shares and H shares without the cost of statistical reliability.1 Our paper indeed reveals that the firm-specific price discounts of H shares relative to A shares are closely correlated with the difference in the movements between the contemporaneous Hang Seng Stock Index and the Shanghai Stock Index, and the spread between the Hong Kong and mainland Chinese interest rates, both of which are crucial constituents of market risk premiums. This paper is also motivated by recent literature on the effects of the Asian financial crisis on financial markets. Froot et al. (2001) document that while international investors did not abandon emerging markets during the crisis, daily inflows into all emerging markets over the July 1997–July 1998 period averaged only 40% for all emerging markets and 30% for Asia compared with their pre-crisis (1994–1997) levels. Lin and Swanson (2004), however, find little evidence of significant crisis effects under information dissemination. We report that the Asian financial crisis exerts an economically significant impact on the volatility of the Hong Kong equity market and H-share prices, while the crisis fails to affect the mainland China's equity market and cross-listed A shares traded in mainland China. The evidence is consistent with the asset pricing theory in segmented markets, which suggests that the risk premiums associated with the segmented A-share and H-share markets exert crucial impacts on the price differentials between the two classes of shares. Our results confirm the empirical findings that stock returns from different classes of shares are sensitive to distinct markets (Hietala, 1989 and Chen et al., 2001). The results are also in accord with empirical findings that asset prices are affected by the location of trade (e.g., Froot and Dabora, 1999 and Chan et al., 2003). The rest of paper proceeds as follows. Section 2 briefly outlines the institutional settings of Chinese equity markets and the construction of the sample. Section 3 examines the relations between stock returns and market-wide factors. Section 4 performs analysis of price differentials between A shares and H shares. The final section concludes the article.

Inspired by the existing studies on price differentials between A shares and B shares in the segmented Chinese capital market, this paper conducts an exploratory study of price discounts on H-share relative to A shares using the conventional asset pricing theory. By studying the price behaviors of 13 firms dual-listed on mainland and Hong Kong stock markets over January 1997–March 2002, we find that A-share excess returns are primarily explained by the market risk premium from the mainland China while H shares excess returns embody risk premiums from both Hong Kong and mainland China's markets, with a larger portion pertaining to the former. We find that the risk premiums associated with the Hong Kong and mainland China's markets in a two-factor model successfully explain the cross section of returns on the A and H shares. Consistently, we show that discounts on H shares relative to A shares are highly related to the contemporaneous discounts of H-share local market relative to the A-share local market, as well as the spread of the savings rates between Hong Kong and mainland China. The results of this study indicate that the price differentials in the Chinese dual-listed A shares and H shares are mainly attributable to the deviation in the systemic risk premiums of the local markets. We also report that the increased volatility of the H-share discounts during the Asian financial crisis can be attributed in part to the increased volatility of the Hong Kong stock market relative to that of the mainland China. The exchange rate change between the currencies of Hong Kong and mainland China, though experienced increased volatility and increased correlation with the Hong Kong market during the crisis period, does not have any significant effects on the price discounts of H shares below A shares.