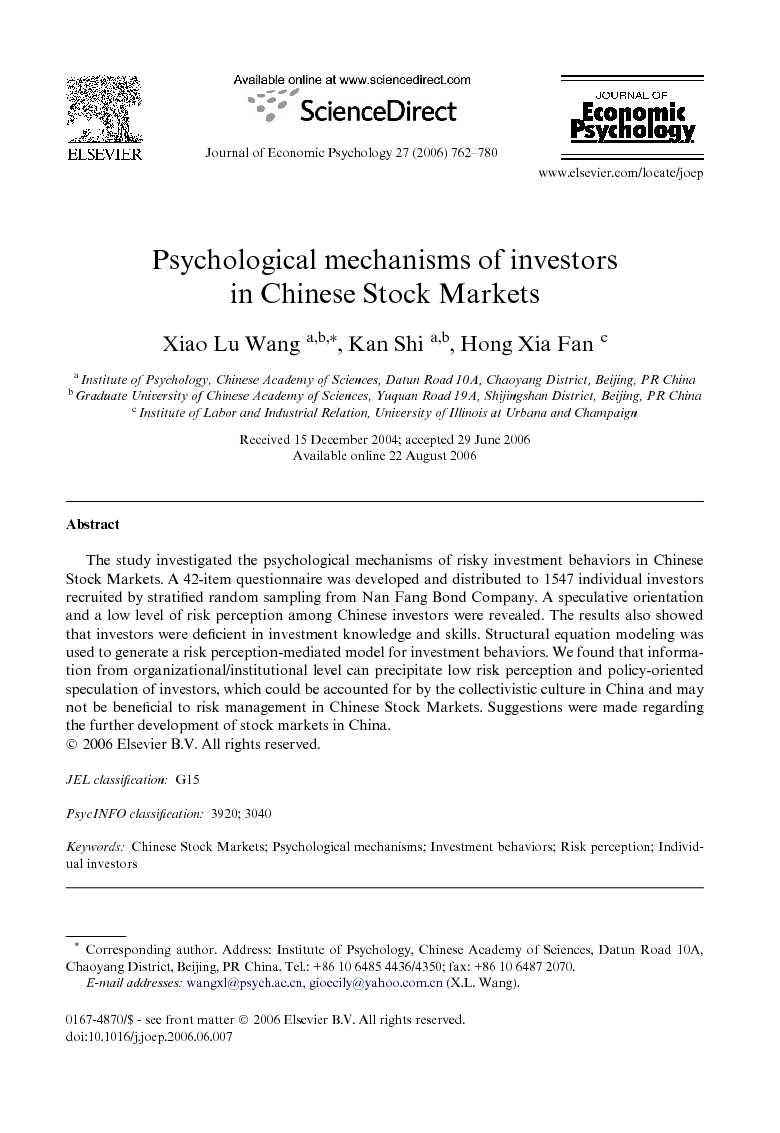 The study investigated the psychological mechanisms of risky investment behaviors in Chinese Stock Markets. A 42-item questionnaire was developed and distributed to 1547 individual investors recruited by stratified random sampling from Nan Fang Bond Company. A speculative orientation and a low level of risk perception among Chinese investors were revealed. The results also showed that investors were deficient in investment knowledge and skills. Structural equation modeling was used to generate a risk perception-mediated model for investment behaviors. We found that information from organizational/institutional level can precipitate low risk perception and policy-oriented speculation of investors, which could be accounted for by the collectivistic culture in China and may not be beneficial to risk management in Chinese Stock Markets. Suggestions were made regarding the further development of stock markets in China.

This study confirmed a risk perception-centered psychological mechanism to understand the irrational investment behaviors such as short-term speculation and frequent stock trading prevailing in Chinese Stock Markets. It also revealed an underestimation of risk in stock markets by Chinese individual investors. They had lower risk perception on subjective risks such as pursuing up-going stock and excessive speculation than objective risks such as variation in policies related to stock market and improper management of listed companies. This contributed to the speculative atmosphere in the Chinese Stock Markets. In addition, we found that institutional factors such as market policy had a great impact on investment decisions of investors because of the collectivistic culture in China. Based on our findings, we have made a few recommendations for the healthier development of the Chinese Stock Markets in the future. First, education and training on investment knowledge and skills should be given to the Chinese individual investors. Second, China’s Securities Regulatory Commission should strengthen the regulation of listed companies on information disclosure and investment yield reallocation so as to increase the investment confidence of investors. Third, in order to rectify the functional bias of stock markets in China, it is necessary to reduce the state’s stake in listed companies and accordingly to increase the liquidity of stocks and the competitive mechanism in the markets. Fourth, more emphasis should be given to the risk management of stock markets and meanwhile to keep the continuity and stability of market regulation policies, which in turn contributes to the establishment of a national psychological precautionary system in stock crisis.