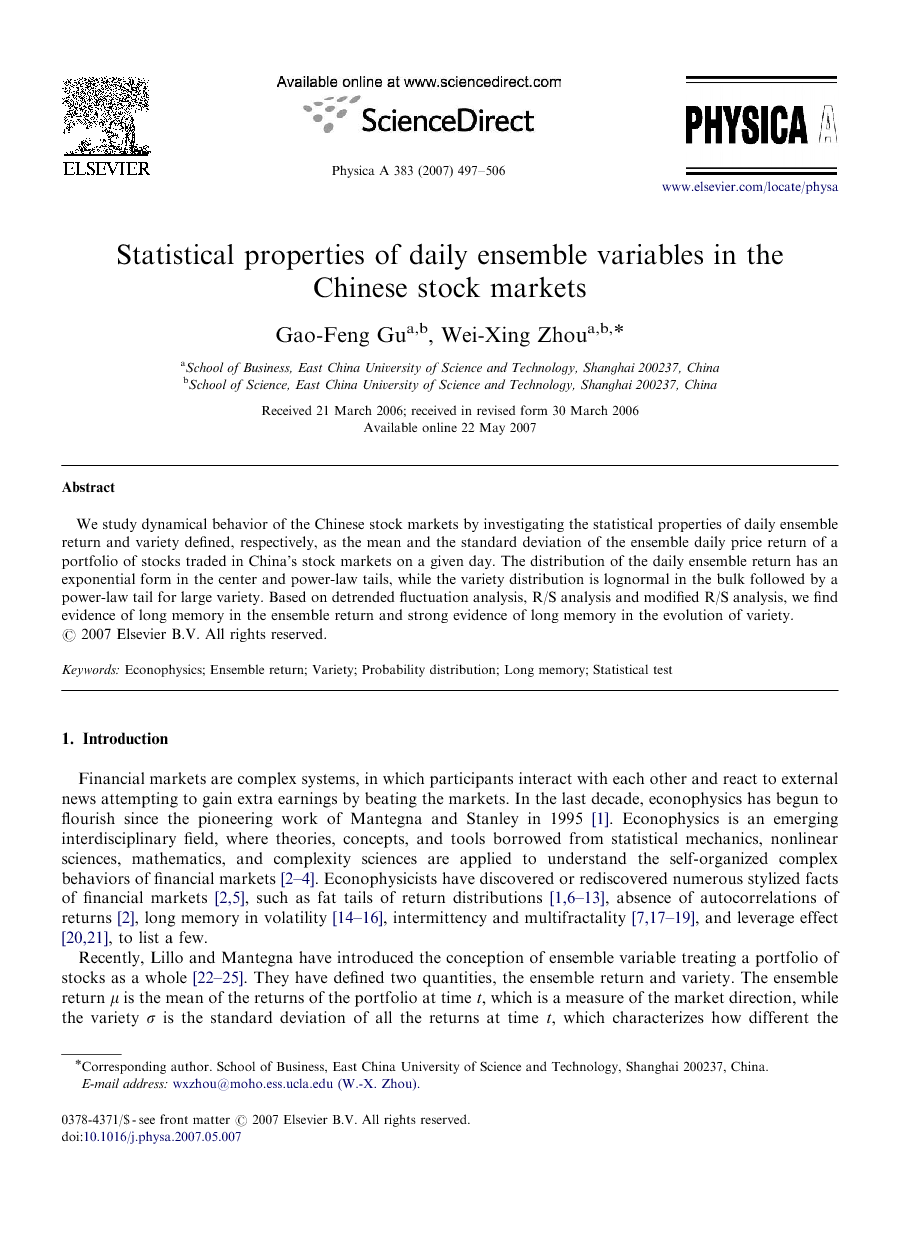 We study dynamical behavior of the Chinese stock markets by investigating the statistical properties of daily ensemble return and variety defined, respectively, as the mean and the standard deviation of the ensemble daily price return of a portfolio of stocks traded in China's stock markets on a given day. The distribution of the daily ensemble return has an exponential form in the center and power-law tails, while the variety distribution is lognormal in the bulk followed by a power-law tail for large variety. Based on detrended fluctuation analysis, R/S analysis and modified R/S analysis, we find evidence of long memory in the ensemble return and strong evidence of long memory in the evolution of variety.

Financial markets are complex systems, in which participants interact with each other and react to external news attempting to gain extra earnings by beating the markets. In the last decade, econophysics has begun to flourish since the pioneering work of Mantegna and Stanley in 1995 [1]. Econophysics is an emerging interdisciplinary field, where theories, concepts, and tools borrowed from statistical mechanics, nonlinear sciences, mathematics, and complexity sciences are applied to understand the self-organized complex behaviors of financial markets [2], [3] and [4]. Econophysicists have discovered or rediscovered numerous stylized facts of financial markets [2] and [5], such as fat tails of return distributions [1], [6], [7], [8], [9], [10], [11], [12] and [13], absence of autocorrelations of returns [2], long memory in volatility [14], [15] and [16], intermittency and multifractality [7], [17], [18] and [19], and leverage effect [20] and [21], to list a few. Recently, Lillo and Mantegna have introduced the conception of ensemble variable treating a portfolio of stocks as a whole [22], [23], [24] and [25]. They have defined two quantities, the ensemble return and variety. The ensemble return μμ is the mean of the returns of the portfolio at time t, which is a measure of the market direction, while the variety σσ is the standard deviation of all the returns at time t, which characterizes how different the behavior of stocks is. In the time periods when the markets are very volatile, the ensemble return has larger fluctuations and the variety is larger as well. It is very interesting to note that there are sharp peaks in the variety time series when the market crashes [24] and [25], which is reminiscent of the behavior of volatility. In addition, the daily ensemble return of stocks in the New York Stock Exchange (NYSE) is found to be uncorrelated, while the daily variety has long memory [23]. Despite of such remarkable similarities shared by the ensemble return and the return and by the variety and the volatility, there is significant difference between these “competing” quantities, especially the shapes of the corresponding distributions. There are a huge number of studies in the literature showing that emerging stock markets behave differently other than the developed markets in many aspects. In most developed markets, the daily return has well established fat tails, while the distributions of daily returns are exponential in several emerging markets, e.g., in China [26], Brazil [27], and India [28]. It is very interesting to investigate the statistical properties of the ensemble variables extracted in emerging stock markets, which is the main motivation of the current work. We shall focus on the Chinese stock markets in this paper. The paper is organized as follows. In Section 2, we explain the data set analyzed and define explicitly the ensemble return and variety. Section 3 presents analysis on the probability distributions of the daily ensemble return and variety. We discuss in Section 4 the temporal correlations of the two quantities, where we adopt R/S analysis and detrended fluctuation analysis (DFA) to estimate the Hurst index and perform statistical tests using Lo's modified R/S statistic. The last section concludes.

The ensemble variables μμ and σσ are important for studying the behavior of financial markets as a whole complex system, instead of individual stocks. In this paper, we have studied the statistical properties of the daily ensemble return and daily variety of 500 stocks traded on the SHSE and SZSE from 1994/02/14 to 2004/09/15. The daily ensemble return μμ is found to have exponential distributions followed by power-law tails. The negative ensemble return decays more slowly than the positive part. The negative and positive tail exponents are α-=3.33±0.06α-=3.33±0.06 and α+=2.86±0.07α+=2.86±0.07. On the other hand, the daily variety σσ exhibits a lognormal distribution for not large values and a power-law form on the tail for large values. The tail exponent is estimated to be β=5.3±0.2β=5.3±0.2. There are numerous controversies on the efficiency of the Chinese stock markets, with slight bias to inefficiency [29]. Using DFA, R/S analysis and modified R/S analysis, we have shown that the daily ensemble return has long-term memory in several time periods, which is nevertheless insignificant in the whole time series. Specifically, the long memory disappears only in the time period from 1999/05/19 to 2002/01/14. This indicates that the Chinese stock markets do not follow random walks in most time periods. The long-term memory in the daily variety is quite strong with a large Hurst index H=0.91∼0.93H=0.91∼0.93.