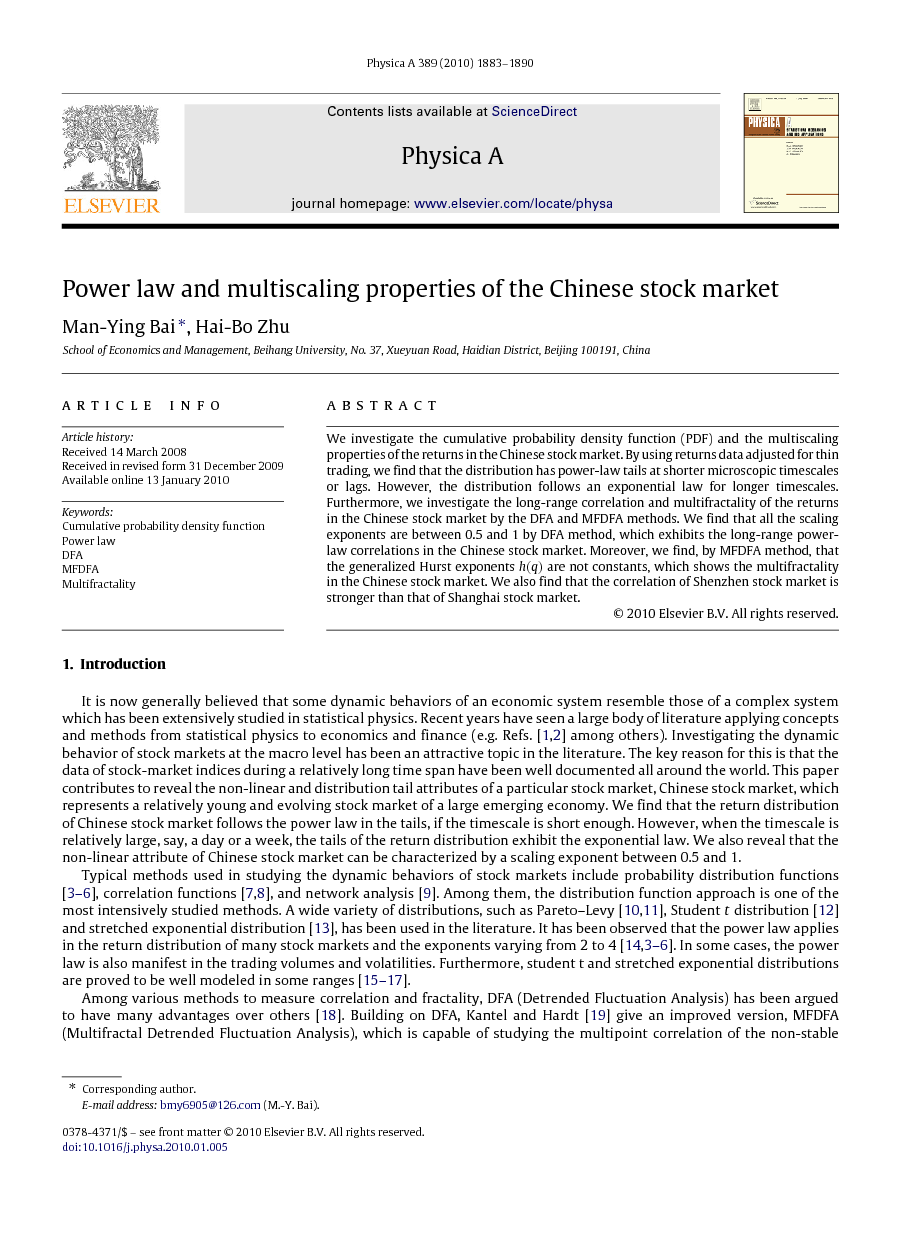 It is now generally believed that some dynamic behaviors of an economic system resemble those of a complex system which has been extensively studied in statistical physics. Recent years have seen a large body of literature applying concepts and methods from statistical physics to economics and finance (e.g. Refs. [1] and [2] among others). Investigating the dynamic behavior of stock markets at the macro level has been an attractive topic in the literature. The key reason for this is that the data of stock-market indices during a relatively long time span have been well documented all around the world. This paper contributes to reveal the non-linear and distribution tail attributes of a particular stock market, Chinese stock market, which represents a relatively young and evolving stock market of a large emerging economy. We find that the return distribution of Chinese stock market follows the power law in the tails, if the timescale is short enough. However, when the timescale is relatively large, say, a day or a week, the tails of the return distribution exhibit the exponential law. We also reveal that the non-linear attribute of Chinese stock market can be characterized by a scaling exponent between 0.5 and 1. Typical methods used in studying the dynamic behaviors of stock markets include probability distribution functions [3], [4], [5] and [6], correlation functions [7] and [8], and network analysis [9]. Among them, the distribution function approach is one of the most intensively studied methods. A wide variety of distributions, such as Pareto–Levy [10] and [11], Student tt distribution [12] and stretched exponential distribution [13], has been used in the literature. It has been observed that the power law applies in the return distribution of many stock markets and the exponents varying from 2 to 4 [14], [3], [4], [5] and [6]. In some cases, the power law is also manifest in the trading volumes and volatilities. Furthermore, student t and stretched exponential distributions are proved to be well modeled in some ranges [15], [16] and [17]. Among various methods to measure correlation and fractality, DFA (Detrended Fluctuation Analysis) has been argued to have many advantages over others [18]. Building on DFA, Kantel and Hardt [19] give an improved version, MFDFA (Multifractal Detrended Fluctuation Analysis), which is capable of studying the multipoint correlation of the non-stable series. This method has now been accepted as one of the standard methods to measure multifractality, and has extensively been used since it came into being. Based on the MFDFA and modified R/S analysis, Gu and Zhou [20] study dynamical behavior of the Chinese stock market by investigating the statistical properties. Jiang and Zhou [21] apply the partition function approach and find that the Chinese stock market also exhibited multifractal behavior as a whole. Du and Ning [22] use the partition function approach, singular spectrum method and the MFDFA method to analyze the multifractality in Shanghai stock market and find the weak multifractal features and the long-range correlation. Moreover, the multifractal theories have further been incorporated into the financial risk management framework and some new risk measurement and prediction models have been derived [23], [24] and [25]. The plan of this paper is as follows. Section 2 presents and analyzes the thin trading. Section 3 uses cumulative PDFs to analyze the return distribution. Section 4 investigates fractality and long-range correlation by DFA method. Section 5 presents multifractal analysis by MFDFA method, while conclusions are presented in Section 6.

By using returns adjusted for thin trading, we consider the cumulative probability distribution function (PDF) of the returns in Shanghai and Shenzhen stock markets. We find that exponents approximately equal to each other when View the MathML sourcet1=5min, 60 min, or 1 day, which shows the attribute of scale invariance. However, the exponents of one week timescale series are much larger, which indicates the scaling behavior. In other words, the distribution changes when the timescale is a week or longer. We also find that a shorter microscopic timescale leads to the power-law tails of the distributions, and a longer timescale (for example one week) leads to an exponential law instead. We use the DFA and MFDFA methods to investigate the long-term correlation and multifractality in Chinese stock market. Using the DFA method, we find that all the scaling exponents are between 0.5 and 1, which exhibits the long-range power-law correlations in the Chinese stock market. Using the MFDFA method, we find that the generalized Hurst exponents h(q)h(q) are not constants, which show the multifractality in the Chinese stock market. We also find that the correlation of Shenzhen stock index series is stronger than that of Shanghai stock index series by both methods.