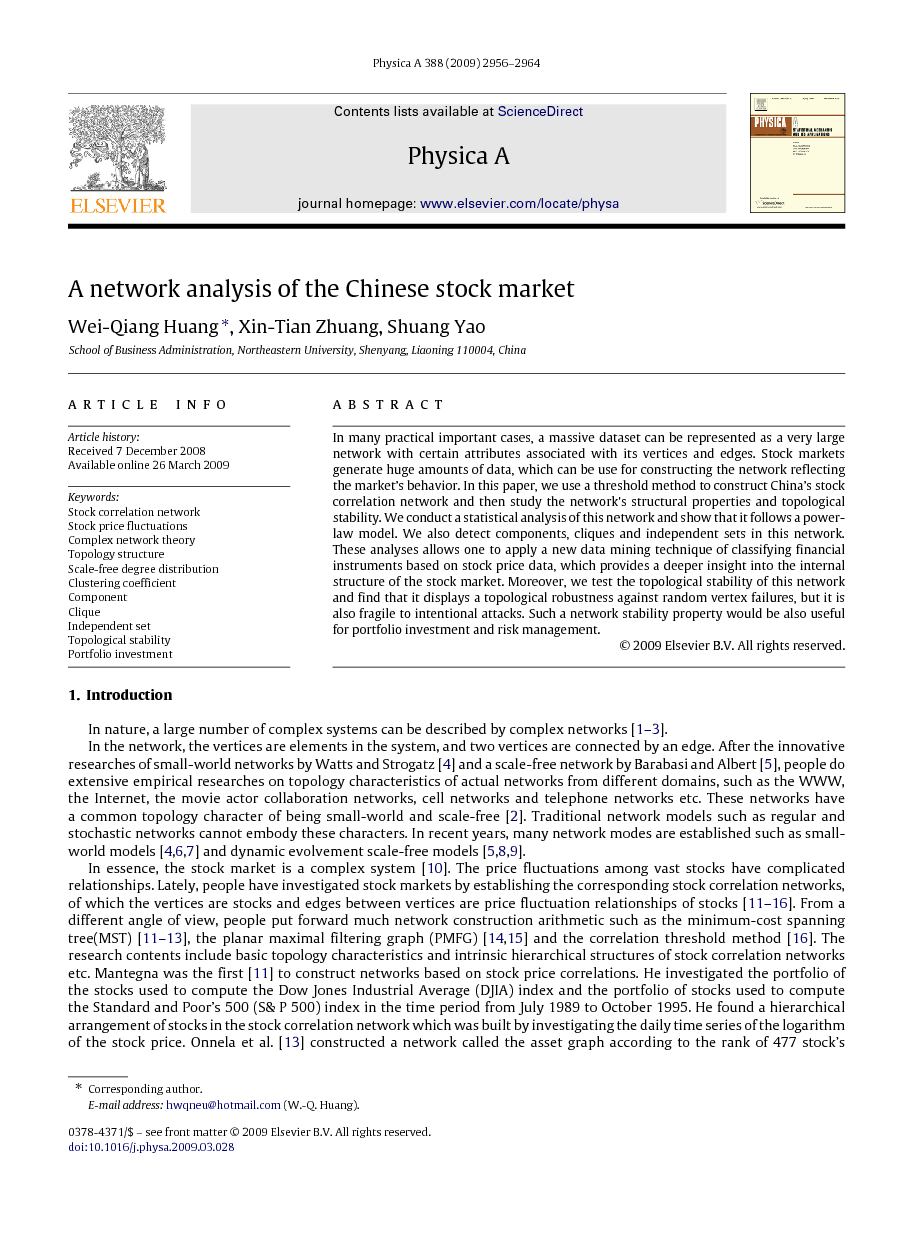 In many practical important cases, a massive dataset can be represented as a very large network with certain attributes associated with its vertices and edges. Stock markets generate huge amounts of data, which can be use for constructing the network reflecting the market’s behavior. In this paper, we use a threshold method to construct China’s stock correlation network and then study the network’s structural properties and topological stability. We conduct a statistical analysis of this network and show that it follows a power-law model. We also detect components, cliques and independent sets in this network. These analyses allows one to apply a new data mining technique of classifying financial instruments based on stock price data, which provides a deeper insight into the internal structure of the stock market. Moreover, we test the topological stability of this network and find that it displays a topological robustness against random vertex failures, but it is also fragile to intentional attacks. Such a network stability property would be also useful for portfolio investment and risk management.

In nature, a large number of complex systems can be described by complex networks [1], [2] and [3]. In the network, the vertices are elements in the system, and two vertices are connected by an edge. After the innovative researches of small-world networks by Watts and Strogatz [4] and a scale-free network by Barabasi and Albert [5], people do extensive empirical researches on topology characteristics of actual networks from different domains, such as the WWW, the Internet, the movie actor collaboration networks, cell networks and telephone networks etc. These networks have a common topology character of being small-world and scale-free [2]. Traditional network models such as regular and stochastic networks cannot embody these characters. In recent years, many network modes are established such as small-world models [4], [6] and [7] and dynamic evolvement scale-free models [5], [8] and [9]. In essence, the stock market is a complex system [10]. The price fluctuations among vast stocks have complicated relationships. Lately, people have investigated stock markets by establishing the corresponding stock correlation networks, of which the vertices are stocks and edges between vertices are price fluctuation relationships of stocks [11], [12], [13], [14], [15] and [16]. From a different angle of view, people put forward much network construction arithmetic such as the minimum-cost spanning tree(MST) [11], [12] and [13], the planar maximal filtering graph (PMFG) [14] and [15] and the correlation threshold method [16]. The research contents include basic topology characteristics and intrinsic hierarchical structures of stock correlation networks etc. Mantegna was the first [11] to construct networks based on stock price correlations. He investigated the portfolio of the stocks used to compute the Dow Jones Industrial Average (DJIA) index and the portfolio of stocks used to compute the Standard and Poor’s 500 (S& P 500) index in the time period from July 1989 to October 1995. He found a hierarchical arrangement of stocks in the stock correlation network which was built by investigating the daily time series of the logarithm of the stock price. Onnela et al. [13] constructed a network called the asset graph according to the rank of 477 stock’s correlation strength in the New York stock market. They studied its properties, such as topologically different growth types, number and size of clusters and the clustering coefficient. These properties, calculated from empirical data, are compared against those of a random graph. Tumminello et al. [15] investigated the planar maximally filtered graphs of the portfolio of the 300 most capitalized stocks traded at the New York Stock Exchange during the time period 2001–2003. Topological properties such as the average length of shortest paths, the betweenness and the degree were computed on different planar maximally filtered graphs generated by sampling the returns at different time horizons. Boginski et al. [16] constructed a stock market graph by analyzing daily fluctuations of 6546 financial instruments in the US stock markets during 500 consecutive trading days in 2000–2002. They conducted the statistical analysis of this graph and detected cliques and independent sets in this graph. The topological stability of a network against random failures and attacks is a very important research aspect of a complex network. The failures or attacks refer to removal of vertices or edges. The research results indicate that regular and random networks display comparative effects between error and attack tolerance. A small-world network is sensitive to long distance attacks [17]. Scale-free networks display a topological robustness against random node failures, but they are also fragile to intentional attacks [18]. The listed companies may have some extreme risks such as delisting or bankruptcy, to which corresponds removals of vertices in the stock correlation network. The removal of certain stocks will lead to topological changes of the holistic stock correlation network. The study on such topological changes can help us understand correlation patterns among stocks, thus it can be a good guide for risk management of stock investment. Nowadays, a great number of different stocks are traded in the Shanghai and Shenzhen stock market in China. According to trading data of these stocks, we construct a corresponding stock correlation network with a correlation threshold method. We present a detailed study of the properties of this network, including the topology structures and topological stability against random failures and attacks. Different from other network construction arithmetic, the correlation threshold method is convenient for studying inherent relationships between network characteristics and correlation threshold. The rest of this article is organized as follows. In Section 2 we describe the process of network construction and topology statistical quantities of the network. Section 3 is the empirical study and results. In the last section we present a few conclusions.

In this paper, we presented a detailed study of the properties of the stock correlation network. Finding components, cliques and independent sets in the network gives us a new tool for the analysis of the market structure by classifying the stocks into different groups. It would be helpful to investors for making decisions regarding their portfolios. Therefore, this technique is useful from both theoretical and practical points of view. The statistical analysis of the degree distribution of the network has shown that the power-law model is valid in financial networks. It confirms an amazing observation that many real-life massive networks arising in diverse applications have a similar power-law structure, which indicates that the global organization and evolution of massive datasets arising in various spheres of life follow similar laws and patterns. Stock correlation networks display a topological robustness against random node failures, but they are also fragile to intentional attacks. The result indicates that certain stocks having large degree are important for the price fluctuation correlation patterns of stocks. Such a network stability property would be also useful for portfolio investments and risk management. Although we addressed many issues in our analysis of the stock correlation network, there are still a lot of open problems. For instance, we can study other types of stock correlation network based on the data of the liquidity of financial instruments. It would be very interesting to study the properties of this network and compare it with the network considered in this paper. Such a comparison would be useful for studying the relationship between return and liquidity, which is one of the fundamental problems of the modern finance theory. Therefore, this research direction is very promising and important for a deeper understanding of the market’s behavior.