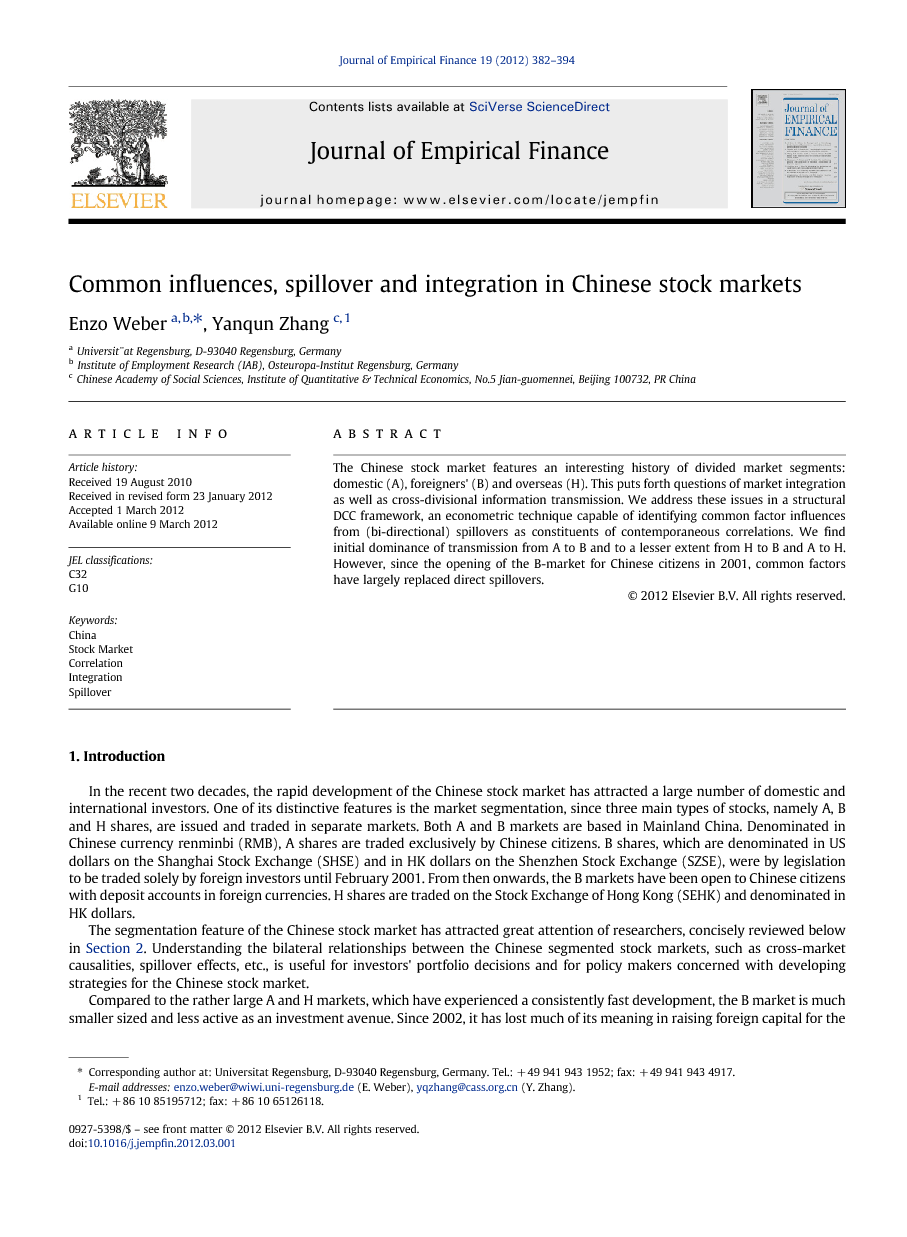 The Chinese stock market features an interesting history of divided market segments: domestic (A), foreigners' (B) and overseas (H). This puts forth questions of market integration as well as cross-divisional information transmission. We address these issues in a structural DCC framework, an econometric technique capable of identifying common factor influences from (bi-directional) spillovers as constituents of contemporaneous correlations. We find initial dominance of transmission from A to B and to a lesser extent from H to B and A to H. However, since the opening of the B-market for Chinese citizens in 2001, common factors have largely replaced direct spillovers.

In the recent two decades, the rapid development of the Chinese stock market has attracted a large number of domestic and international investors. One of its distinctive features is the market segmentation, since three main types of stocks, namely A, B and H shares, are issued and traded in separate markets. Both A and B markets are based in Mainland China. Denominated in Chinese currency renminbi (RMB), A shares are traded exclusively by Chinese citizens. B shares, which are denominated in US dollars on the Shanghai Stock Exchange (SHSE) and in HK dollars on the Shenzhen Stock Exchange (SZSE), were by legislation to be traded solely by foreign investors until February 2001. From then onwards, the B markets have been open to Chinese citizens with deposit accounts in foreign currencies. H shares are traded on the Stock Exchange of Hong Kong (SEHK) and denominated in HK dollars. The segmentation feature of the Chinese stock market has attracted great attention of researchers, concisely reviewed below in Section 2. Understanding the bilateral relationships between the Chinese segmented stock markets, such as cross-market causalities, spillover effects, etc., is useful for investors' portfolio decisions and for policy makers concerned with developing strategies for the Chinese stock market. Compared to the rather large A and H markets, which have experienced a consistently fast development, the B market is much smaller sized and less active as an investment avenue. Since 2002, it has lost much of its meaning in raising foreign capital for the domestic industry. This setting triggers the question whether the Chinese Securities Regulatory Commission shall support further independence of the B market or foster a merge into A or H market.2 For this, investigating the nature and scope of market interaction and integration sheds light on the issue of informational leadership between the A, B and H markets. Returns of the different Chinese stock segments are significantly correlated. This paper seeks to identify the structural mechanisms underlying these correlations. Thereby, a broad literature on theoretical and empirical finance concludes that major price adjustment of liquid assets happens at least within one day. This is formalised in the random walk hypothesis, which implies returns uncorrelated with lagged variables. Whether or not this hypothesis is exactly fulfilled, in daily data most commonalities in terms of cross-correlations appear to be contemporaneous. The main contribution of the underlying paper lies in disentangling the sources of these correlations between the different Chinese stock markets. Such sources can be given by common factors as well as direct spillovers in one and in the other direction. Common factors would be reflected in correlation of the innovations to the different return series. In this respect, we use the concept of market integration. In contrast, spillovers appear in a second round when the shocks already have become manifest. Logically, these transmission effects are based on informational leadership in the sense that observed index movements in one market trigger reactions in another market. In sum, one measurable correlation can be traced back to three potential sources. This makes high demands on econometric techniques for identification of fully simultaneous systems. In this respect, we are reaching beyond relevant existing literature (see Section 2 below) that investigates interactions and causalities between different markets in reduced-form setups by means of dynamic correlations, cross-autocorrelations and Granger causality. Concerning methodology, we adopt and modify the structural dynamic conditional correlation (SDCC) framework proposed by Weber, 2008b and Weber, 2010. This allows approaching the far-reaching questions regarding the deep underlying market structure as explained above. Daily market index series are deployed for this examination. The sample is divided into two sub-periods, 1997–2001 and 2002–2008. With this structure we can grasp the effects of the new policy, allowing domestic investors to access the B market, which was implemented in February 2001. The outcome of our empirical examination shows that before 2002, a strong contemporaneous spillover from A to B existed, whilst the unconditional correlation of the structural innovations is not significant. This indicates that commonality between the A and B market was primarily based on the informational leading role of the A market. In the second period, the large contemporaneous spillover from A to B is replaced by a considerable fundamental correlation, let alone a relatively small spillover from B to A. Evidently, common factors now dominate the comovement of the A and B market. Combined with the cointegrating relation found in the second period between the A and B market, we conclude that the two markets have increasingly integrated. Thereby, we use the notion of integration for the case that two of the Chinese markets are simultaneously hit by new information, and besides, might tend together in the long run. For the B–H and A–H pairings, we find similar patterns: The first sub-period is dominated by causal spillovers (from H to B, respectively from A to H), which give way to correlated structural innovations after 2001. However, the interaction between B and H, and even more so between A and H, is far less developed than in the A–B case. The paper is organized as follows: Section 2 briefly introduces the history of the Chinese stock market and offers a literature review. Section 3 elaborates the methodology of the SDCC model, while empirical results are reported in Section 4. Finally, the last section summarizes and highlights our findings.

In this paper, we have identified sources of contemporaneous correlation of stock markets, which can originate in both common influences hitting the markets and spillover effects between them. This way, we have empirically analysed integration and informational transmission between the Chinese segmented stock markets. The sample is divided into two sub-periods, before and after 2002, in order to characterize the impact of the B market opening to Chinese citizens. Methodologically, we adapted the new SDCC framework of Weber, 2008b and Weber, 2010. The outcome of our empirical examination shows that in general the integration of the A, B and H markets has significantly deepened in the second period. The A and B markets are more closely integrated compared to A and H or B and H. Before 2002, the main contribution to the contemporaneous return correlations stemmed from causal spillovers. In contrast, since 2002 common factors dominate the correlation of the markets. Concerning the interactions between the A and B markets, the spillover effects from A to B prior to 2002 indicate that commonality between A and B was primarily based on the leading role of A in terms of informational advantages. Since the B market was opened to Chinese citizens, common influences have become the main source of the rising correlation. Compared to this process of integration, the H market is still more or less segmented even after 2002. In the first period, transmission runs from A to H and from H to B, whereas common influences are insignificant. These spillovers are replaced by fundamental correlations of the innovations in the second period, which are however limited in size. Including additional observable regressors into the system did not change the simultaneous model structure by much. We mainly find that Hang Seng and Straits Times returns affect H returns, especially after 2002. Obviously, the H market is to some extent linked to other important Asian stock markets, where the SEHK naturally proves most influential. In contrast, the A and B segments are subject to certain influences from the development of emerging equity markets. In a structural VECM, cointegration between the indices of the two markets A and B occurs since 2002. While the price of the A market is nearly weakly exogenous, the B price adjusts with respect to cointegration deviations; in the long run, the A market determines the common stochastic trend. In the sense of Hasbrouck (1995), this finding leads to the interpretation that the discovery of the efficient price takes place in the A market. This is likely to provide the prerequisite for a potential merge of the B into the A market, a strategy further supported by the evidence that both markets are moving towards close integration in both long and short run since 2002. The H market remains separate from the markets A and B for the time being.