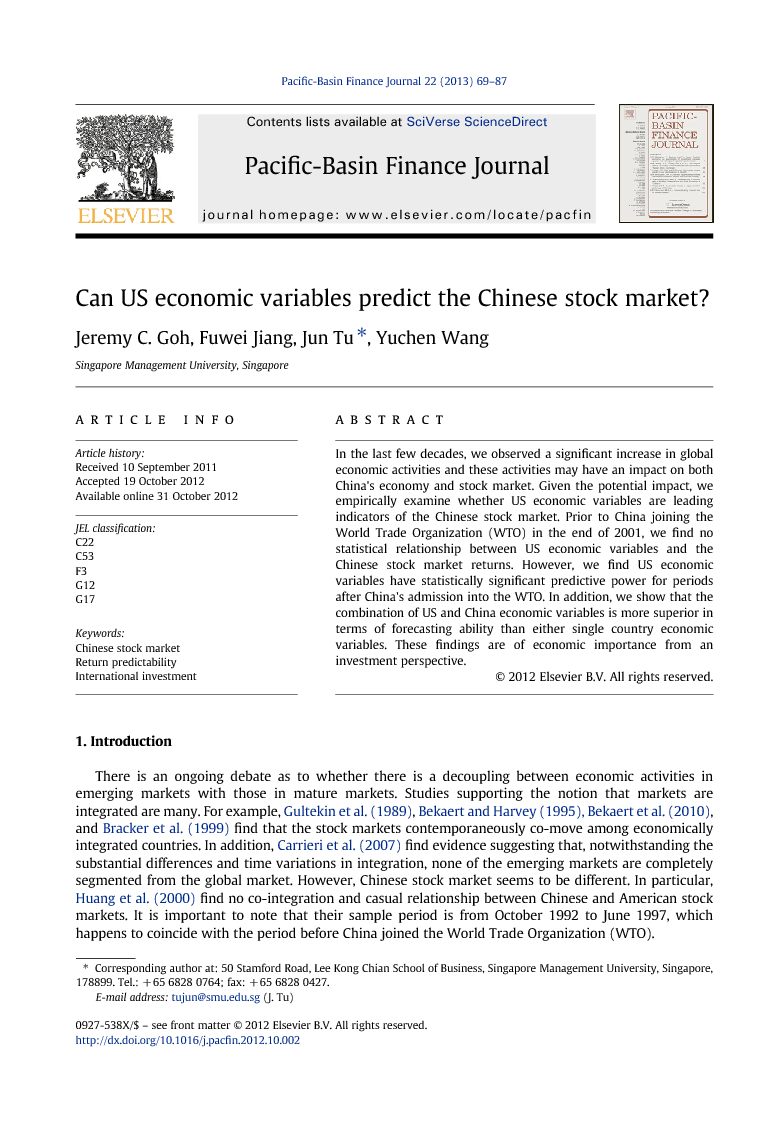 The relative importance of the world economy for China has increased significantly over the last few decades, especially after China officially entered the WTO in December 2001. Joining the WTO meant more international trade for Chinese exporters. As a result of this move, it is not surprising to see increased integration between the Chinese and Global economy. Another effect of joining the WTO is the establishment of a freer and open financial market.18 Hence, it is plausible that China joining the WTO may result in the Chinese stock market may be significantly affected by the world economy and/or the US economy. In this paper, we examine whether the US economic variables are leading indicators of the Chinese stock market, especially after 2001. Our results show that US economic variables are indeed good leading indicators for the Chinese stock market after China joined the WTO. Prior to that, the predictive ability of these variables are statistically insignificant. One explanation for our findings is the increased integration of the Chinese economy to the world economy after China joined the WTO in 2001. In addition, we show that the US economic variables can be used in conjunction with the China economic variables to enhance return forecasts for the Chinese stock market. Finally, our out-of-sample results indicate extensive predictive power of the US economic variables in real time, which turns out to be economically important from an investment perspective as indicated by significant utility and Sharpe ratio gains. Our findings suggest that conventional predictive regression models for Chinese stock market ignore important information in US (global) economic variables, and investors interested in investing in the Chinese stock market should pay attention to both US and China economic variables. Our results also have potentially important implications for asset pricing models for the Chinese stock market as well as cost of capital calculation. Acknowledgments We are grateful to Charles Cao (the editor), two anonymous referees, Hendrik Bessembinder, Yin-Wong Cheung, Chiraphol New Chiyachantana, Dong He, Wei Huang, Tuuli Koivu, Peter Phillips, David E. Rapach, Laura Solanko, Qian Sun, Kun Wang (2011 AFBC discussant), Yexiao Xu, Jun Yu, Yongding Yu, Bohui Zhang (2011 CICF discussant), Chu Zhang, Xuechun Zhang, Guofu Zhou, Hengfu Zou and session and seminar participants at 2011 China International Conference in Finance, 2011 Australasian Finance and Banking Conference, HU-HUE-SKBI Tripartite Conference, Bank of Finland Workshop on China's Financial Market and Internationalization of RMB, International Conference for the Economic and Financial Challenges and Issues in the Asia-Pacific Countries at Southwestern University of Finance and Economics, and Singapore Management University. Tu acknowledges financial support for this project from Sing Lun Fellowship.