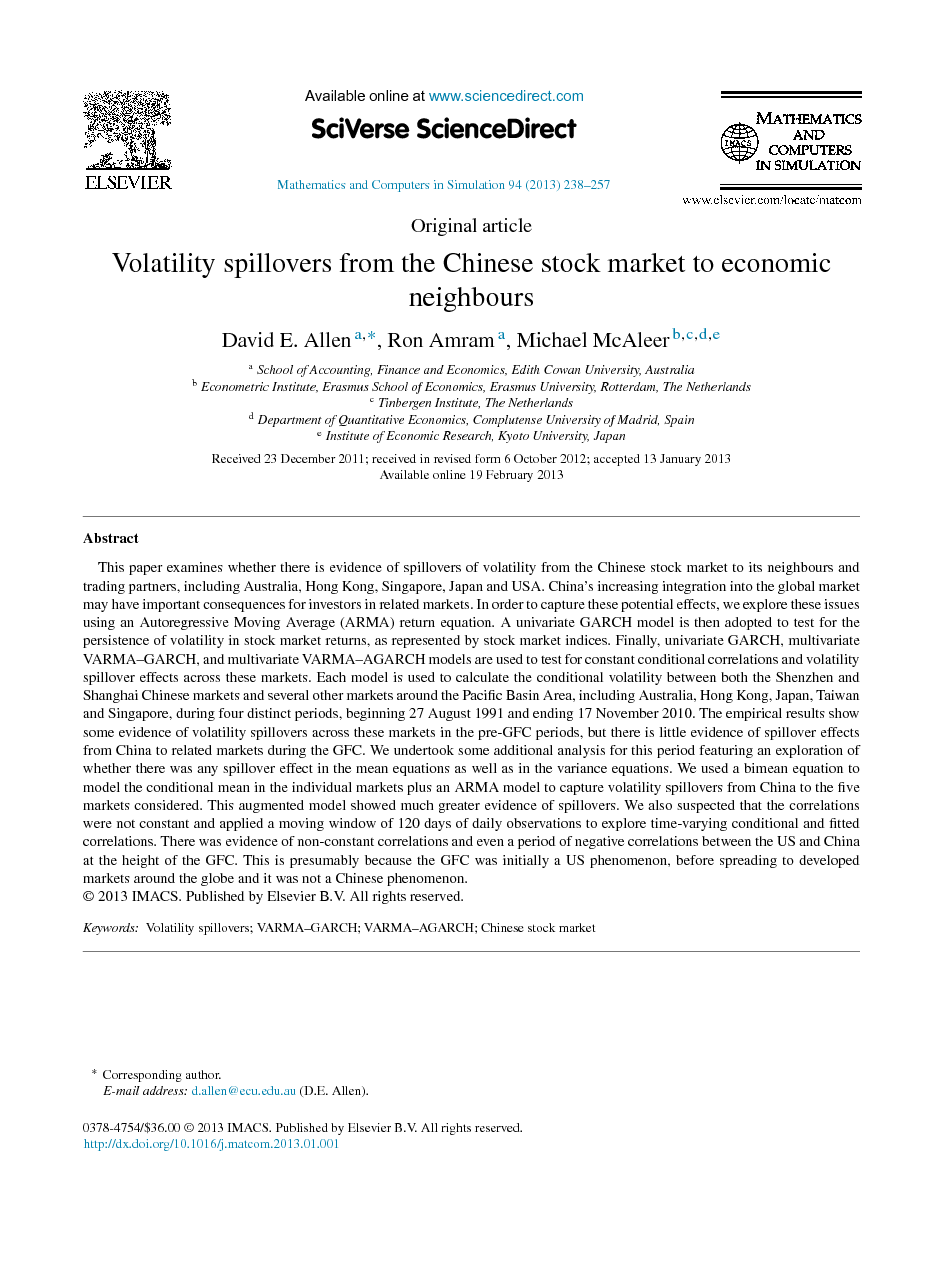 This paper examines whether there is evidence of spillovers of volatility from the Chinese stock market to its neighbours and trading partners, including Australia, Hong Kong, Singapore, Japan and USA. China's increasing integration into the global market may have important consequences for investors in related markets. In order to capture these potential effects, we explore these issues using an Autoregressive Moving Average (ARMA) return equation. A univariate GARCH model is then adopted to test for the persistence of volatility in stock market returns, as represented by stock market indices. Finally, univariate GARCH, multivariate VARMA–GARCH, and multivariate VARMA–AGARCH models are used to test for constant conditional correlations and volatility spillover effects across these markets. Each model is used to calculate the conditional volatility between both the Shenzhen and Shanghai Chinese markets and several other markets around the Pacific Basin Area, including Australia, Hong Kong, Japan, Taiwan and Singapore, during four distinct periods, beginning 27 August 1991 and ending 17 November 2010. The empirical results show some evidence of volatility spillovers across these markets in the pre-GFC periods, but there is little evidence of spillover effects from China to related markets during the GFC. We undertook some additional analysis for this period featuring an exploration of whether there was any spillover effect in the mean equations as well as in the variance equations. We used a bimean equation to model the conditional mean in the individual markets plus an ARMA model to capture volatility spillovers from China to the five markets considered. This augmented model showed much greater evidence of spillovers. We also suspected that the correlations were not constant and applied a moving window of 120 days of daily observations to explore time-varying conditional and fitted correlations. There was evidence of non-constant correlations and even a period of negative correlations between the US and China at the height of the GFC. This is presumably because the GFC was initially a US phenomenon, before spreading to developed markets around the globe and it was not a Chinese phenomenon.

Overall, the three models give fairly similar results. The GARCH (1,1) demonstrated evidence of a volatility spillovers in period 1 for three markets, but only for Japan in period 2, nothing in period 3, and only for Singapore in period 4. Furthermore, on the few occasions where the spillover proved to be statistically significant, the size of the spillover (as indicated by the size of the β2 coefficient) and the predictive power of the equations (as indicated by the value of R-squared) were very small. However, all of the markets demonstrated a significant GARCH effect, revealing that their current volatility can be explained to some degree by their lagged volatility. The degree of impact of lagged volatility on current volatility changed from market to market, but in most cases the β1 coefficient remained around 0.9. The VARMA–GARCH model produced similar results. The model is a multivariate model, where the equation relates a market's volatility to its own lagged volatility and lagged residual, as well as those of the China. The VARMA–GARCH revealed that, although all of the markets tested, with the exception of the USA, showed some evidence of volatility spillovers from China during periods 1 and/or 2, none showed any evidence of spillovers during periods 3 and 4. However, all of the markets showed significant GARCH effects, meaning that their volatility did depend on their own lagged squared residual and volatility. The VARMA–AGARCH produced different results yet again. The VARMA–AGARCH is a multivariate model, which is an extension of the VARMA–GARCH model. However it is an asymmetric model – it relates a market's volatility to it's own lagged volatility, but has two separate coefficients for negative and positive returns, as well as the lagged squared residual and lagged volatility for the China. All of the markets showed a significant GARCH effects for each period. The different markets showed different relationships for positive and negative returns throughout the period. However, one common theme was the positive relationship between negative returns and volatility in period 3 and an even greater consistency in period 4. A common prior would be that ‘bad news’ increases volatility in the market while ‘good news’, despite being significant in HK, SNG and JPN in period 2 and significant in most markets in period 3, should not have the same impact on volatility as ‘bad news’. This seems to be the case, as ‘bad news’ had universal significance in periods 3 and 4.