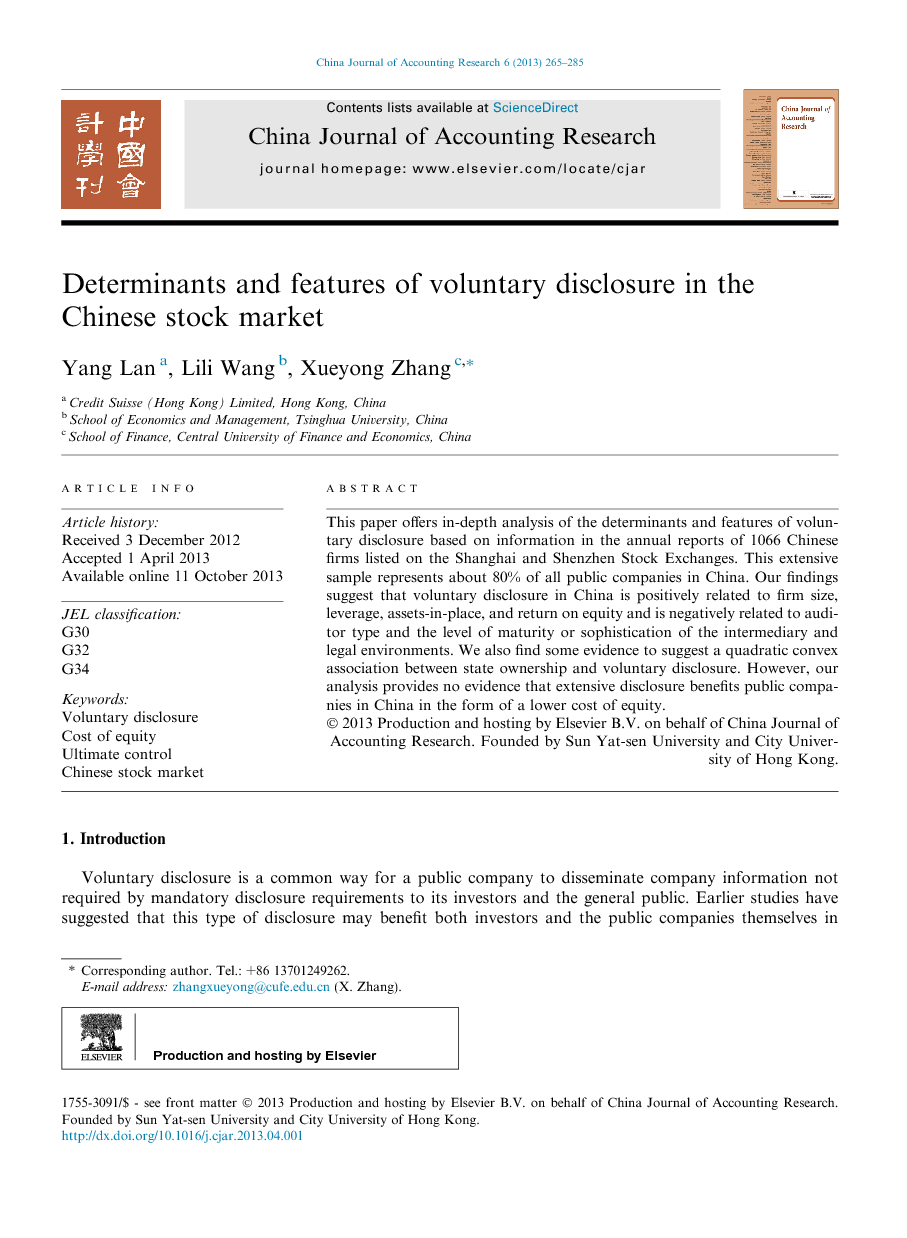 This paper offers in-depth analysis of the determinants and features of voluntary disclosure based on information in the annual reports of 1066 Chinese firms listed on the Shanghai and Shenzhen Stock Exchanges. This extensive sample represents about 80% of all public companies in China. Our findings suggest that voluntary disclosure in China is positively related to firm size, leverage, assets-in-place, and return on equity and is negatively related to auditor type and the level of maturity or sophistication of the intermediary and legal environments. We also find some evidence to suggest a quadratic convex association between state ownership and voluntary disclosure. However, our analysis provides no evidence that extensive disclosure benefits public companies in China in the form of a lower cost of equity.

This study investigates the determinants and features of voluntary disclosure among companies listed on the Chinese stock market. Using a sample representing more than 80% of all public companies in China, we find evidence that differs from the findings of previous studies employing smaller samples, indicating that the Chinese stock market has a number of distinct features in connection with voluntary disclosure. In tests of the entire sample, we find that firm size, leverage, assets-in-place, ROE, and ownership diffusion are significantly associated with voluntary disclosure and that auditor type and the intermediary and legal environments are highly significantly associated with voluntary disclosure. The sign on auditor type does not conform to previous studies, suggesting a different situation in China. We also find a quadratic convex association between state ownership and disclosure level, which helps to explain the inclusive empirical evidence presented by Xiao et al. (2004) and Wang et al. (2008). When subsamples are tested, many of the explanatory variables lose their significance in one or both groups. This disparity suggests a significant difference in firm characteristics and accounting policy preferences between government and privately controlled firms. More importantly, the signs of the coefficients of state ownership in these two regressions are in opposite directions. The disclosure level decreases with state ownership in the privately controlled subsample, but increases with it in the government-controlled subsample, revealing a clear quadratic relationship. Furthermore, voluntary disclosure exerts no significant influence on the cost of equity, which casts doubt on the relevance of the voluntary information disclosed in annual reports to investors’ decisions in the Chinese context. The findings of this study will help Chinese regulators to fine-tune the country’s regulatory policies to better suit the needs of the market. For instance, both state-owned businesses with a lower proportion of state ownership and private businesses with a higher proportion of such ownership may require more regulation to guarantee transparency. The findings will also benefit investors by providing them with a better understanding of the credibility of the annual reports supplied by companies with certain characteristics. The irrelevance of voluntary disclosure to the cost of equity reveals several deficiencies in the Chinese stock market and points to the need for better regulation and reform. These potential implications of our findings suggest the desirability of future research that further refines and broadens our analysis. Three limitations of the study are particularly worth mentioning. First, the study involved a one-year test. Although industry and ultimate controller biases are controlled for, it is possible that there are year-specific influences, particularly with regard to the cost of equity. Second, although most of our regression models are statistically significant, their range of adjusted R-squares suggests that other potential determinants of voluntary disclosure may exist. Finally, we focus on only one form of disclosure vehicle, the annual report. Additional studies could be conducted to analyze other vehicles, such as quarterly reports and press releases. What is the benefit of voluntary disclosure for Chinese firms? We posit two possible benefits for testing in further research: future seasoned equity offerings (SEOs) and a lower cost of equity in the future. First, as Chen and Wang (2007) report, Chinese listed firms prefer to issue additional shares after their initial public offering through SEOs. To attract investors for future SEOs, firms have the motivation to disclose more information than is mandatory. Second, although we are unable to find any evidence to indicate that voluntary disclosure affects the cost of equity in this study, the Chinese stock market is developing very quickly. As investors become more experienced, it is likely that firms engaging in more extensive voluntary disclosure will benefit in terms of a lower cost of equity in the future.