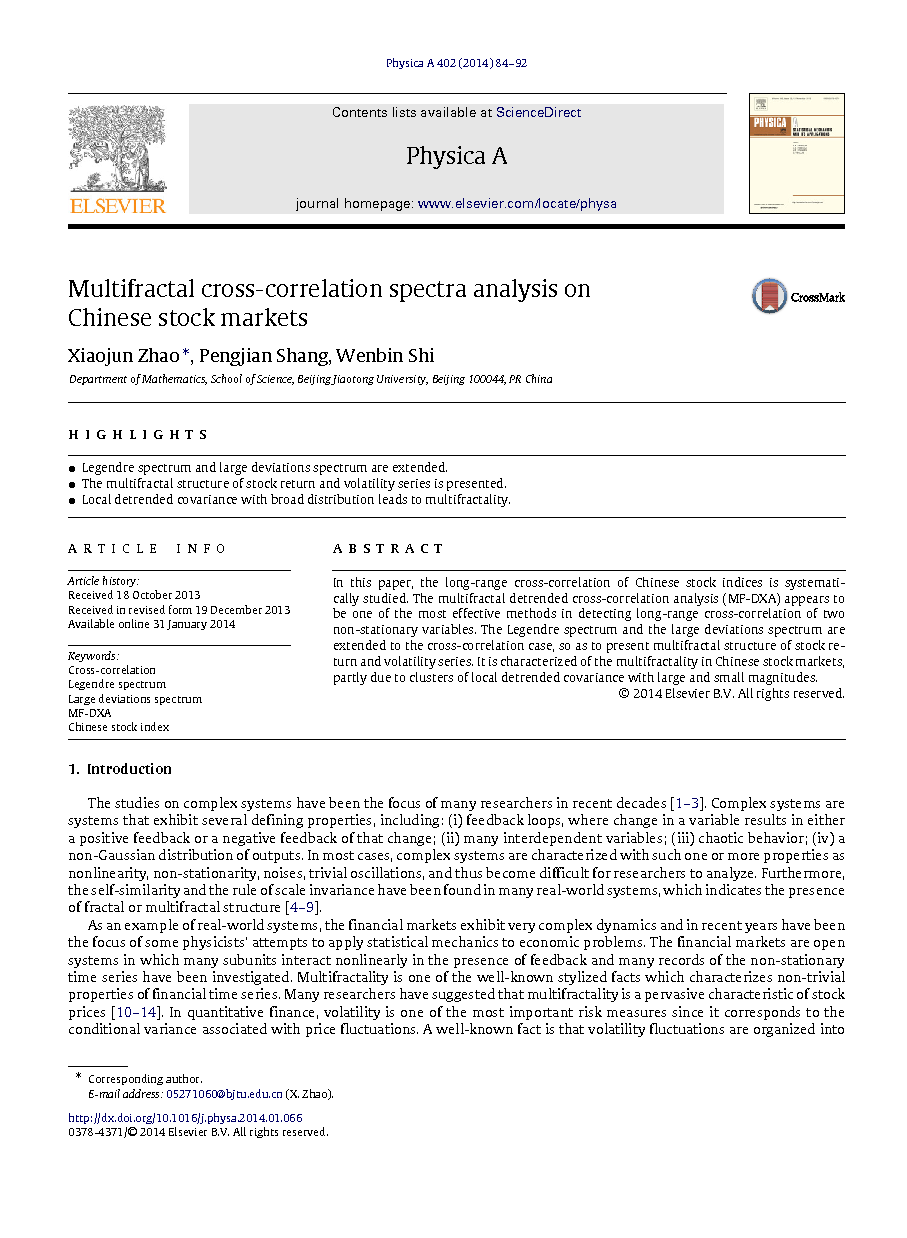 The studies on complex systems have been the focus of many researchers in recent decades [1], [2] and [3]. Complex systems are systems that exhibit several defining properties, including: (i) feedback loops, where change in a variable results in either a positive feedback or a negative feedback of that change; (ii) many interdependent variables; (iii) chaotic behavior; (iv) a non-Gaussian distribution of outputs. In most cases, complex systems are characterized with such one or more properties as nonlinearity, non-stationarity, noises, trivial oscillations, and thus become difficult for researchers to analyze. Furthermore, the self-similarity and the rule of scale invariance have been found in many real-world systems, which indicates the presence of fractal or multifractal structure [4], [5], [6], [7], [8] and [9]. As an example of real-world systems, the financial markets exhibit very complex dynamics and in recent years have been the focus of some physicists’ attempts to apply statistical mechanics to economic problems. The financial markets are open systems in which many subunits interact nonlinearly in the presence of feedback and many records of the non-stationary time series have been investigated. Multifractality is one of the well-known stylized facts which characterizes non-trivial properties of financial time series. Many researchers have suggested that multifractality is a pervasive characteristic of stock prices [10], [11], [12], [13] and [14]. In quantitative finance, volatility is one of the most important risk measures since it corresponds to the conditional variance associated with price fluctuations. A well-known fact is that volatility fluctuations are organized into persistent clusters [15]. It is previously shown that the multifractality degree is related to the stage of market development. More precisely, higher multifractality is associated with a less developed market [16] and [17]. It is a rather common behavior of real-world systems that they do not operate independently. Cross-correlation of variables between relevant systems is thus frequently observed. Examples include the heart rate and respiratory rate in biological identities, the air temperature and air humidity in atmospheric environment, the road occupancy and vehicle speed in traffic network, the trading price and trading volume in stock markets, etc. [18], [19], [20], [21], [22], [23], [24], [25] and [26]. In this paper, we focus to study the existence of cross-correlation on Chinese stock prices, mainly on the stock return and volatility series. We refer to three methods, to estimate the long-range cross-correlation of two variables. They include the linear cross-correlation function, the multifractal detrended cross-correlation analysis (MF-DXA), and the multifractal height cross-correlation analysis (MF-HXA). These methods are applied to the artificial variables, the theoretical results of which can be prior inferred, to determine which one is more effective. And for two non-stationary variables, the MF-DXA method seems to be the most effective one, both for monofractal and multifractal cases. Another fundamental concern is to study the possible fractal structure of the long-range cross-correlation. The Legendre spectrum and the large deviations spectrum were extensively studied on the auto-correlation analysis of single variable (Fig. 4). Here we extend them to measure the structure of cross-correlation. Although different measurements are estimated from different views, they present rather similar results. It is a rather important practice for statistical physics methods applied in real-world systems, as only if at least two independent methods consistently reveal the structure of cross-correlation, one can be sure that the variables are indeed monofractal or multifractal. In Chinese stock markets, the multifractality of return and volatility series is characterized.

We estimate the long-range cross-correlation between two non-stationary variables. MF-DXA method presents accurate results for the artificial variables, which are generated by the ARFIMA processes and the binomial multifractal cascade processes. In the multifractal spectrum analysis, the Legendre spectrum and the large deviations spectrum are introduced to detect the structure of cross-correlation. The multifractality is characterized in the stock price return and volatility series, due to the clusters of local detrended covariance with large magnitudes (in the year of 2006–2008) and small magnitudes (2002–2005).