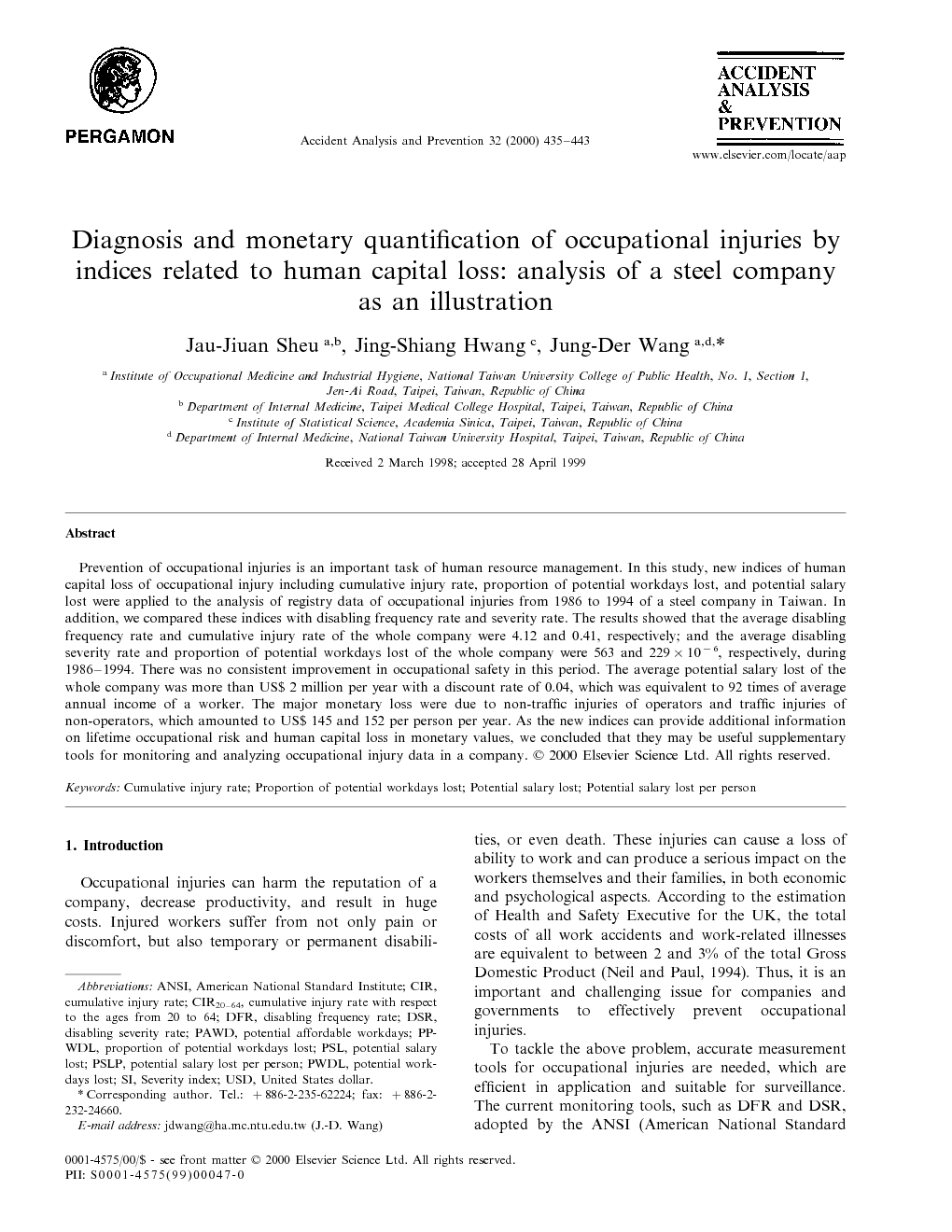 Prevention of occupational injuries is an important task of human resource management. In this study, new indices of human capital loss of occupational injury including cumulative injury rate, proportion of potential workdays lost, and potential salary lost were applied to the analysis of registry data of occupational injuries from 1986 to 1994 of a steel company in Taiwan. In addition, we compared these indices with disabling frequency rate and severity rate. The results showed that the average disabling frequency rate and cumulative injury rate of the whole company were 4.12 and 0.41, respectively; and the average disabling severity rate and proportion of potential workdays lost of the whole company were 563 and 229×10−6, respectively, during 1986–1994. There was no consistent improvement in occupational safety in this period. The average potential salary lost of the whole company was more than US$ 2 million per year with a discount rate of 0.04, which was equivalent to 92 times of average annual income of a worker. The major monetary loss were due to non-traffic injuries of operators and traffic injuries of non-operators, which amounted to US$ 145 and 152 per person per year. As the new indices can provide additional information on lifetime occupational risk and human capital loss in monetary values, we concluded that they may be useful supplementary tools for monitoring and analyzing occupational injury data in a company.

Occupational injuries can harm the reputation of a company, decrease productivity, and result in huge costs. Injured workers suffer from not only pain or discomfort, but also temporary or permanent disabilities, or even death. These injuries can cause a loss of ability to work and can produce a serious impact on the workers themselves and their families, in both economic and psychological aspects. According to the estimation of Health and Safety Executive for the UK, the total costs of all work accidents and work-related illnesses are equivalent to between 2 and 3% of the total Gross Domestic Product (Neil and Paul, 1994). Thus, it is an important and challenging issue for companies and governments to effectively prevent occupational injuries. To tackle the above problem, accurate measurement tools for occupational injuries are needed, which are efficient in application and suitable for surveillance. The current monitoring tools, such as DFR and DSR, adopted by the ANSI (American National Standard Institute, 1967) and widely used throughout the world for more than several decades (Grimaldi and Simonds, 1975), have their limitations. As rates of disabling occupational injuries were different among different age strata in Taiwan (Liu and Wang, 1992 and Liu and Wang, 1993), DFR, which does not take age of employment into account, can not interpret the lifetime risk of a worker, nor is it suitable for direct comparison among different mills or through time in years in a company. DSR, which counts the loss of workdays for death and permanent disability at a fixed pre-set charge regardless of individual differences in the age when injury occurred and remaining working capability, can not properly reflect future productivity loss and estimate the economic cost of occupational injuries of a company. Thus, although these two indices have been used extensively, they are not usually taken very seriously by the management for shaping occupational safety policy in a company unless there is a tremendous change in these figures. Chang and Wang recently developed CIR, PPWDL, and PSL as supplementary indices to quantify the loss of occupational injuries in the aspect of human capital loss (Chang and Wang, 1995). The newly developed indices have been used to see the time trends in occupational injuries for different industrial sectors at a national level (Chang and Wang, 1997). However, these indices have not yet been applied to show their usefulness in the analysis of occupational injuries in a firm or company. In this article, we applied the above indices to diagnose the trends and quantify the monetary loss of occupational injuries of a steelmaking company in Taiwan and compared the performance between the new indices and ANSI's indices.