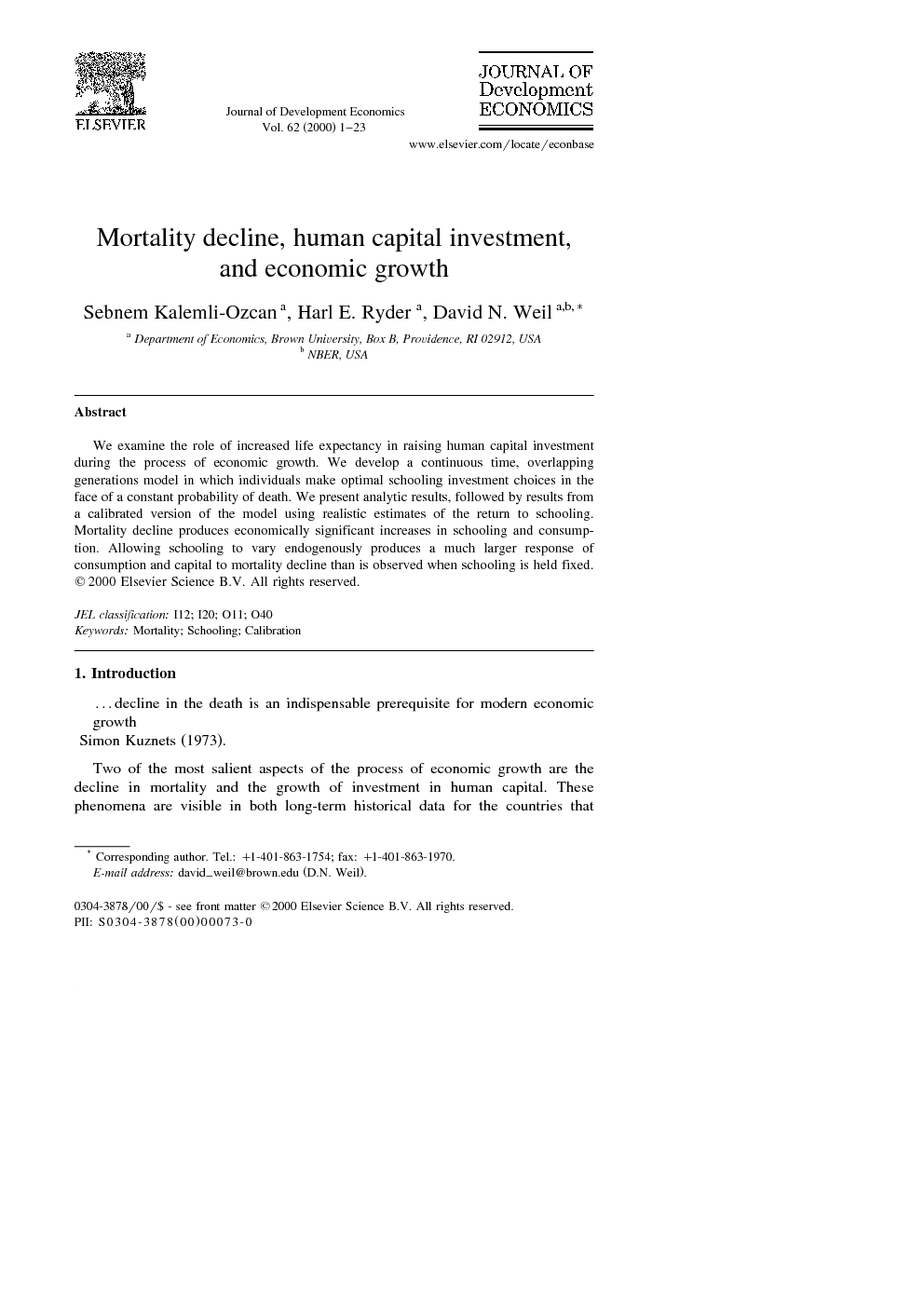 We examine the role of increased life expectancy in raising human capital investment during the process of economic growth. We develop a continuous time, overlapping generations model in which individuals make optimal schooling investment choices in the face of a constant probability of death. We present analytic results, followed by results from a calibrated version of the model using realistic estimates of the return to schooling. Mortality decline produces economically significant increases in schooling and consumption. Allowing schooling to vary endogenously produces a much larger response of consumption and capital to mortality decline than is observed when schooling is held fixed.

Two of the most salient aspects of the process of economic growth are the decline in mortality and the growth of investment in human capital. These phenomena are visible in both long-term historical data for the countries that developed early as well as broadly, and in more accelerated form, in the post-World War II period. Over the 19th century, e.g., life expectancy at birth in England rose from 37.3 to 48.2 years, and by 1930, it had reached 60.8. The average number of years of schooling rose from 2.3 for the cohort born 1801–1805 to 9.1 for the cohort born 1897–1906.1 Averaging across lower income countries, life expectancy at birth rose from 42.2 in 1950 to 63.3 in 1990. Gross secondary school enrollment increased from 17.1% in 1960 to 46.9% in 1990.2 Both the decline in mortality and the increase in schooling are intimately related to several aspects of the growth process. Mortality fell both directly because of higher incomes (which led to better nutrition) and because of advances in health technology. Mortality decline, in turn, triggered the process of demographic transition, in which, with a varying lag, fertility rates fell.3 The increase in human capital accumulation has been attributed to an increase in the return to schooling Foster and Rosenzweig, 1996 and Mincer, 1996. Higher investment in human capital has in turn been linked to changes in fertility behavior, via a quality–quantity tradeoff (Becker and Lewis, 1973); to an increase in the growth rate of technology (Lucas, 1988); and directly to a higher level of output (Mankiw et al., 1992). In this paper, we look at a direct relationship between mortality and human capital accumulation. Specifically, we study the effect of mortality decline in raising human capital accumulation by increasing the horizon over which investments in schooling will be paid off. Although much of the decline in mortality has been in infancy, before any investment in schooling will have taken place, there have also been significant declines in mortality later in life. For example, in Sweden, male life expectancy at age 5 rose from 48.3 to 57.7 between 1800 and 1900. Over the same period, life expectancy at birth rose from 35.9 to 54.3. In India, male life expectancy at age 10 rose from 39.0 to 48.8 over the period 1951–1971. Over the same period, male life expectancy at birth rose from 32.4 to 46.4.4 The effect of mortality on education has been investigated both empirically and theoretically. Ram and Schultz (1979) argued that improvements in mortality were an important incentive to increase investment in education, and that the post-war experience of India was consistent with this incentive effect being significant. Preston (1980) calculated the degree to which reductions in mortality raised the internal rate of return to investments in education, but found that increases in the return to schooling were not sufficient to explain large increases in enrollment. Meltzer (1992) extended Preston's work, arguing that the elasticity of enrollment with respect to rate of return was sufficiently large that mortality-induced increases in returns could indeed explain large movements in enrollment. Meltzer also argued that reductions in morbidity, which have accompanied declining mortality, have further raised the return to investments in schooling. Two papers have incorporated this effect of life expectancy into general equilibrium models. Ehrlich and Lui (1991) embedded the effect of changing mortality in an overlapping generations model in which children provide old age support for their parents. In the model, improvements in longevity lower fertility, raise educational investment, and raise the long-run growth rate of output. Ehrlich and Lui also presented evidence on the effects of mortality on growth and fertility that is consistent with their model. Meltzer (1992) extended the model of human capital, fertility, and growth of Becker et al. (1990) by introducing a relationship between mortality and human capital investment. He showed that mortality decline may promote economic growth through an increase in the educational investment. In both the Ehrlich–Lui and Meltzer models, time is discrete, and individuals live a maximum of three periods. In this paper, we examine the relation between mortality and human capital investment using a variant of the continuous time, overlapping generations model of Blanchard (1985). Individuals face a constant probability of death, and choose an optimal level of schooling to maximize the discounted value of expected consumption. By using a simple demographic structure, we are able to aggregate across generations and solve for general equilibrium. We can thus sort out the direct effects of mortality decline on capital accumulation, interest rates, and labor supply from the effects of increased schooling that is induced by mortality decline. Further, by using a model with realistic time periods, we are able to use estimates of the return to schooling in a calibrated version of the model. The rest of this paper is structured as follows. In Section 2, we introduce our model of schooling and growth. We first analyze the model in partial equilibrium, with constant wage and interest rates, and then turn to general equilibrium analysis, concentrating on the steady state. In Section 3, we conduct comparative static analyses of the effect of mortality change on the steady state, comparing the case where schooling responds to changes in mortality to the case where schooling is fixed. We present analytic results, followed by results from a calibrated version of the model using realistic estimates of the return to schooling. Section 4 concludes.

Reduced mortality and increased investment in education are two of the most significant aspects of the process of economic growth. In this paper, we have examined the effects of declining mortality on the incentive to invest in education. Higher life expectancy raises the optimal quantity of schooling because investments in education will earn a return over a longer period of time. The general equilibrium effect of reduced interest rates enhances this effect. Using empirical estimates of the return to schooling, we showed that the magnitude of the effect of lower mortality on the length of schooling is economically significant. We also showed that the effect of lower mortality on consumption is significantly larger in the case where schooling is endogenous than in the case where schooling is taken to be fixed. This is another way of showing that the mortality-induced increase in education is a important consideration. Our analysis leaves many questions unanswered, however. First, we have modeled the change in mortality as being completely exogenous. Obviously, this leaves out an important link running from higher income to lower mortality. In the context of our model, such a link would produce a multiplier effect from exogenous shocks to either income or mortality. For example, an exogenous shock to income would lower mortality and increase the optimal quantity of schooling. Higher schooling would further raise income, producing a feedback effect. While such a model could be important for analyzing the historical experience of the richest countries, however, it must be noted that the large changes in mortality in the post-World War II developing world have not been the product of higher income (see Preston, 1978). A second limitation of our analysis is that we have restricted education's role only as a factor of production, thus not allowing for any interaction between education and technology. Indeed, our model is one in which technology is stagnant. However, recent literature has drawn a link from increased education to a higher rate of technological progress. Thus, a more extensive model could draw a link all the way from lower mortality to more rapid technological growth. Finally, and possibly most significantly, our model of education and mortality has ignored any interaction with the fertility decision. Lower mortality and higher education have both been important correlates of reduced fertility. More educated parents face a higher opportunity cost of child-rearing, and in a low mortality environment, parents are more likely to substitute child quality for child quantity. Thus, lowered mortality will have mutually reinforcing effects that lower fertility and raise education.