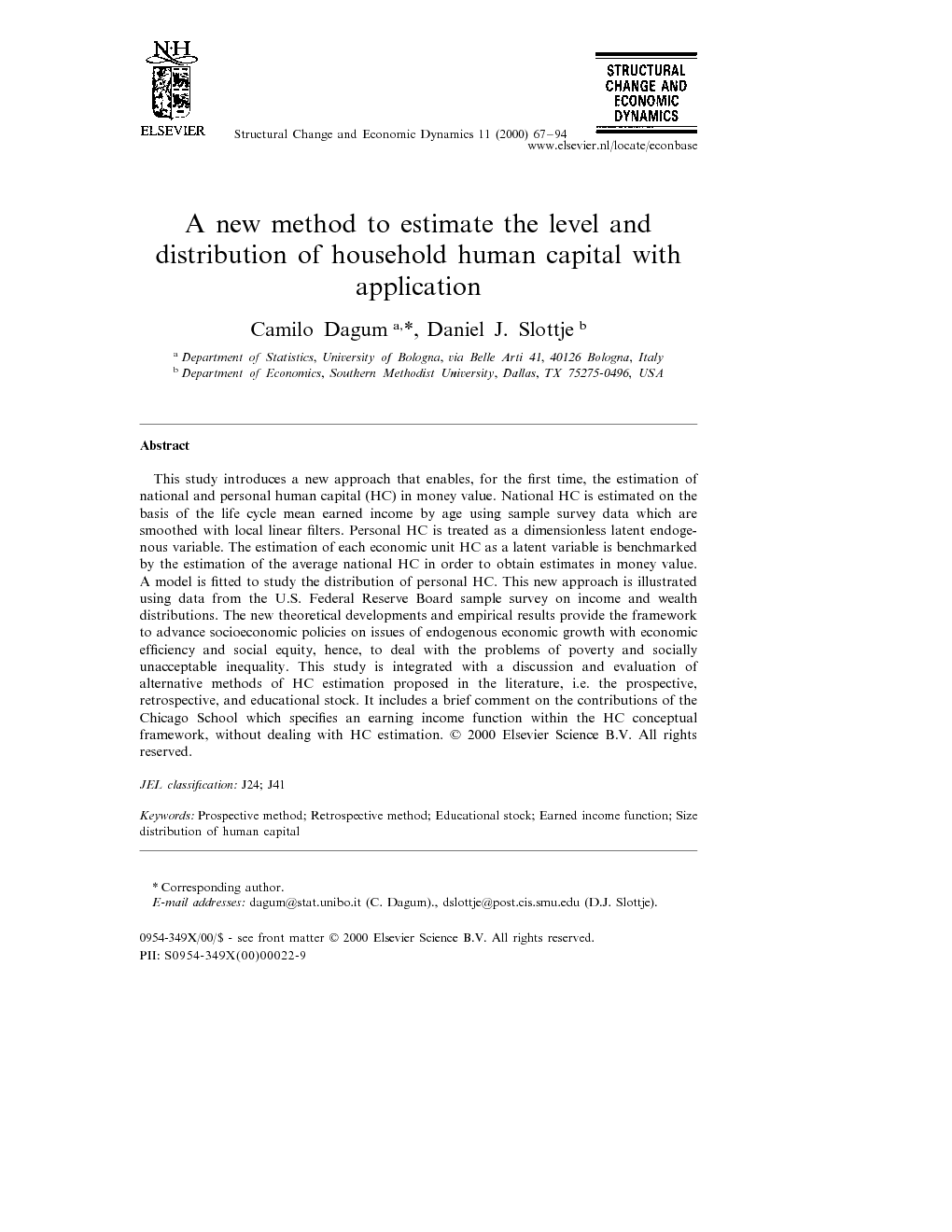 This study introduces a new approach that enables, for the first time, the estimation of national and personal human capital (HC) in money value. National HC is estimated on the basis of the life cycle mean earned income by age using sample survey data which are smoothed with local linear filters. Personal HC is treated as a dimensionless latent endogenous variable. The estimation of each economic unit HC as a latent variable is benchmarked by the estimation of the average national HC in order to obtain estimates in money value. A model is fitted to study the distribution of personal HC. This new approach is illustrated using data from the U.S. Federal Reserve Board sample survey on income and wealth distributions. The new theoretical developments and empirical results provide the framework to advance socioeconomic policies on issues of endogenous economic growth with economic efficiency and social equity, hence, to deal with the problems of poverty and socially unacceptable inequality. This study is integrated with a discussion and evaluation of alternative methods of HC estimation proposed in the literature, i.e. the prospective, retrospective, and educational stock. It includes a brief comment on the contributions of the Chicago School which specifies an earning income function within the HC conceptual framework, without dealing with HC estimation.

The concept of functional income distribution was introduced by Ricardo (1817). The first research on the personal (size) distribution of income was done by Pareto, 1895, Pareto, 1896 and Pareto, 1897. He was the first to specify, estimate and analyze a model of income distribution. Both the functional and personal income distributions are assumed to be generated by two variable factors, human capital (that generates earned income); and capital (that generates other incomes). The theoretical production function that underlies both of these concepts of distribution includes labor as an argument. Unfortunately, labor is generally measured in these production functions as man-hours worked or as persons employed full-time per year. While it is useful to partition the labor force (into full-time, part-time and unemployed workers) for labor market studies, it can be misleading to do so when analyzing economic processes involving production, growth, distribution and social welfare. The usual specification of the production function is, equation(1a) Q=F(L,K) In virtually all micro and macro applications of the production function, what is really of interest is of course, employed human capital (H) and capital (K), not just a generic labor stock L. Output is produced, income is earned and input prices are set based on the quality of the experience, training and schooling embodied in labor (its skill set), not just based on the magnitude of the labor stock L. Denison, 1967 and Denison, 1974 was among the first to make this adjustment in empirical specifications of the production function and Dagum (1978) was among the first to note this in work on the functional income distribution. Thus, the production function should be specified as, equation(1b) Q=F(H,K) The purpose of our study is to quantify human capital H and to examine its size distribution empirically. By doing so, a better understanding of the relationship between the functional income distribution and the personal income distribution can be achieved. The theoretical and applied relevance of an integration of these sub-fields becomes obvious when it is observed that the functional income distribution deals with the factor price formation and the allocation of total income among the factors of production. Whereas, the personal income distribution deals with the allocation of total income among the set of families, households or their disaggregation by various retained attributes. Furthermore, the functional income distribution constitutes the primary economic process of income distribution. It is followed by a secondary or derived economic process consisting of the allocation of earned and property incomes to the persons that contributed to the generation of total income with their resources of HC and wealth. This second process leads, in a natural way, to the specification of the microeconomic income generating function (IGF) advanced in Dagum, 1978, Dagum, 1980 and Dagum, 1994. In symbols, equation(2) View the MathML source where y stands for personal income, h for the stock of HC, and k for the stock of wealth (non-human capital), corresponding to the economic units which are the object of inquiry. The IGF plays a fundamental role in the analysis and linking of the functional and personal income distribution, the integration of the micro and the macroeconomic processes concerning the generation and distribution of income, and in providing the basic analytical knowledge for the design of policies regarding growth and development. For further consideration on the IGF and its role to deal with the linking of the functional and personal income distribution, see Dagum, 1994 and Dagum, 1999. This fundamental topic will not be discussed in this study because it falls outside the purpose of this research. The processes considered above give a special role to investment in HC and in a socioeconomic infrastructure aimed at a more equitable income and wealth distribution, with less poverty and with the elimination of social exclusion. For these reasons, and since h is a latent variable, we have to have information about k and a selected set of indicators to arrive at a robust estimation of the personal or size distribution of h. The most important sources of information towards this end are the sample surveys of income and wealth distribution data. Given all these considerations, the purpose of this research is, (i) to identify a set of indicators to be used to estimate the HC of a set of economic units such as households, families and members of the labor force, applying statistical methods to estimate latent variables, using Wold (1982) method and the contributions advanced by other authors to deal with qualitative and quantitative indicators (these methods standardize the latent variables and indicators, i.e. they are transformed into variables with zero mean and unit variance); (ii) to propose a transformation to pass from the dimensionless estimation of HC to an estimation in monetary units; and (iii) to propose a method of estimating the average HC of the population as an object of inquiry to be used as a scalar (benchmarking) to arrive at the final estimation of the HC distribution. This new approach for estimating amount and distribution of HC is presented in Section 4. First, Section 2 offers a brief historical review of the concepts and the measurement of HC including a brief discussion of the Mincer–Becker earnings function. Section 3 presents the main approaches introduced for the estimation of HC. Section 5 presents an assessment of the methods considered in 3 and 4. Section 6 applies the new method proposed in Section 4 to the estimation of HC in 1983 U.S. households, making use of the 1983 U.S. Federal Reserve Board (FRB) sample survey of household income and wealth. Hence, we estimate the average household HC by age of the household head and the average household HC for the population of households. The size distribution of HC in dollars is found using the Dagum, 1977, Dagum, 1983 and Dagum, 1996 model, which exhibits an excellent goodness of fit. Section 7 concludes our study.

The method of HC estimation proposed in this study makes a fruitful combination of the latent variable methods of estimation and the prospective method developed by Farr (1853). The issue of obtaining accurate estimates of the expected flow of earned incomes by age is solved when working with sample surveys of income and wealth distributions, i.e. because of their large sizes, the law of large numbers applies. Our HC estimation is compared with the best known HC estimates done in the last quarter of the 20th century, i.e. those obtained, for the US by Jorgenson and Fraumeni (1989) and by Kendrick (1976), and for Canada, by Macklem (1997). According to our recollection, it is the first time that the size distribution and model estimation of HC is done working with a sample survey of income and wealth distribution, thus enlarging the frontier of income and wealth research. This research is integrated with a thorough study of the two classical (prospective and retrospective) methods of HC estimation, including an analysis of the educational stock approach and the Chicago School’s contributions. Basic contributions to the field of endogenous growth theory that incorporate the concept of HC were done by Romer, 1986 and Lucas, 1988. Dagum, 1978 and Dagum, 1980 introduced the IGF model as a function of HC and wealth; Dagum (1994) specified an IGF model as an equation in a causal model of income, HC, and wealth determination; and in Dagum, 1998 and Dagum, 1999 it became a basic equation to link the functional and the personal income distributions, and to support the design of socioeconomic policies of growth with social equity. Besides, the proposed method of estimating the HC and its distribution among a population of economic units can be highly relevant to make further advances in the development of endogenous growth theory. The method developed and applied in this research and the statistical information provided by the consumer finances and the employment and unemployment sample surveys, hopefully enlarged with some additional questions, can be fruitfully applied to estimate the human capital of the members of the labor force, to investigate its HC structure and distribution, to analyze the amount of idle HC, the unemployment rate of the labor force, and the main types of unemployed HC. These themes should be essential parts of any future socioeconomic research program of growth and development.