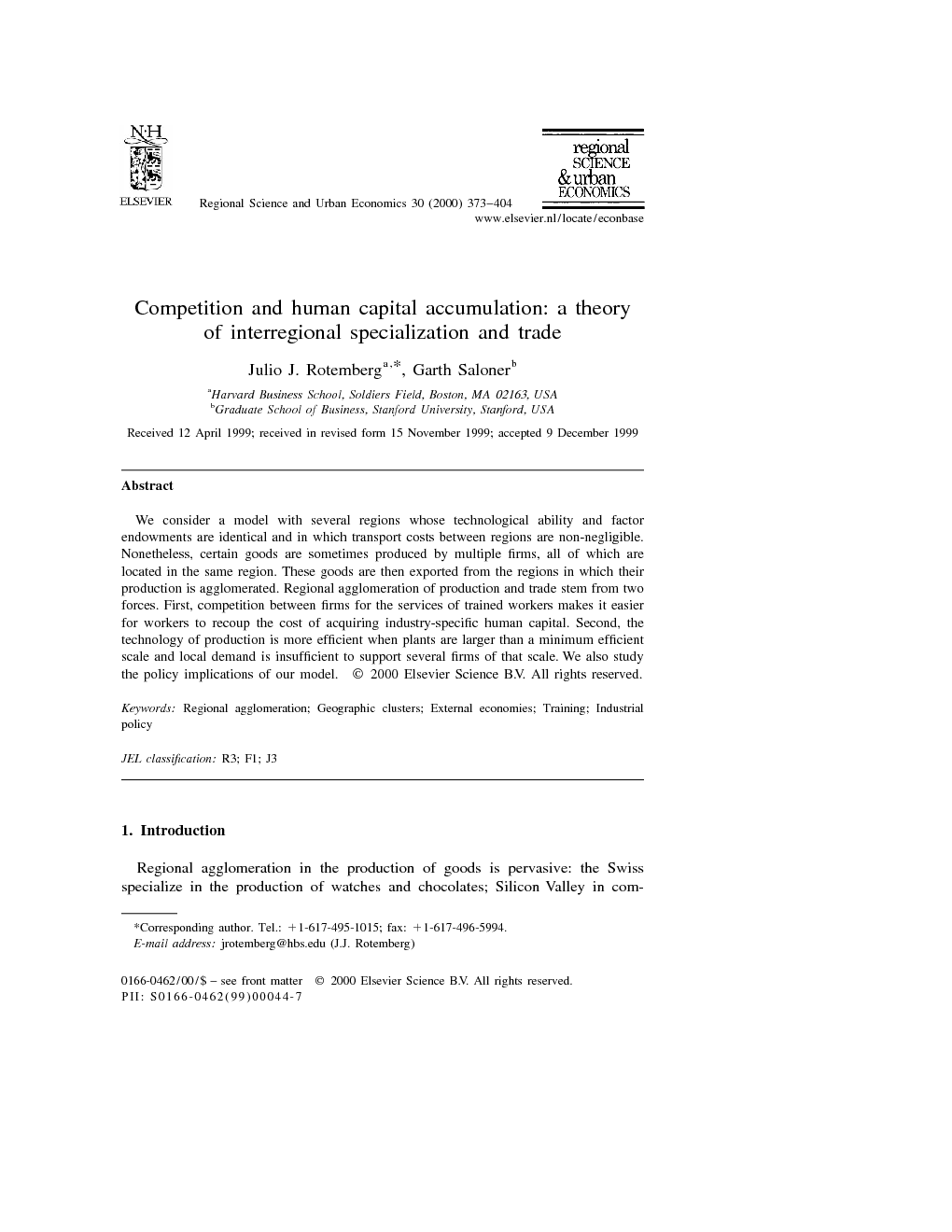 We consider a model with several regions whose technological ability and factor endowments are identical and in which transport costs between regions are non-negligible. Nonetheless, certain goods are sometimes produced by multiple firms, all of which are located in the same region. These goods are then exported from the regions in which their production is agglomerated. Regional agglomeration of production and trade stem from two forces. First, competition between firms for the services of trained workers makes it easier for workers to recoup the cost of acquiring industry-specific human capital. Second, the technology of production is more efficient when plants are larger than a minimum efficient scale and local demand is insufficient to support several firms of that scale. We also study the policy implications of our model.

We have presented a model of regional agglomeration in the production of specific goods where the principal motor behind a region’s exports is the healthy competition among many suppliers located there. Competition ensures that workers earn high wages if they acquire industry-specific human capital which, in turn, makes human capital accumulation attractive and the industry viable. The main message from the model is that even where it is technologically possible to obtain the same allocation with trade as without trade, trade serves a useful role. It allows industries to operate on a sufficiently large scale that it is possible to have several firms producing the same goods in one location and thereby reap the benefits that flow from regional agglomeration. While we have focused on the salutary effect of regional agglomeration on the abuse of monopsony power, there may be other reasons why regional agglomeration enhances human capital accumulation. That is, it is an open question whether the mechanism by which having several local firms creates an incentive for human capital accumulation is through the increased competition they generate. For example, a different advantage of regional agglomeration may be that it provides some assurance to workers that they will remain employable in the industry if conditions change in the future. That is, workers may prefer it if there is a diverse range of activities in the area that use their industry specific skills in case demand conditions or production techniques change in a way that eliminates the activity the are initially employed in. This preference for diversity might exist even if long-term contracts could be written in such a way that the monopsony inefficiency we have analyzed does not arise. Consider just three specific examples. Workers employed in the production of mid-sized automobiles may want to be located near plants that produce small automobiles in case demand shifts in the direction of the latter. Or workers employed producing computers based on a proprietary operating system, but whose skills are not specific to that operating system, may prefer it if plants producing computers based on alternative operating systems are located nearby in case theirs becomes obsolete. Finally, workers could simply be concerned with the possibility that they might not get along with their supervisor or co-workers. They would then like to know that if, if this were to occur, they could easily shift to another job. While the existence of such diversity may be important to workers making their training decisions, it is not clear why it cannot be achieved within a single enterprise. That is, one firm could encompass a range of technologies, products, plants, and divisions. Multiple firms might have an advantage if workers are concerned about the possibility of bankruptcy and if two firms somehow have a combined probability of bankruptcy that is lower than those firms would have when rolled into one. Conceivably, workers might like to have access to a diversity of ‘corporate cultures’ and this might be difficult to achieve in separate divisions of a single company. Another open area for research is the extent to which competition is actually associated with high wages, extensive industry specific training and exports. One problem is that, in practice, it is hard to gauge when an industry is relatively competitive. Nonetheless it is worth providing some anecdotal examples which appear to support the model. First, centrally planned economies have little actual competition for workers between the various firms and are notorious for their inability to export high wage goods. Second, consider the automobile industry. Japan, the most successful exporter of high quality mass-produced cars, has a relatively large number of firms in this industry. Similarly, Italy has several producers of high performance cars which are very successful exporters. In contrast, Italy has only one large mass-production auto manufacturer, FIAT, whose exports to the US are minimal. Interpreted within the context of our model, the high performance Italian cars and the mass-produced Japanese cars can be thought of as high quality goods which use relatively skilled workers while FIAT can be thought of as a lower quality producer who employs less skilled workers. These anecdotes suggest that a more careful exploration of the empirical validity of the model is warranted.