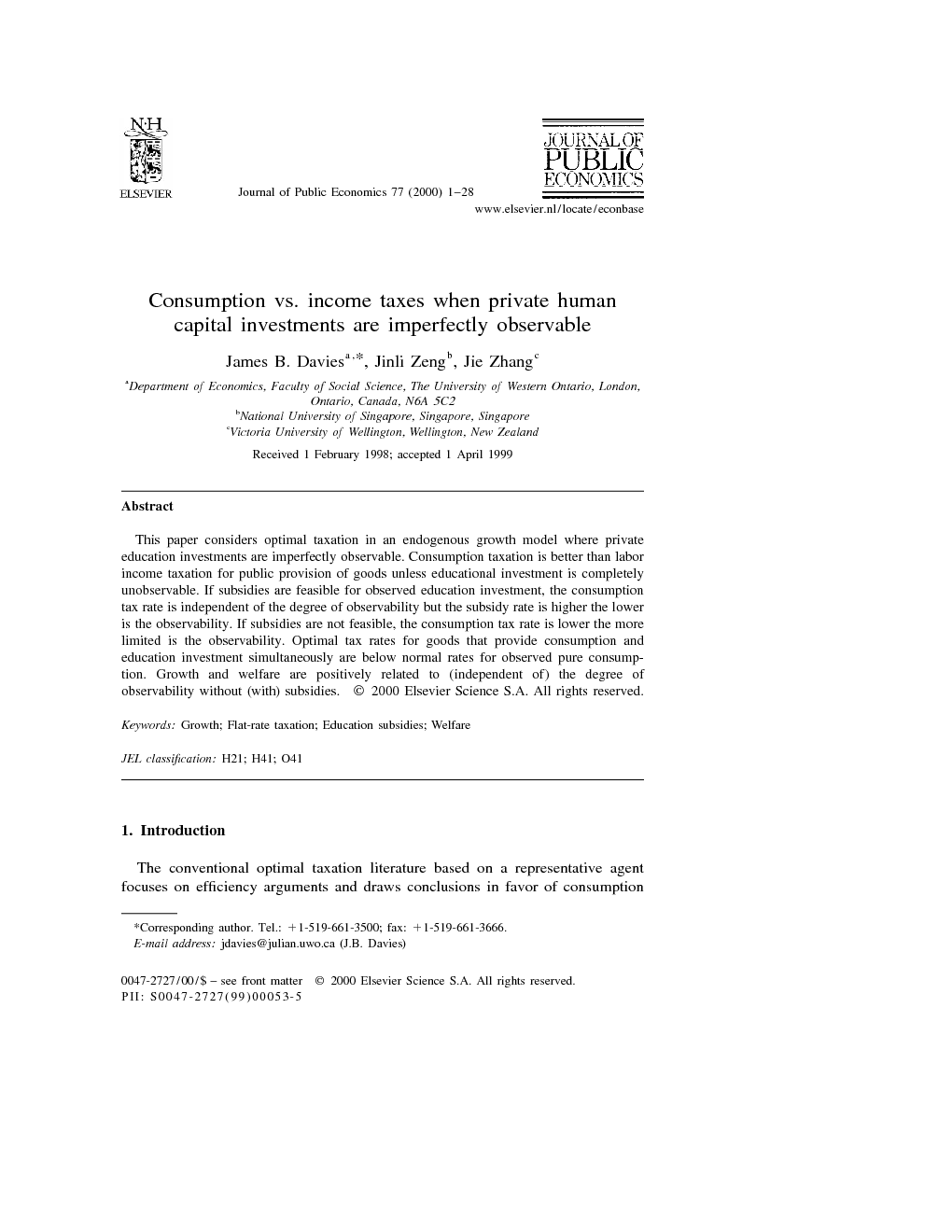 This paper has investigated optimal taxation in an endogenous growth model where governments can only distinguish partially between private human capital investment and private consumption. We have shown that optimal taxation for public provision of goods and services depends on the government’s ability to distinguish private human capital investment from private consumption. The government should use only the consumption tax instrument as long as some fraction of private investment in education can be identified. The latter should ideally be subsidized. If subsidies are not feasible, the lower is the government’s identifying ability, the lower is the optimal consumption tax rate. With subsidies, the optimal consumption tax rate is independent of the degree of observability but the subsidy rate is higher the lower is the government’s observability. If the government is totally unable to identify the uses of private goods, then it can use either the consumption tax, or the labor income tax, or any mix of them. Optimal tax rates for goods with mixed benefits of consumption and human capital investment, and for fully indistinguishable pure consumption and investment are positive but below normal rates for observed pure consumption. It can also be shown that without subsidies, the growth rate and welfare are positively related to the government’s identifying ability, through numerical solutions with general values for this ability as well as analytical solutions with special values for this ability. With subsidies, the growth rate and welfare are independent of the degree of the observability if there is no additional cost associated with the provision of subsidies. These results may have some policy implications. Due to governments’ partial knowledge about actual uses of private goods, the advantages of consumption taxes over labor income taxes are smaller than those suggested in the literature. In practice, the provision of subsidies to observed educational investment involves some additional administrative costs. If these costs are small, subsidizing observed educational investment may be the best option. When such costs are substantial, exemption of observed educational investment from tax may do better although its gain tends to be smaller the more limited is the observability. In either case with or without subsidies, replacing income taxes with consumption taxes will yield smaller gains than the proposed ones in previous work. Finally, in the real world there may be good reasons for the exemptions or lower consumption tax rates often observed on goods and services which may contribute to human capital investment as well as consumption. The gains of switching from income to consumption taxation may fall further in a model that includes physical capital. As pointed out by a referee, replacing income taxes with consumption taxes will increase the tax rates required to raise a given amount of tax revenue because the tax base becomes smaller, especially when physical capital income taxes are considered as well. If the government is sufficiently poor at identifying investment in human capital and if administrative costs of subsidies are too great, net taxation of inputs into human capital may therefore rise when income taxation is replaced by consumption taxation in models with observed investment in physical capital. This suggests the possibility that a move from a comprehensive income tax to consumption taxes may generate very small welfare gains or even welfare losses. Investigation of this issue would be a good area for future research. In a model like ours, without non-human capital, the traditional contrast between an income tax which distorts saving, and a consumption tax which is neutral in that regard, does not apply. This naturally tends to produce more favorable growth and welfare effects under an income tax than when non-human capital is included. But while we abstract from this traditional contrast, we also bring in that between the distortionary impact of an income tax on investment in human capital vs. the less distortionary impact of a consumption tax. Recent literature has stressed the general importance of human capital and its specific role in the growth process. Our results should therefore be of interest even though they abstract from the form of income tax distortion which was formerly considered to be of central interest.