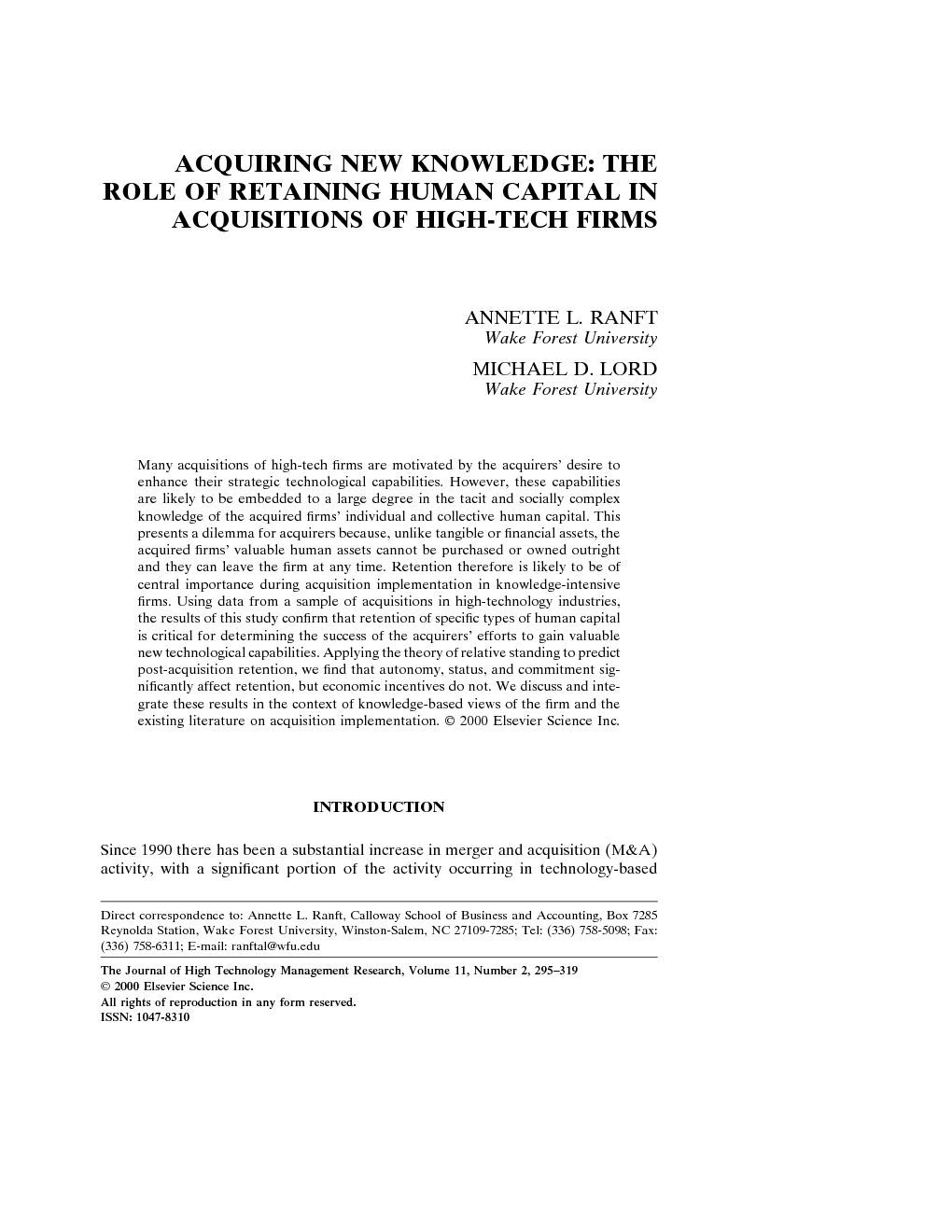 Many acquisitions of high-tech firms are motivated by the acquirers' desire to enhance their strategic technological capabilities. However, these capabilities are likely to be embedded to a large degree in the tacit and socially complex knowledge of the acquired firms' individual and collective human capital. This presents a dilemma for acquirers because, unlike tangible or financial assets, the acquired firms' valuable human assets cannot be purchased or owned outright and they can leave the firm at any time. Retention therefore is likely to be of central importance during acquisition implementation in knowledge-intensive firms. Using data from a sample of acquisitions in high-technology industries, the results of this study confirm that retention of specific types of human capital is critical for determining the success of the acquirers' efforts to gain valuable new technological capabilities. Applying the theory of relative standing to predict post-acquisition retention, we find that autonomy, status, and commitment significantly affect retention, but economic incentives do not. We discuss and integrate these results in the context of knowledge-based views of the firm and the existing literature on acquisition implementation.

Since 1990 there has been a substantial increase in merger and acquisition (M&A) activity, with a significant portion of the activity occurring in technology-based industries. More than 11,000 M&A deals were completed in 1997, for example, valued at over $900 billion. These results indicate a 47% increase over the number of mergers and acquisitions occurring in 1996 (Aley & Siegel, 1998). The overall level of M&A activity has continued to increase notably in subsequent years. Acquisitions in computer hardware and software, electronics, telecommunications, biotechnology, and pharmaceuticals dominate much of this activity. These industries frequently place among the top 10 most active merger and acquisition industries in the Securities Data Corporation's annual merger and acquisition almanacs. Many of the acquisitions in the 1990s appeared to be motivated by firms' need to obtain critical technologies or capabilities. In contrast to acquisitions used to achieve economies of scale, gains in market share, or geographical expansion, many acquisitions are attempting to obtain highly developed technical expertise and skills of employees, high-functioning teams for product development or other functions, or specific new technologies in fast-paced industries Kozin & Young 1994 and Wysocki 1997. Acquiring firms may not have the ability to develop these valuable knowledge-based resources internally or, alternately, internal development may take too long or be too costly. As an example, one of the most aggressive acquirers in the 1990s was Cisco Systems, Inc. Between 1994 and 1997, Cisco acquired over 30 technology companies: … mostly small software outfits, with 50–100 employees, just on the brink of launching commercial products. Cisco is buying new product teams on the open market because it takes too long to assemble them from the ground up. And it is paying lofty prices—sometimes as much as $2 million an employee … [According to CEO John Chambers] It's the critical mass—bringing in the team of people in a different area of expertise than we have today (Wysocki, 1997). According to Chambers, Cisco makes acquisitions both to obtain critical technologies and to retain the services of the best-skilled knowledge workers, including hard to find engineers and programmers. In these high-tech acquisitions, some of the acquiring firms “couldn't care less about product lines, plants, equipment, or real estate,” assets which have traditionally been the focus of many other types of acquisitions (Wysocki, 1997). The academic literature highlights that many acquisitions do not succeed in achieving their desired objectives and instead result in poor organizational and financial outcomes. Problems with post-acquisition implementation are among the primary reasons given for this disappointing record. Acquisition implementation problems often arise because of clashes of organizational cultures, systems, or strategies and because of the loss of key executives in the acquired firm. In the academic literature, researchers have focused on the causes and consequences of top management team turnover in an acquired firm Hambrick & Cannella 1993, Krug & Hegarty 1997, Very et al. 1997, Walsh 1988, Walsh 1989 and Walsh & Ellwood 1991. The departure of an acquired firm's top managers, and the consequent loss of their knowledge and skills, is thought to be one important determinant of poor post-acquisition performance (Cannella & Hambrick, 1993). This study builds from a knowledge-based view of the firm to investigate the causes and consequences of employee turnover throughout the acquired organization, and the impact of this turnover on the newly combined firm's knowledge-based resources. As illustrated by John Chamber's comments regarding Cisco's acquisition strategy, key employees—both individually and collectively—embody an acquired firm's intellectual capital and are the repository of much of its technological capabilities. Many of these employees are not top managers, but instead are located at different levels and in different functions or locations throughout the firm Badaracco 1991 and Nonaka 1994. Because the acquisition of key employees' valuable knowledge and skills may be a primary motivation for the acquisition in the first place, their departure makes the success of the acquisition much more difficult and much less likely. The existing acquisitions literature offers limited understanding of the antecedents and consequences of retaining key employees throughout an acquired firm, however, because of a predominant focus on the “upper echelons” of the organization. Empirical research to date has primarily focused on turnover in the top management team of the acquisition target Cannella & Hambrick 1993, Hambrick & Cannella 1993, Very et al. 1997, Walsh 1988, Walsh 1989 and Walsh & Ellwood 1991. In contrast, knowledge-based views of the firm argue for the importance of employees elsewhere in the organization—those who possess critical individual expertise and skills or those who in combination possess valuable team- or group-based capabilities—who may be critical for determining the overall success of the acquisition. Integrating perspectives from the acquisitions and knowledge literatures, this study empirically explores the determinants and the effects of retaining key employees on the transfer of an acquired high-tech firm's knowledge-based resources, specifically its valued technologies and capabilities, to the acquirer.