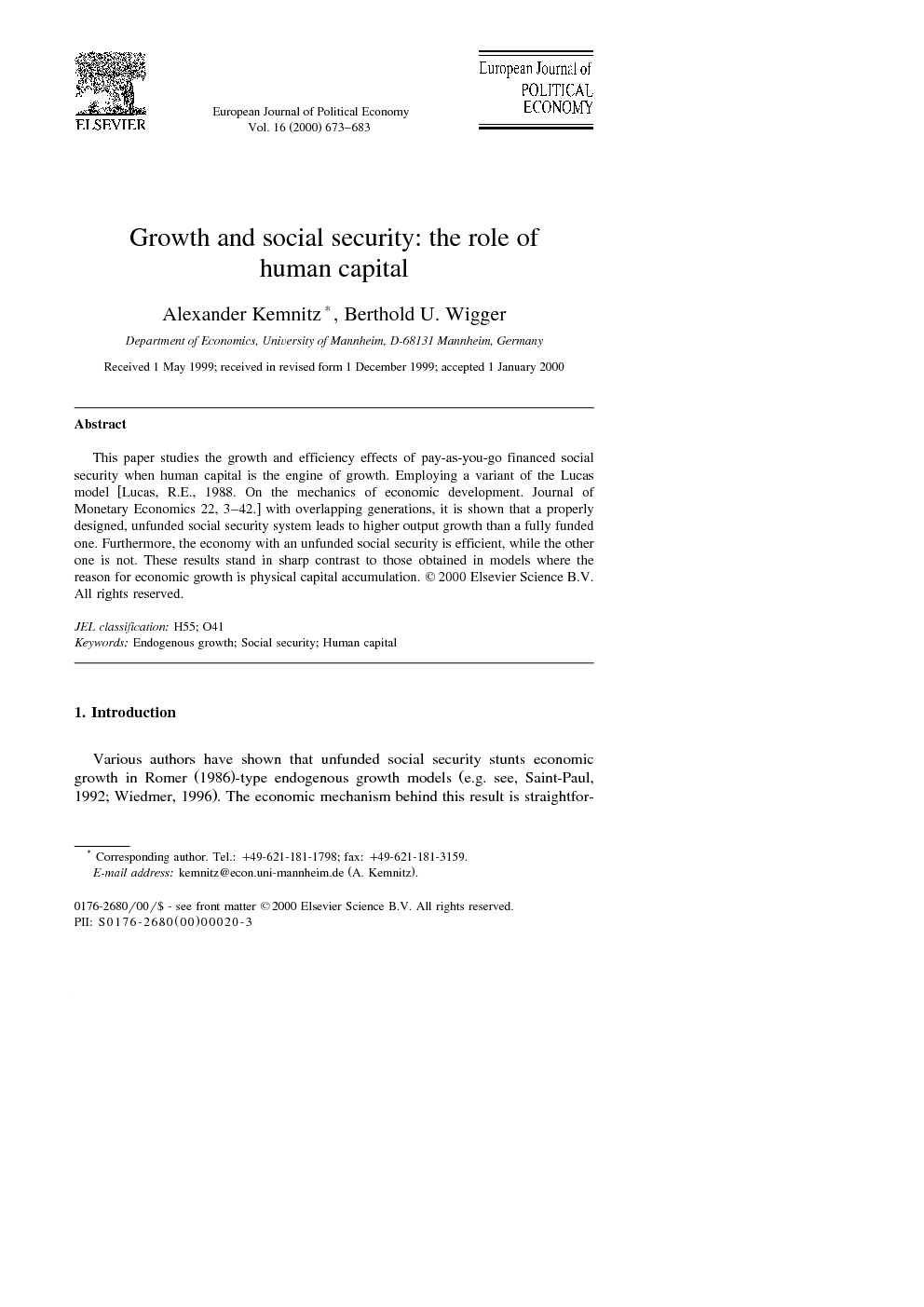 This paper studies the growth and efficiency effects of pay-as-you-go financed social security when human capital is the engine of growth. Employing a variant of the Lucas model [Lucas, R.E., 1988. On the mechanics of economic development. Journal of Monetary Economics 22, 3–42.] with overlapping generations, it is shown that a properly designed, unfunded social security system leads to higher output growth than a fully funded one. Furthermore, the economy with an unfunded social security is efficient, while the other one is not. These results stand in sharp contrast to those obtained in models where the reason for economic growth is physical capital accumulation.

We have shown that the connection between social security, economic growth and efficiency may take on a different or even a reverse form than that suggested by the recent literature if human, rather than physical capital accumulation is the engine of growth. In our model, a higher growth rate can be attained by employing a properly designed unfunded social security system which internalizes intergenerational spillovers of human capital formation. Furthermore, this internalization leads to an efficient allocation, while a laissez-faire economy generally fails to achieve efficiency. Although we have carried out our analysis in a model that sustains long-run growth, our (in-)efficiency conclusion would also hold in models that are more in the neoclassical tradition, provided that there is some human capital transmitted from generation to generation. Only if every generation were to “reinvent the wheel”, would the type of intergenerational externalities we investigate here, not exist. A positive effect of unfunded social security on human capital investment has also been derived by Sinn (1998). His approach differs from ours in some important respects. First, Sinn's case for social security rests on an intrafamily moral hazard problem, namely that children, once they are educated, may refuse to compensate their parents for educational investments. This induces parents to invest too little in their childrens human capital. This effect can be mitigated by unfunded pensions, which give parents a stake in their successors working income.9 In our model, however, individuals underinvest in their own human capital because they neglect the positive side effects of their educational investment, unless they are compensated by a proper pension rule. Second, Sinn (1998) investigates a pension scheme where individual benefits are independent of the human capital investment in one's offspring. He shows that such a system may enhance welfare, but never leads to an efficient allocation. We, instead, derive a pension scheme that restores efficiency by conditioning individual pension benefits on the studying time chosen. And third, Sinn's model is static and is not concerned with the growth implications of social security, as we are. It is not our aim to advocate unfunded social security as such. Rather, we provide a counterexample to the existing literature in order to point to a possibly positive feature of real world pension schemes. The relevance of this feature depends, among other things, on the effect that human capital and its intergenerational transmission has on economic development relative to physical capital. Our paper demonstrates that as long as this is an unresolved issue, general statements regarding the impact of social security on economic efficiency and per capita income growth should be made with caution.