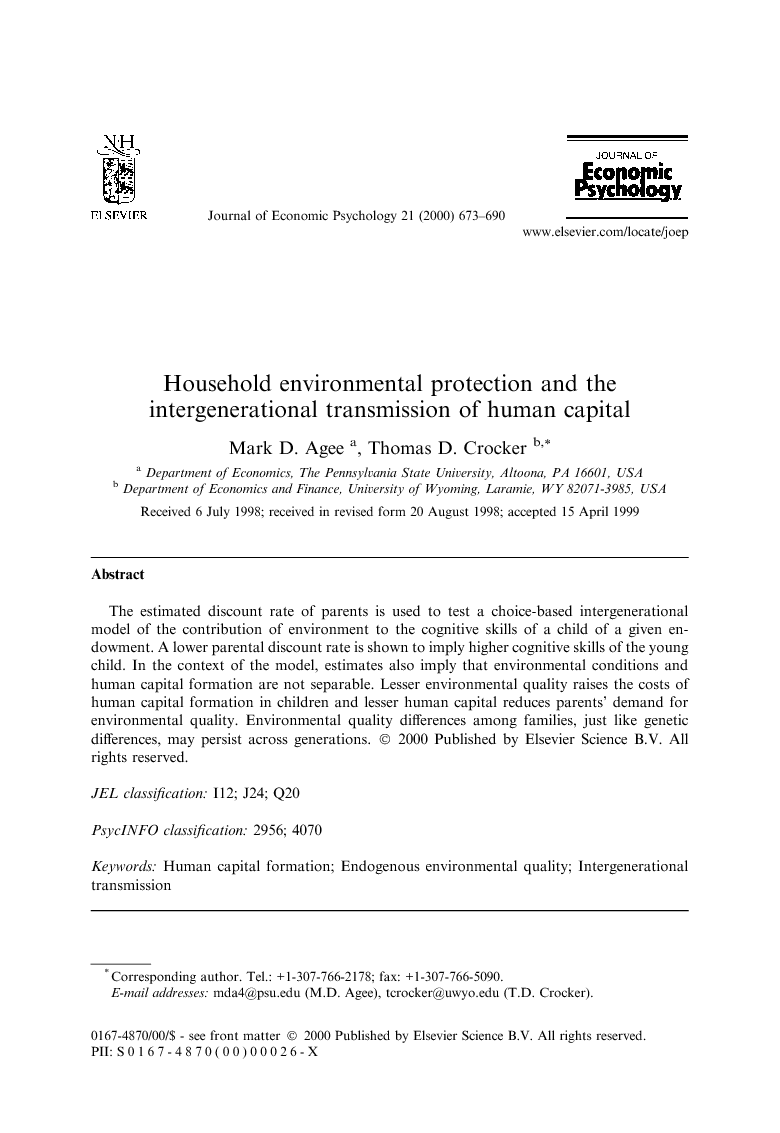 The influence of human capital or knowledge about the laws of nature and the nature of man on economic growth and the evolution of income inequality receives increasing attention in both the technical economic literature, e.g., Levy and Murnane (1992), and in popular commentary, e.g., Murray (1984). Human capital is thought to be the primary engine of growth, the major component of wealth in developed economies, to be increased by and to increase the scope of markets, and to play significant roles in fertility choice, socialization, and migration. Little attention has been given, however, to how human capital can affect one's treatment of the natural environment, or how this environment can mold one's accumulation and protection of human capital. Central to any attempt to deal with either of these questions is the extent to which intergenerational redistributions, especially from adults to young children, are influential. Since children do not vote and have only trivial assets or activities over which they can exercise substantial discretion, the practical aspects of the intergenerational redistribution issue revolve around the productivity of parental and social investments in environments that can affect a child's prospective human capital. Given that parents have limited resources, they must often make time and effort choices between their immediate consumption and the provision of environmental enhancements and protections that will advance a child's current health and adult prospects. When approaching adulthood, the child takes what its parents, community, and genes have handed it and sets its course for an adult life. This study uses an unusual data set to estimate the relationship between the environmental protections that parents offer children and the intergenerational transmission of human capital. We focus on lead, a persistent micropollutant that has become ubiquitous in even remote environments, and which is widely acknowledged in the biomedical literature to produce long-term cognitive skill deficits in young children who are exposed to everyday ambient concentrations common to the world's urban areas (Smith, Grant, & Sors, 1989). Following Agee and Crocker (1998), the next section presents a simple model in which changes in parents' demand for own-consumption translate into changes in the environmental quality they provide their children, and hence into changes in the benefits to them of building their children's human capital. The model hinges upon parents having imperfect access to capital markets in that they must either sell assets, increase parental market labor, or reduce household consumption to finance investments in their children which cannot be borrowed and made the children's future obligations. A third section describes the data we employ, while the fourth section presents empirical tests of model propositions. The connection we find between parents' own-consumption and their children's cognitive skills and their home environment leads us to conclude that environmental quality differences among families, just like genetic differences, may persist across generations.

This paper qualitatively demonstrates that the discount rates that a set of American parents applied to own-investments in their young children's adult prospects influenced those children's cognitive skills. Construction and interpretation of the estimates is guided by an intergenerational utility maximization framework in which the development of cognitive skills is dependent in part upon the specific environment in which the skills are nurtured. Lower discount rates imply that parents make greater investments in improving their children's environments. Improved environments enhance the children's cognitive skills. The policy implications are plain: a high parental discount rate applied to environmental investments in children today implies that these children when adults will apply a high discount rate tomorrow, in the absence of some compensating activity. Given that higher cognitive skills lead directly to better adult prospects and indirectly to better prospects through increased learning and additional years of schooling, reduced parental incentives to nurture the cognitive skills of their children perpetuate lesser cognitive skills through the generations. Environmental differences among families, just like genetic differences, may persist across generations. Some caveats are in order. First, if the parents' net rate of return to nonchild (financial) investments were positively related to their earnings and education, our findings would be confounded by a price effect masquerading as a wealth effect. Second, the durability of the effects we have identified cannot be determined from our data. We do not allow differences in families' fertility decisions to appropriate the cognitive skills effects of the differences in their discount rates. Finally, the major limitation in our approach is that we cannot control for variations in cognitive skills that are not reflected in the IQ test scores we use as indicators of these skills.