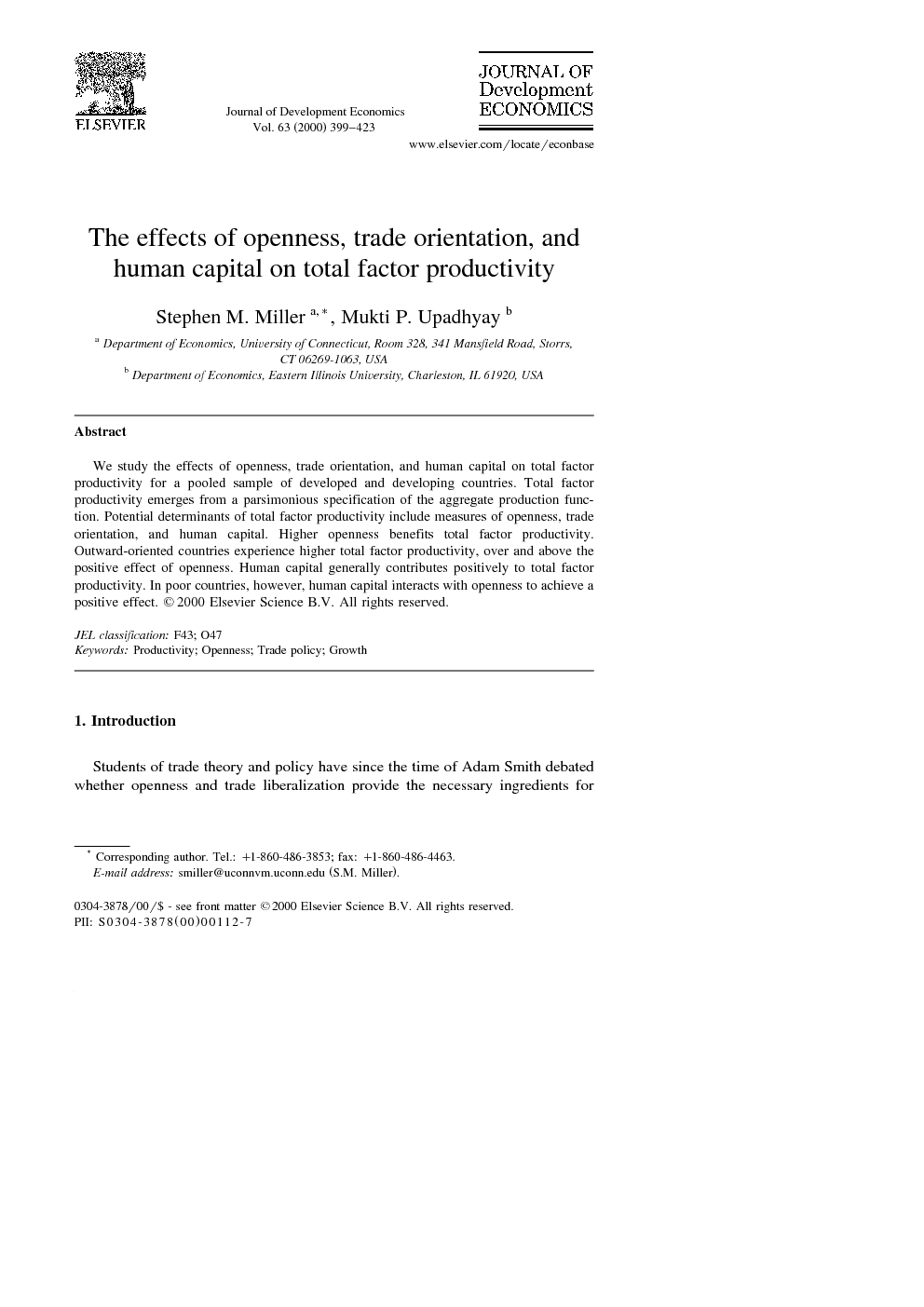 Students of trade theory and policy have since the time of Adam Smith debated whether openness and trade liberalization provide the necessary ingredients for economic growth. Edwards (1993) describes the ebb and flow of this debate during the latter half of the twentieth century. Various protectionist theories captured the major attention of trade policy makers after World War II. During the last two decades, however, a growing body of empirical evidence has legitimized the role of market-oriented reforms and trade liberalization. Now, the International Monetary Fund and the World Bank make market-oriented reforms and trade liberalization a condition for financial aid. The effect of openness and trade liberalization on economic growth remains a highly contentious issue, however.1 Trade and exchange rate regimes interact with other economic and non-economic factors to affect changes in real per capita income.2 Larger trade implies greater openness that facilitates the economy's adoption of more efficient techniques of production, leading to faster growth of total factor productivity and, hence, real per capita income.3 The expansion of exports relaxes the foreign exchange constraint and allows for larger imports of key inputs in the production process. Finally, improvements in the terms of trade can exogenously increase output. The empirical tests of the effects of openness and trade orientation on economic growth (e.g., Dollar, 1992, Sachs and Warner, 1995 and Edwards, 1998) typically employ cross-section analysis. Edwards (1993) argues that “A more precise answer to this general question (how openness and trade orientation affect output growth) would require more detailed analysis relying, at least in part, on time series data, …” (p. 1385, parentheses added) and to examining, among other things, “… the robustness of specific results …” (p. 1390). We employ pooled cross-section, time-series data with robustness analysis to improve the likelihood of uncovering important links between openness and trade orientation and total factor productivity.4 The reemergence of the importance of growth theory has also refocused much of the debate toward how public policy can affect economic growth. The standard neo-classical growth models [i.e., the Solow (1956) model, Ramsey's (1928) optimal growth model, or Samuelson's (1958) overlapping generations model, and their descendants] have been challenged by the literature on endogenous growth. The neo-classical paradigm considers technological change as an exogenous process whereas the endogenous growth literature makes this process endogenous, looking for possible driving forces. Mankiw (1995) recently discusses three practical empirical problems associated with the neo-classical approach along with a proposed solution — the model cannot explain the observed differences in real income per capita across countries, the observed rate of convergence across countries, or the observed differences in real rates of return across countries. He modifies one parameter, the returns to capital, by defining capital to include both physical and human capital, and argues that this one change goes a long way toward allowing the neo-classical model to explain these three empirical regularities. and Economists, at least since Solow (1957), explain output growth by the accumulation of factor inputs and of the growth of total factor productivity. The growth accounting regressions commonly search for additional determinants of growth beyond the basic factors of production. In effect, these studies treat all determinants of output growth as inputs. That approach may be conceptually inaccurate, since many included determinants may only indirectly affect output. Rather, these determinants affect the efficiency of the real inputs, physical capital, labor, and possibly human capital. Consequently, these additional determinants of output growth directly affect total factor productivity. Our analysis involves two steps. First, we calculate two total factor productivity measures from production function specifications that exclude and include human capital as an input. Second, we search for significant determinants of total factor productivity, especially measures of openness and trade orientation.7 While the existing literature has identified total factor productivity to be large and significant, much less work searches for the determinants of total factor productivity. We add some depth to this latter discussion. We can state our basic findings simply. First, a country's openness, as measured by the ratio of exports to gross domestic product (GDP), has a significant and robust positive effect on total factor productivity.8 Second, outward orientation, as measured by deviations from purchasing power parity (PPP), lead to a significant and robust negative effect on total factor productivity.9 Finally, human capital has a significant effect on output when it is included as a factor of production. The inclusion of human capital in the production function lowers the elasticity of output with respect to labor when compared to the production function without human capital. The elasticity of output with respect to physical capital remains essentially unaltered by the introduction of human capital as an input. Further, human capital positively affects total factor productivity in many, but not all, specifications. Finally, for low-income countries, human capital possesses a negative effect on total factor productivity until openness exceeds a threshold, where the effect turns positive. Our paper progresses as follows. In the next section, we estimate parsimonious production functions and determine the levels of total factor productivity under two specifications — one with and one without the stock of human capital as an input. We consider the importance and robustness of various determinants of total factor productivity in Section 3. Finally, we conclude in Section 4.