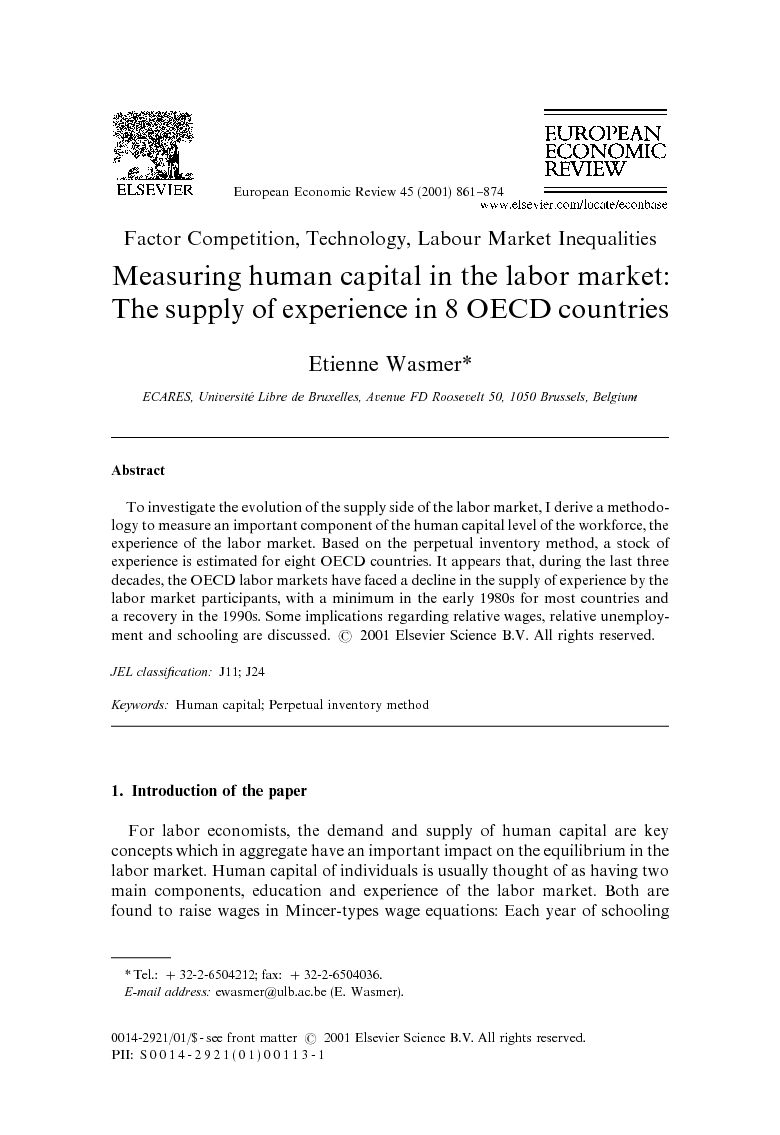 To investigate the evolution of the supply side of the labor market, I derive a methodology to measure an important component of the human capital level of the workforce, the experience of the labor market. Based on the perpetual inventory method, a stock of experience is estimated for eight OECD countries. It appears that, during the last three decades, the OECD labor markets have faced a decline in the supply of experience by the labor market participants, with a minimum in the early 1980s for most countries and a recovery in the 1990s. Some implications regarding relative wages, relative unemployment and schooling are discussed.

For labor economists, the demand and supply of human capital are key concepts which in aggregate have an important impact on the equilibrium in the labor market. Human capital of individuals is usually thought of as having two main components, education and experience of the labor market. Both are found to raise wages in Mincer-types wage equations: Each year of schooling raises earnings by several percents while a proxy for experience, generally age or age minus education, captures almost as much variance as the level of education. For instance, the 20 first years of experience are associated with an average yearly increase in hourly wages by about 3% for American workers.1 The necessity to resort to using proxies in these regressions is unfortunately due to limitations of surveys where the history of individuals is usually not known. Can we improve our understanding of the aggregate labor markets by better measuring the latter component of human capital? The objective of this paper is to provide a methodology to measure the levels and evolution of aggregate measures of human capital accumulated through labor market experience across different countries. An indicator of ‘experience supply’ is built using macroeconomic data on labor market participation. This indicator measures the aggregate experience of the labor market. The idea is simple: I apply a routine inspired from perpetual inventory method usually devoted to the estimation of stocks of physical capital using flows of investments. In this paper, experience of the labor market is similarly seen as a stock of past history of labor market participation. This method is applied to eight OECD countries over the past decades. The evolution of the experience of the labor market is a priori the sum of several labor supply changes. The first and most important is probably the baby-boom. Age pyramids (not reported here, available in a technical appendix available on request) in the US show a very distinctive peak in the size of the cohorts due to the abnormally large fertility in the 1950s. This peak has the shape of a triangle that has a translated over time: The first wave of this peak entered the labor market in the early 1970s, had a maximum intensity in the mid 1970s, and then declined. The population of these large cohorts then became older over time which will affect the age composition of the labor force. Equivalent graphs for different countries in Europe, notably France, Germany, Spain and Sweden exhibit the same imbalance across generations, particularly marked in the case of Spain where the share of youngsters is very large. However, the age composition of the population in Europe changed differently from the US: First, these changes had a different timing, since the baby-boomers arrived later at the working age, around 1980; second, they were less concentrated in time.2 In all countries, these variations in the age structure coincide in time with other important changes: There have been both a slight decline in male participation (the ratio of the active population to the working-age population), and a large increase in female participation, in all OECD countries. The aggregation of experience of this paper will show that these trends have lead to a decline of the indicator of experience in the 1970s, followed by a rise for most countries in the late 1980s. However, the trends having differed across countries, our indicator will also reveal some differences in the evolution of experience, notably between Spain and the other countries: In Spain, the rise in experience had not yet started in the mid 1990s. This paper is organized as follows: The methodology is briefly discussed in Section 2. Section 3 describes some other work on micro data, which confirms for France and the US the time series evolution of aggregate experience. In Section 4, I explore some implications of the time variation in experience on relative wages, relative unemployment and schooling.

Recent papers by Bloom and Canning (1999), Lindh and Malmberg (1999) and others include the population shares in usual growth, convergence or inflation macroeconometric models. Interestingly, this tends to improve the fits of the regressions. The intriguing possibility that the demographic structure of the population has macroeconomic implications deserves some more attention. In this paper, I have tried to give a structural content to the idea of including population shares in macroeconomic models, by constructing measures of the experience of the labor force. This measure aims at reducing the dimension of the demographic structure to a single dimension that can be given a structural interpretation in terms of skills and human capital. Future research will exploit this measure to understand better the rise in earnings inequality and unemployment. It is important to note that it has also some other important applications, like in the growth accounting exercises.