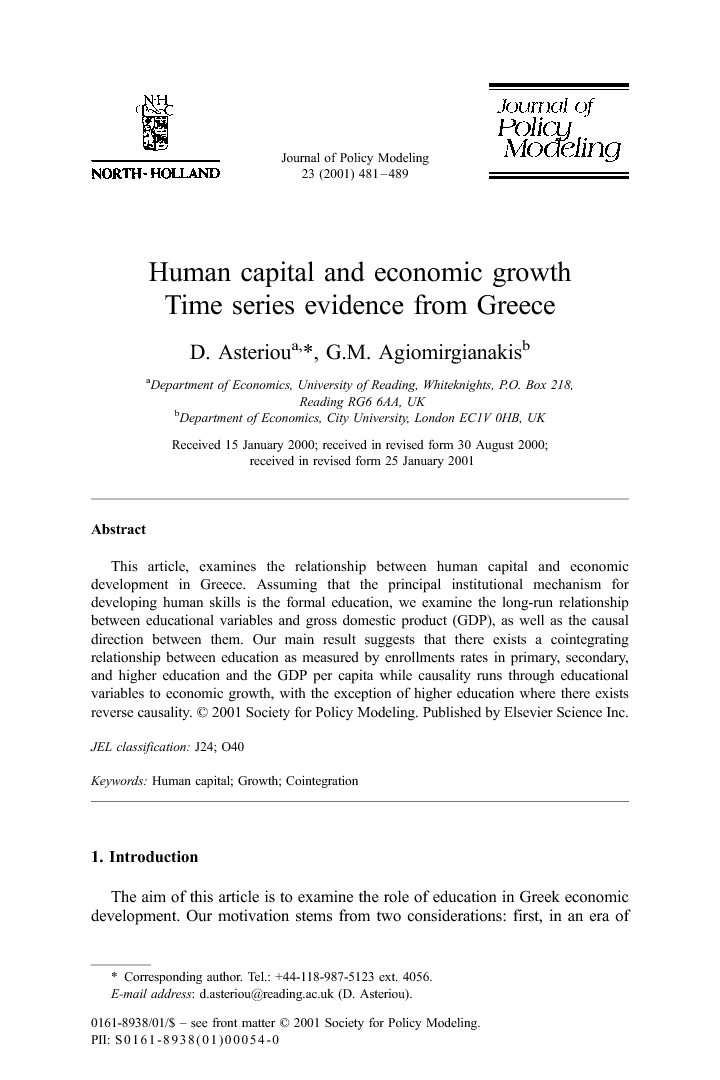 This article, examines the relationship between human capital and economic development in Greece. Assuming that the principal institutional mechanism for developing human skills is the formal education, we examine the long-run relationship between educational variables and gross domestic product (GDP), as well as the causal direction between them. Our main result suggests that there exists a cointegrating relationship between education as measured by enrollments rates in primary, secondary, and higher education and the GDP per capita while causality runs through educational variables to economic growth, with the exception of higher education where there exists reverse causality.

The aim of this article is to examine the role of education in Greek economic development. Our motivation stems from two considerations: first, in an era of increasing globalisation and accelerating worldwide technological advances, shortages in human skills may result in an effective constraint to the economic growth of a modern economy. Second, Greece has recently committed itself to the goal of an expansion of educational opportunities in the higher education.1 Until now, Greece has an equal opportunity system available free to all residents: public financed primary, secondary, and higher education, while entry examinations exist for higher education. This system normally results in an exclusion of a great number of candidates from higher education, each year. Nowadays, however, Greek educational policymakers plan the abolition of the entry examination system that allows free higher education virtually to every candidate. The existing literature on the role of education on economic growth usually employs standard sources-of-growth equations based on a dynamic Cobb–Douglas aggregate production function, which can easily be extended to include human capital as a determinant of the economy's growth rate. One strand of models includes those by Barro (1991), Barro and Lee (1993), and Baumol (1986), which argue that human capital plays an important role as a facilitating factor on the international transfer of technology from innovating countries to “imitating” ones, helping them to “catch-up” with the developed countries. Also, Mankiw, Romer, and Weil (1992) show that an extended Solow-type growth model, when solved for the steady-state per capita income level, ends up in an equation that includes physical and human capital as the basic growth determinants. Alternatively, on the endogenous growth side of models, human capital accumulation has been recognised as one of the most important engines of economic growth. Romer (1990) develops a growth model, assuming that the creation of new ideas/designs is a direct function of the human capital (which has the form of scientific knowledge). Therefore, investment in human capital, by improving research and development, entails a growth in physical capital investment, which in turn results in higher real growth rates. Persistent accumulation of knowledge by human beings, either with intentional efforts (Lucas, 1988) or with learning by doing (Azariades & Drazen, 1990), promotes the productivity of labour and capital, and is the driving force of economic growth (see Kim, 1998). Investment in human capital is generally proxied by educational variables. Indeed, it is widely accepted that the principal institutional mechanism for developing human skills and knowledge is the formal educational system. Most developing countries have been led to believe that the rapid expansion of educational opportunities is the key to their economic and national development. The focus of this article is on the potential impact of an enlarged number of highly educated people to Greek economic growth. More specifically, the hypothesis that we want to test is whether or not this educational expansion (by leaving free the entrance in higher education) could affect Greek economic development. In order to investigate the above hypothesis, the present article adopts a time series based, empirical strategy: cointegration tests are followed by causality tests. Furthermore, the choice of Greece as a case study is based on several considerations: first, Greece is an emerging European economy with a fast growing financial sector, that has controlled inflation and budget deficits and enjoying higher rates of gross domestic product (GDP) growth (3.5% in 1999). Secondly, Greece heads towards participation in the European Monetary Union, a prospect that by many Greek policymakers is expected to contribute to further increases in economic growth. Thirdly, educational qualifications in Greece are considered prerequisites for a successful career either in the public or private sector. The article is organised as follows. In Section 2, we incorporate education into a simple endogenous growth model in a discrete time environment where education is a parental choice variable entering the utility function. In Section 3, we explore the long-run relationship between educational variables (enrollments in elementary, secondary, and higher education, as well as, government expenditure in education) and GDP. Finally, Section 4 contains concluding comments.

In this article, we explore the relationship between economic growth (in terms of GDP growth) and education in Greece. We find that GDP is cointegrated with all educational variables, indicating a positive long-run relationship, while the causal direction runs through educational variables to GDP growth with the exception of higher education where there exists reverse causality. The causal direction from the enrollments in the two first levels of education to economic growth suggests that the larger the number of educated persons, the faster the development. However, the finding that the higher the economic development the more the demand for higher education suggests that the expansion of formal schooling and the acquisition of higher degrees and certificates is not necessarily associated with an improved ability to undertake productive work and hence to foster economic growth. However, the discordance between the theory and data analysis, found for the higher education variables, might be worth investigated further by empirical means. For instance, if technological advances drive modern economic growth, then there might be a causality from certain types of human capital, such as mathematicians, applied scientists and IT experts, and economic growth. In this case, it would be preferable for policymakers to channel funds towards education that provides skills required by sectors like information, communications, and financial services.