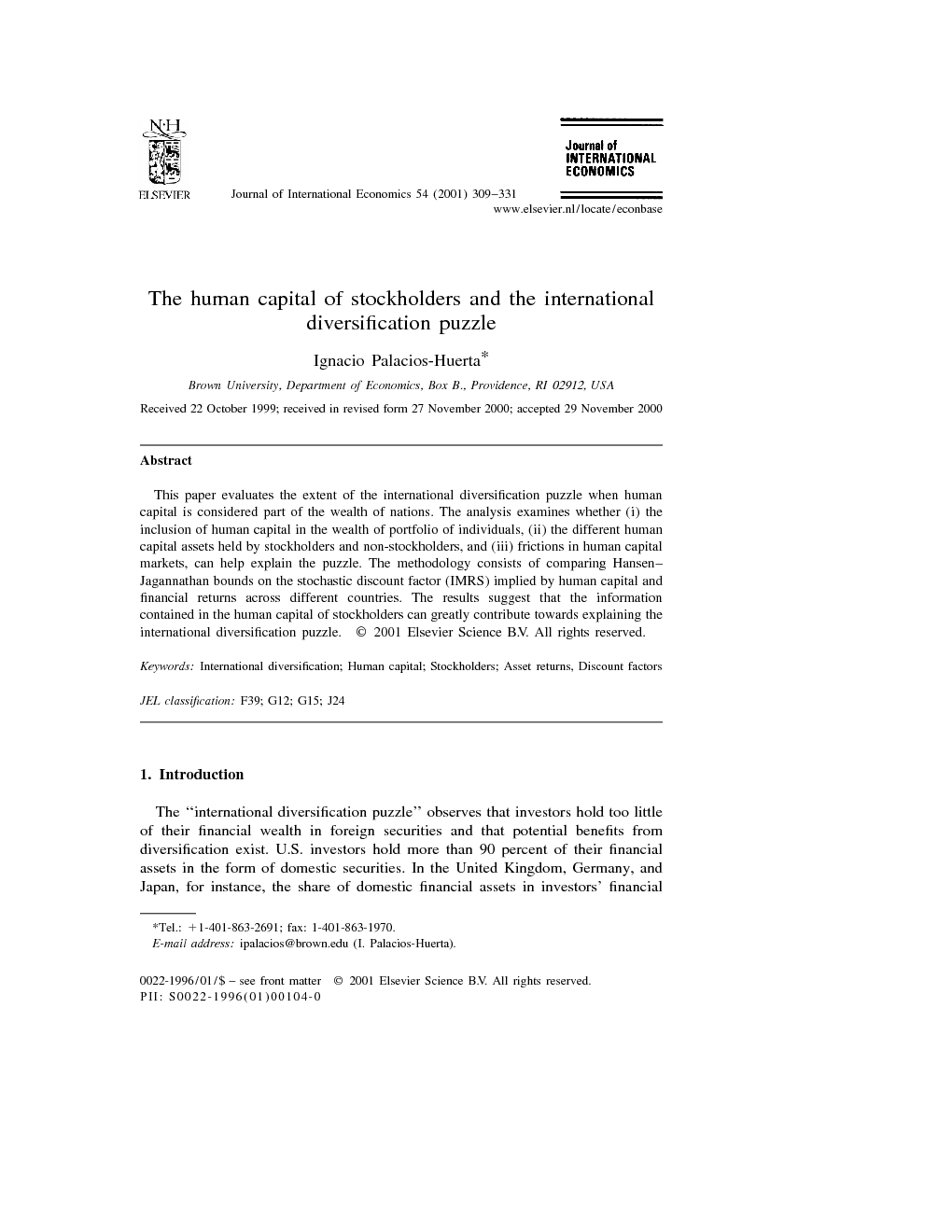 Building upon recent insights in the asset pricing and the international finance literatures the analysis in this paper finds that if human capital is considered part of the wealth of nations, as it must be, gains from international financial diversification for a mean-variance investor appear to be smaller than previously reported and, in some cases, close to negligible. We approached the question of international asset diversification in a novel way by using the methodology proposed by Hansen and Jagannathan (1991). While the use of equity returns, instead of fundamentals-based measures of capital returns, does contribute towards explaining the international diversification puzzle, the key features of the analysis are the use of measures of human capital returns that account for skill premiums and, most importantly, the extent to which the human capital of stockholders is different from that of non-stockholders. The results show that all these aspects are important and indicate that the information contained in the human capital returns of stockholders can greatly contribute towards explaining the international diversification puzzle. The vastly different results obtained for stockholders and non-stockholders also suggest that access to international investments through 401K and similar plans will mostly benefit less educated and less wealthy individuals. The analysis in this paper may be extended in various directions. First, it may be possible to implement it with data on wages and asset holdings for other countries (e.g., the Family Expenditure Survey in the United Kingdom), and other conditioning methodology (e.g., Beckaert and Liu, 1999). Second, as mentioned in the introduction, some human capital risks may also be hedged by life insurance, unemployment insurance, medical insurance, marriage or other forms of partnerships. Knowing how individuals hedge some human capital risks in these or other ways should prove useful in examining the extent of the puzzle in further detail. Similarly, a close examination of the limitations on the extent to which human capital portfolios may be adjusted both downward (because of irreversibility) and upward at different frequencies deserves careful consideration. Lastly, further disaggregated data of the demographic characteristics of stockholders (e.g., occupation and industry), and of the mix between stocks and other financial assets that they actually hold, will provide valuable information about the covariance structure of risk-return differentials of human and financial assets for this and other asset pricing puzzles. Data currently available, however, may not be detailed enough to implement this idea anytime soon. In conclusion, the roles of human capital, market segmentation, and heterogeneity in the international diversification puzzle examined in this paper along with the robustness of the patterns of the findings are perhaps best interpreted as one more glimpse of the promise of multidisciplinary inquiry (human capital, labor economics and asset pricing) to meet the challenges and puzzles of modern capital theories.