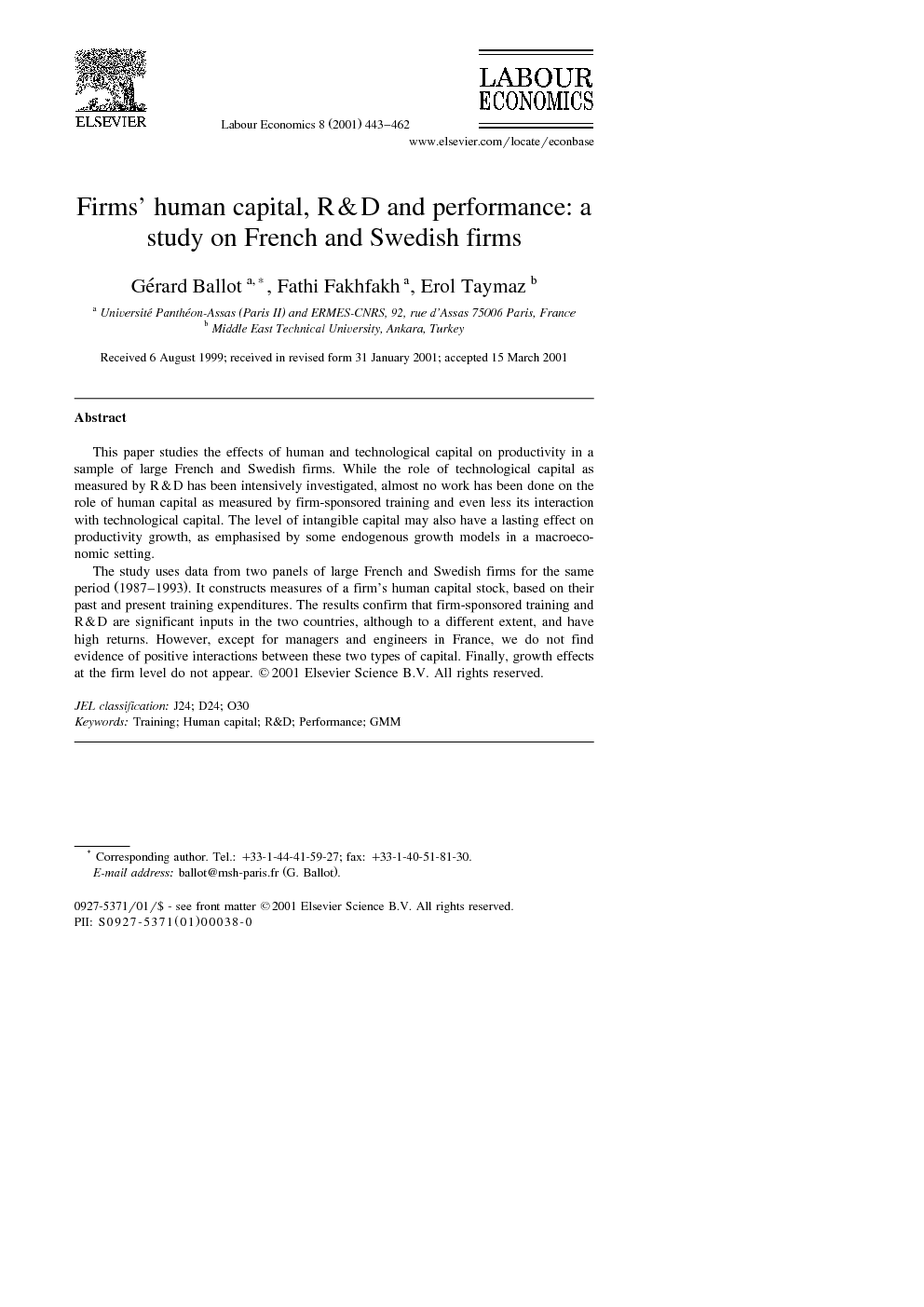 This paper studies the effects of human and technological capital on productivity in a sample of large French and Swedish firms. While the role of technological capital as measured by R&D has been intensively investigated, almost no work has been done on the role of human capital as measured by firm-sponsored training and even less its interaction with technological capital. The level of intangible capital may also have a lasting effect on productivity growth, as emphasised by some endogenous growth models in a macroeconomic setting. The study uses data from two panels of large French and Swedish firms for the same period (1987–1993). It constructs measures of a firm's human capital stock, based on their past and present training expenditures. The results confirm that firm-sponsored training and R&D are significant inputs in the two countries, although to a different extent, and have high returns. However, except for managers and engineers in France, we do not find evidence of positive interactions between these two types of capital. Finally, growth effects at the firm level do not appear.

Why do firms perform differently? Among the least analysed factors, we can point to intangible assets, whose share in total assets is becoming increasingly important. Some estimates for the period 1974–1983 for France mention a rise from 21.2% of total investments to 32.2% (Marion, 1987). Eliasson (1990, p. 81) offers several estimates for Sweden ranging from 14% to 30%. R&D capital and marketing capital are the most frequently cited items, but workers' human capital is also important. The firm is able to augment this capital by hiring educated workers and/or by training its existing workers and conversely, it can reduce it by its separation policy (its attitude towards layoffs, quits, and retirement). It is also responsible for the organisation of the individual workers' human capital and any resulting efficiency. Human capital exercises its effects on the firm's productivity through several mechanisms: (1) an efficiently organised firm with a manager who has substantial human capital will make better decisions than its rivals with lower human capital; (2) innovation will be stimulated by the quality and training of the personnel in the R&D department; (3) learning-by-doing is also higher if workers have high human capital. The neoclassical theoretical literature treats the firm's human capital mainly as an input, which has static effects only. The evolutionary school, based on Schumpeter's hypotheses, is built on the cognitive abilities of workers interacting in organisations and has developed into concepts such as “economic competence” (Eliasson, 1990), or “absorptive capacity” (Cohen and Levinthal, 1990). These concepts can help to explain differences in performance between firms. Several new mechanisms have been proposed. Firms well endowed in human capital have the capacity to imitate other firms and therefore to benefit from relatively cheap spillovers coming from other firms' technological knowledge. These firms also have the ability to undertake the necessary organisational changes. The evolutionary theory suggests also that intangible capital may have dynamic effects. This can be translated into quantitative terms by stating that the human capital stock may generate not only a higher productivity but also a continuous growth of productivity. Thus, differences between firms' human capital stock values may yield differences in performance in terms of future growth, while human capital in the production function should not generate such a difference. The purpose of our study is to present empirical evidence relating to the effects of intangible capital on firms' performance, with an emphasis on firm-sponsored training expenditures. Numerous studies analyse R&D effects on performance, while very few study the effects of training. Our access to data on R&D allows us to deal with the possible interactions between “training” and “technological” capital, an issue which to our knowledge has yet to be analysed at the firm level. Another novelty is to allow training and R&D capital to intervene both as inputs and determinants of total factor productivity growth. Section 2 presents the theoretical scheme and previous work. Section 3 discusses the data, and notably the construction of the training capital measure. Section 4 presents the estimation results. Section 5 offers some conclusions.