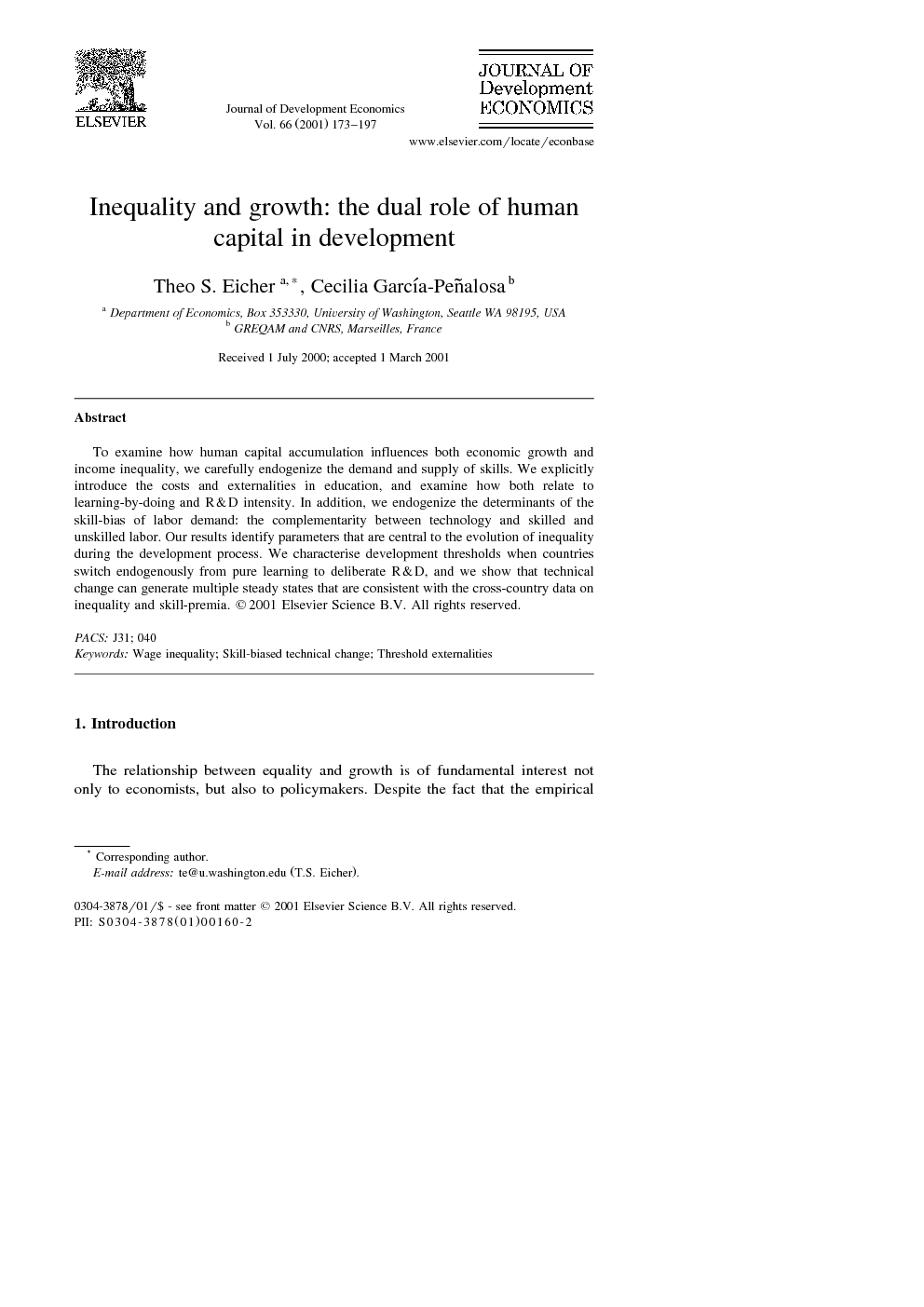 To examine how human capital accumulation influences both economic growth and income inequality, we carefully endogenize the demand and supply of skills. We explicitly introduce the costs and externalities in education, and examine how both relate to learning-by-doing and R&D intensity. In addition, we endogenize the determinants of the skill-bias of labor demand: the complementarity between technology and skilled and unskilled labor. Our results identify parameters that are central to the evolution of inequality during the development process. We characterise development thresholds when countries switch endogenously from pure learning to deliberate R&D, and we show that technical change can generate multiple steady states that are consistent with the cross-country data on inequality and skill-premia.

There is no clear empirical regularity that describes the evolution of inequality along the development process, either within or across countries. Recent dual-economy models have provided a possible explanation. Expanding the original Kuznets argument to allow for intra-sectoral inequality, yields the possibility of inequality patterns different from the traditional inverse-U shaped relationship (see Anand and Kanbur, 1993b and Fields, 1993). This paper has presented an alternative mechanism based on the dual role of human capital. We have argued that the stock of educated workers in an economy determines both the degree of income inequality and the rate of growth, and that the parameters of the demand for and the supply of labor are crucial determinants of whether inequality increases or decreases as an economy accumulates human capital. The driving force of the model is a production function where the relative productivity of skilled to unskilled labor changes with the rate of technical change. New technologies are in turn generated by skilled workers, which implies that the relative demand for labor, and hence the skill premium, are not monotonically decreasing in the stock of skills in the economy. When we pair this demand function with a supply of labor function, we find, first, that multiple equilibria are possible, and, second, that as a country accumulates skills, inequality may increase, decrease, or follow a U-shaped path. The trajectory followed by a particular country will depend on the direct cost of education, the extent of externalities in the education process, and the elasticity of substitution between skilled and unskilled workers in production. Of course, we make no claim that this is the only, or even the main, determinant of inequality. We simply believe that it is an important part of the story. This is particularly so, given that the “source” of growth seems to have changed substantially. In the words of Williamson (1991, p. 90) “the mode of accumulation in the nineteenth century appears to have been much more heavily directed towards conventional capital formation, while the mode of accumulation in the twentieth century seems to have been much more heavily directed towards human capital accumulation”.