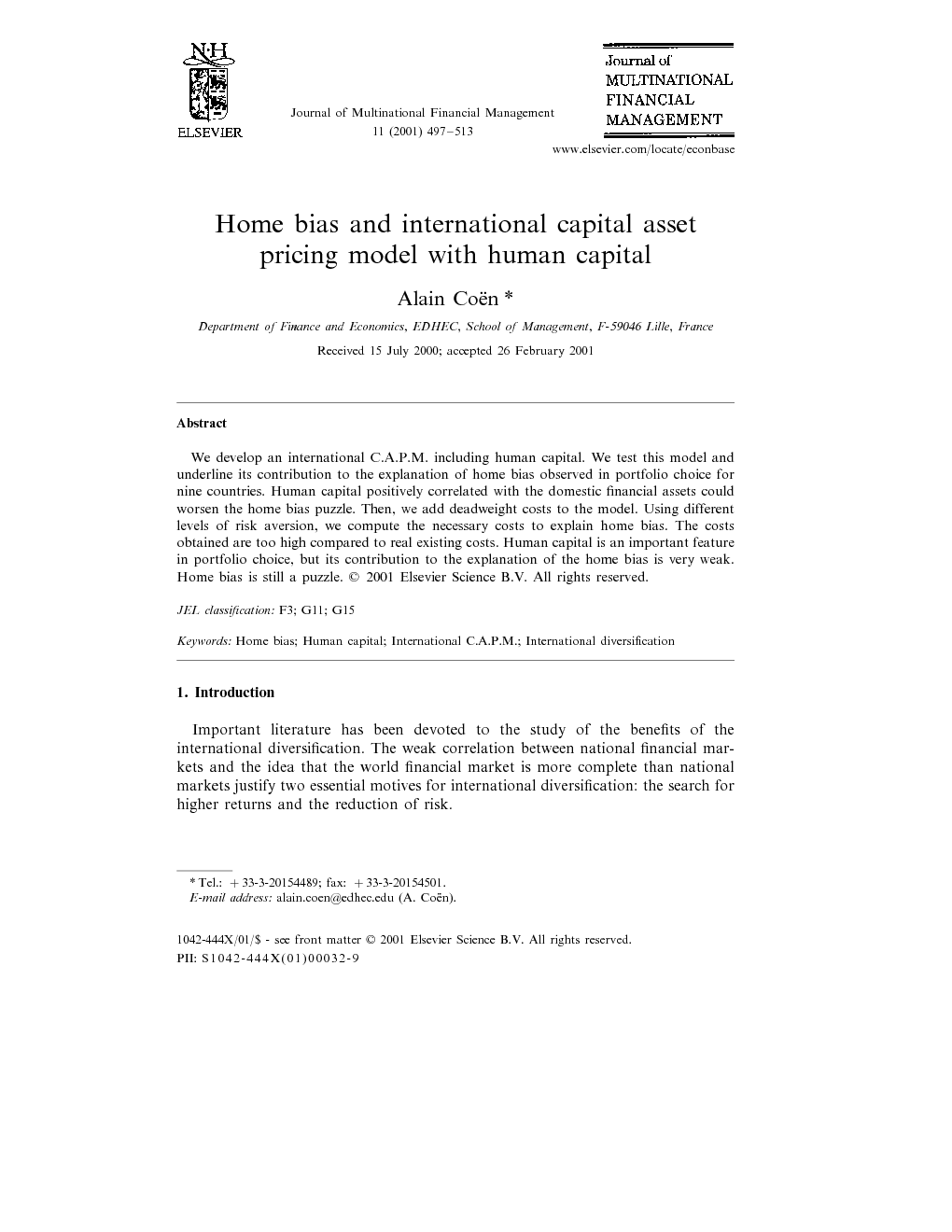 We develop an international C.A.P.M. including human capital. We test this model and underline its contribution to the explanation of home bias observed in portfolio choice for nine countries. Human capital positively correlated with the domestic financial assets could worsen the home bias puzzle. Then, we add deadweight costs to the model. Using different levels of risk aversion, we compute the necessary costs to explain home bias. The costs obtained are too high compared to real existing costs. Human capital is an important feature in portfolio choice, but its contribution to the explanation of the home bias is very weak. Home bias is still a puzzle.

Important literature has been devoted to the study of the benefits of the international diversification. The weak correlation between national financial markets and the idea that the world financial market is more complete than national markets justify two essential motives for international diversification: the search for higher returns and the reduction of risk. The portfolio theory commends international diversification. However, as illustrated by Table 1, the composition of portfolios reveals a strong home bias1. Table 1. Home bias: December 31, 1994a Country Market capitalization (%) Domestic equities (%) Germany 4.2 79.83 Canada 1.83 72.54 Spain 1.14 88.09 USA 40.8 92.21 France 4.08 91.91 Italy 1.65 85.01 Japan 34.04 84 UK 11.2 51.92 Sweden 1.06 100 Total 100 a Portfolio holdings are described in Section 3.2 (data sources). During the 1980s and before 1995, the holdings of foreign financial assets in Sweden were impossible. Data: O.E.C.D. and Financial Times Database. Table options Many explanations have been put forward in the financial literature. Inflation hedging motives2, institutional barriers3, taxes on international investments4 or transaction costs5 are the main explanations to the home bias. But the results of these different studies are very poor and seem unable to explain the home bias observed in the composition of portfolios. Under symmetric information, exchange risk, deviations from the purchasing power parity and restrictions to financial markets, often used to justify the existence of the home bias, have a weak power of explanation (Cooper and Kaplanis (1994)). Some studies consider that gains from a well-diversified international portfolio are very often overestimated6 and do not justify the holding of foreign assets. However, the inefficiency of some small financial markets (Vienna, Helsinki…), international transaction delays or differences in accounting systems could discourage any international diversification (see Uppal, 1993 and Rowland, 1999). In fact, the main explanation of the home bias is certainly related to the investors' perception of the international investment. If they are convinced that they have to pay more to hold a foreign asset, everything else being equal, they tend to prefer to hold more domestic assets. The costs they attribute to international investment are real and assumed (or difficult to observe and to quantify). As we mentioned before, some barriers, taxes or costs, although they become smaller and smaller7, still exist and justify the fear of real costs. But the costs are, above all, assumed: investors attribute a supplementary non-monetary cost, difficult to quantify to the holding of a financial asset they do not know. Heath and Tversky (1991) show that between two identical games, with the same probability, economic agents consider riskier the game they know the less. According to studies in psychological economics, the unknown is riskier8. As mentioned by Solnik (1996): ‘Any unknown is perceived as risky; foreign capital markets are perceived as very risky by investors who are not familiar with them.’ It seems to be easier for a domestic investor to analyze domestic assets. The analyses of balance sheets and financial information published by foreign firms are more difficult (Kang and Stulz, 1997 and Brennan and Cao, 1997). Thus, some studies suggest the existence of informational costs9. Recently, Gehrig (1993) introduced a simple noisy rational expectations model. Even in equilibrium, investors remain incompletely informed. It turns out that foreign assets tend to be riskier even in the absence of any foreign exchange risk for domestic investors, who therefore tend to invest relatively more in domestic assets. As shown by Kang and Stulz (1997) and Brennan and Cao (1997), following Gehrig (1993), asymmetric information plays an important role in risk perception. However, asymmetric information is not the only possible explanation for the home bias puzzle. Eldor et al. (1988) and Stockman and Dellas (1989) show that non-traded assets could explain the home bias (see Lewis, 1999 and Obstfeld and Rogoff, 1996). Baxter et al. (1998) and Baxter and Jermann (1997) consider that the main non-traded asset is human capital. The income related to human capital is wage (labor income). They show that the returns on human capital and the returns on financial capital are very much correlated. To hedge against changes in wage, economic agents should hold domestic financial assets short. In their equilibrium, the home bias puzzle would be worse than the observed composition of portfolios illustrated by Table 1. Bottazzi et al. (1996) and Pesenti and van Wincoop (1996), in two recent studies on the 15 main countries of the O.E.C.D., intend to show that the returns on the human capital and the consumption of non-traded assets should explain the home bias puzzle. Our aim in this paper is to show that human capital is an important feature in international portfolio choice, but like Baxter and Jermann (1997), we think that this non-traded asset is unable to explain the home bias. In the second section of this paper, we develop an international capital asset pricing model with human capital in continuous time and define the optimal portfolio induced. We test the conclusions of the model using a two-step procedure. In the first step, we present the data, and we test whether the hedge against inflation and human capital10 could explain the home bias (Section 3). In the second step, we develop an international capital asset pricing model with deadweight costs. Using this model we estimate the levels of costs required to generate the observed home bias in portfolios consistent with different levels of risk aversion (Section 4). Then, we present our conclusions (Section 5).

Recent studies have underlined the key role of the human capital in asset pricing model and in portfolio holdings16. We have related this non-traded asset to the home bias puzzle. We have developed an international capital asset pricing model with human capital in continuous time. Our aim was to show whether this non-traded asset could give an explanation to the home bias puzzle. We thought this was not the case. Our intuition was based on the positive correlation between labor income and capital income. We have shown that the optimal portfolio is modified and have put forward a theorem. It reveals that each investor holds a combination of three funds at equilibrium: the universal logarithmic portfolio, the personalized hedge portfolio that constitutes the best protection against inflation and the personalized hedge portfolio that constitutes the best protection against changes in labor income. The asset pricing relation shows three premia. The first premium is related to the covariance between the return on asset i and inflation. The second premium is proportional to the covariance between the nominal return on security i and the real return on the investor's portfolio. The third premium is a risk premium proportional to the covariance of the security's nominal rate with the investor's return on human capital (labor income). Then, we have tested whether the human capital and the hedge against inflation could explain the home bias. The results show that the human capital, with wage as a proxy, is far from being the only explanation to this puzzle. In fact, our intuition is confirmed: human capital, with labor income, as a proxy, in an international capital asset pricing model seems unable to explain the home bias. It would be interesting to use other proxies for human capital (age, diploma…) and to use other non-traded assets to explain the home bias observed.