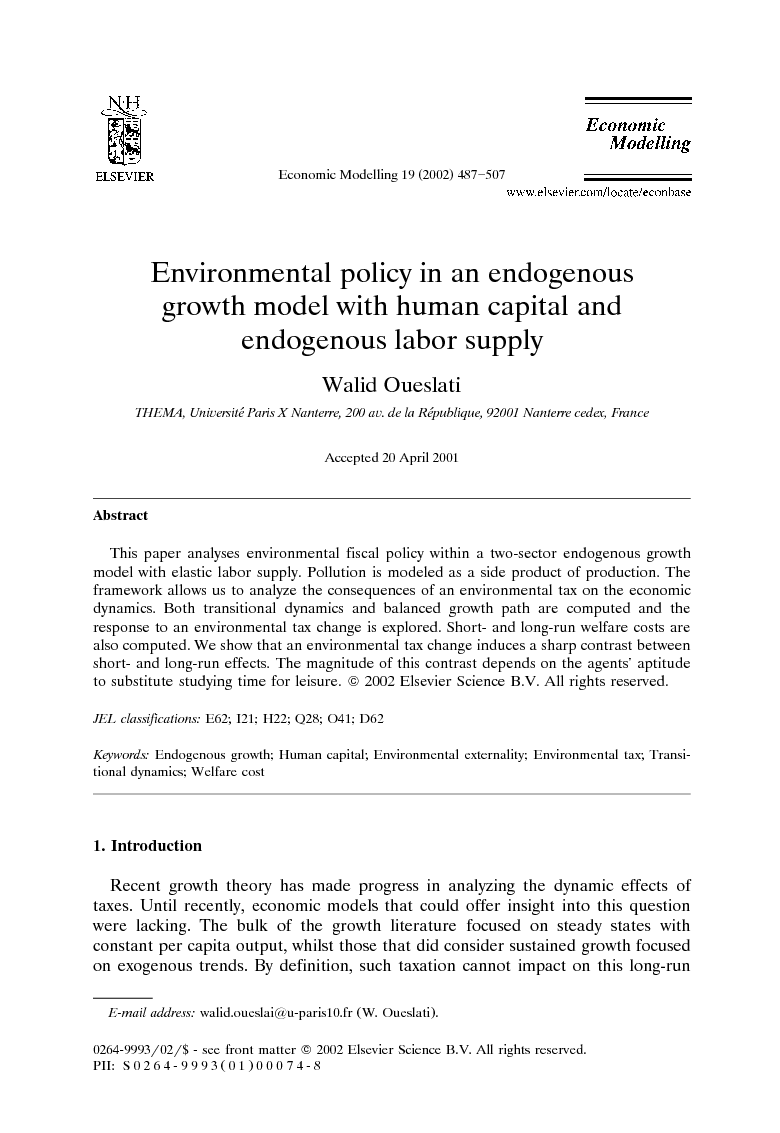 Recent growth theory has made progress in analyzing the dynamic effects of taxes. Until recently, economic models that could offer insight into this question were lacking. The bulk of the growth literature focused on steady states with constant per capita output, whilst those that did consider sustained growth focused on exogenous trends. By definition, such taxation cannot impact on this long-run exogenous growth path. It is only since the development of endogenous growth theory that a tool has existed for investigating how taxation affects growth. These new models explicitly model the processes through which growth is generated and, by doing so, can trace out the effects of taxation upon the underlying individual decisions. Thus, taxation incidences on growth can be rigorously understood and predicted. This is also true for efficient instruments, such as a Pigouvian tax, that internalize environmental externalities. How environmental tax affects economic growth is an ambiguous issue. In the simplest endogenous growth model, the AK model, the growth effect of environmental policy is negative. This is shown by both Gradus and Smulders (1993) for a centrally planned economy with varying pollution weight in the utility function and Ligthart and van der Ploeg (1994) for a decentralized economy. In the literature on endogenous growth with human capital, it is shown that a tighter environmental policy might have a stimulating growth effect. In a Uzawa-Lucas set-up augmented with an explicit treatment of the environment, Gradus and Smulders (1993) find that the optimal growth rate is independent of environmental care. Only by assuming that pollution also negatively affects the efficiency in the human-capital sector did they detect positive growth effects. Bovenberg and Smulders (1995) consider a two-sector model consisting of a consumption/capital good and a research and development sector generating knowledge about pollution-augmenting techniques. Since better environmental quality improves factor productivity in the consumption/good sector, positive growth effects of a tighter environmental policy are possible. In a pure human capital variant of the two-sector Lucas model, van Ewijk and van Wijnbergen (1994) also find positive growth effects of a tighter environmental policy by assuming that pollution negatively affects the production process. Hence, the existing literature can only explain positive growth effects of tighter environmental policy by assuming direct positive productivity effects — positive environmental externalities in production — either in the education or in the consumption/good sector. In contrast with this conclusion, we show in this paper that, in a two-sector endogenous growth model with leisure, a higher environmental tax might affect the long-run growth rate. The reason for this is as follows. Due to an increased environmental tax, firms increase their abatement activities, which reduces final output net of abatement at the expense of households’ consumption. Households substitute education time for leisure time so as to counteract reduced consumption, and this finally boosts growth.1 Whereas most endogenous growth models dealing with environmental concerns restrict the analysis to the steady state, little has been said so far on the short-run effects of taxation. There are a few exceptions in the literature. Ligthart and van der Ploeg (1994) derive the transitional dynamics of linear growth model augmented with a renewable environmental resource. By increasing the disutility parameter of pollution of the representative agent, they find that the fall in the short-run growth rate in the centrally planned economy is bigger than the long-run growth rate. Note that, in this linear framework, the evolution of the environmental stock is responsible for and solely determines the transitional dynamics of the economy. Bovenberg and Smulders (1996) analytically compute the transitional dynamics of a two-sector model consisting of a consumption/capital goods sector and a research and development sector that generates knowledge about pollution-augmenting techniques. The renewable environmental resource acts both as public consumption and as a public input into production, where the latter is identical to a productive environmental spillover. They find that if the environment acts mainly as a consumption good, then a tighter environmental policy reduces growth in both the long- and short-run. But if the environment acts mainly as a public investment good, then long-run growth rises, while short-run growth declines.2 In this paper, we compute the entire dynamic adjustment path towards a balanced growth path. Our analysis of the transition reveals the short-run impact of environmental tax. Furthermore, this analysis of the dynamic adjustment path enables us to perform welfare calculations. In particular, we make explicit the trade-off between the short- and long-run costs of environmental policy. The remainder of the paper is organized as follows. In Section 2 the general model is laid out and both market and central-planner solutions are derived. The optimal environmental tax rate in a first-best setting is analyzed. Section 3 proposes a numerical exercise: we calibrate the model at the steady state, compute the transitional dynamics and comment the short-run dynamics. Section 4 computes short- and long-run welfare costs of taxation. Section 5 summarizes the main findings.

We have studied in this paper the short- and long-run behavior of an economy responding to environmental fiscal policy effects. The model we used is a version of a two-sector endogenous growth model. This model allows us to consider the environmental tax effect on the growth rate according to the preferences’ weight for leisure. Our ambition was to bring further development to results in the literature concerning the transitional effects of an environmental tax. This literature emphasized the effect of an environmental tax on the equilibrium growth rate by showing that pollution affects factors productivity or human capital accumulation. By introducing leisure into the utility function, we have established a link between environmental tax and long-run growth rate without making the above-mentioned assumptions. Furthermore, we have contributed to the short-run dynamic study of such a tax reform. The existing calibration exercises concerning two-sector endogenous growth models inspired us to develop our numerical study. Two steps were necessary to calibrate our model: first, we calculated the environmental tax rate in order to be sure that the pollution abatement in the product (D/Y) is equal to 1.8%. Then, we supposed that, to obtain an optimal level of D/Y, we should double the environmental tax rate. The next step of our work was to simulate and comment on the transitional dynamics associated with an environmental policy change. Along the transitional dynamics, agents face different trade-offs. On the one hand, firms initiate a factorial substitution process that progressively neutralizes the crowding-out effect caused by pollution abatement. On the other hand, households substitute education time for leisure. These effects finally combine into a higher long-run growth rate. Our third and final step was an assessment of the welfare cost induced by variations in the environmental tax rate. We have made a clear difference between the total welfare cost and that associated with the transitional dynamics. Measuring these different welfare costs caused by the environmental tax impact on growth confirms the results found elsewhere in the literature, and emphasizes both the sizable welfare cost in the short-run and the overall welfare benefit in the long-run. The magnitude of the short-term cost is an increasing function of the weights of leisure in utility. If the agents’ labor supply is elastic, an environmental tax increase can stimulate growth, improve welfare in the long run, but causes an important welfare decline in the short run.