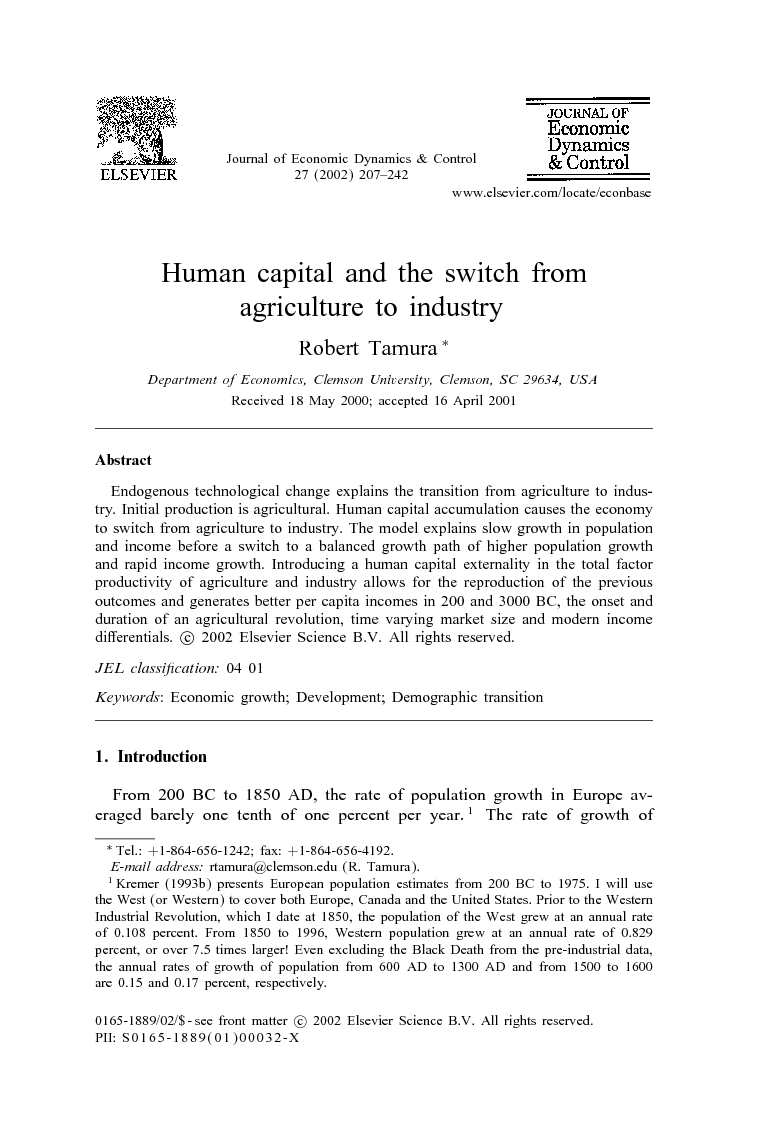 Endogenous technological change explains the transition from agriculture to industry. Initial production is agricultural. Human capital accumulation causes the economy to switch from agriculture to industry. The model explains slow growth in population and income before a switch to a balanced growth path of higher population growth and rapid income growth. Introducing a human capital externality in the total factor productivity of agriculture and industry allows for the reproduction of the previous outcomes and generates better per capita incomes in 200 and 3000 BC, the onset and duration of an agricultural revolution, time varying market size and modern income differentials.

This paper developed a model in which the transition from one mode of production to another, from agriculture to industry, occurs endogenously. The model necessarily abstracted from a number of details, including some addressed explicitly in other frameworks. For example, I ignored the issue of subsistence analyzed in Galor and Weil (2000), nor did I find food production play a special role as it does in Laitner (2000). The paper abstracts from the institutional environment and protection of private property, which Baumol (1990), Bethell (1998), North 1981 and North 1990, Rosenberg and Birdzell (1986), and Parente and Prescott (1999) have argued persuasively plays an important role in development. Finally the paper ignores the role of changing mortality risk examined in Jones (1999) and Tamura (2001). Despite the model's stylized nature, the transitional dynamics were too complex to analyze analytically, necessitating the use of numerical methods. The numerical solutions were reasonably consistent with the population growth experience of the West since 3000 BC, and with the levels of per capita income in 1850 and 1996. A number of additional features arose when the model was extended to include human capital spillovers. In this case, both human capital accumulation and population growth accelerated prior to the departure out of agriculture. 46 The rise in agricultural productivity is an agricultural revolution, corresponding to the transition from hunter-gatherer society to farming. The extended model also better fits per capita income levels in agriculture. A number of extensions are possible. One would be to account for the diffusion of the industrial revolution, as in Lucas (2000). This could be accomplished by incorporating conditional human capital spillovers in the accumulation technology as in Tamura (1996). There would occur just single Industrial Revolution, which could spread through a combination of integration of world markets and imitation.