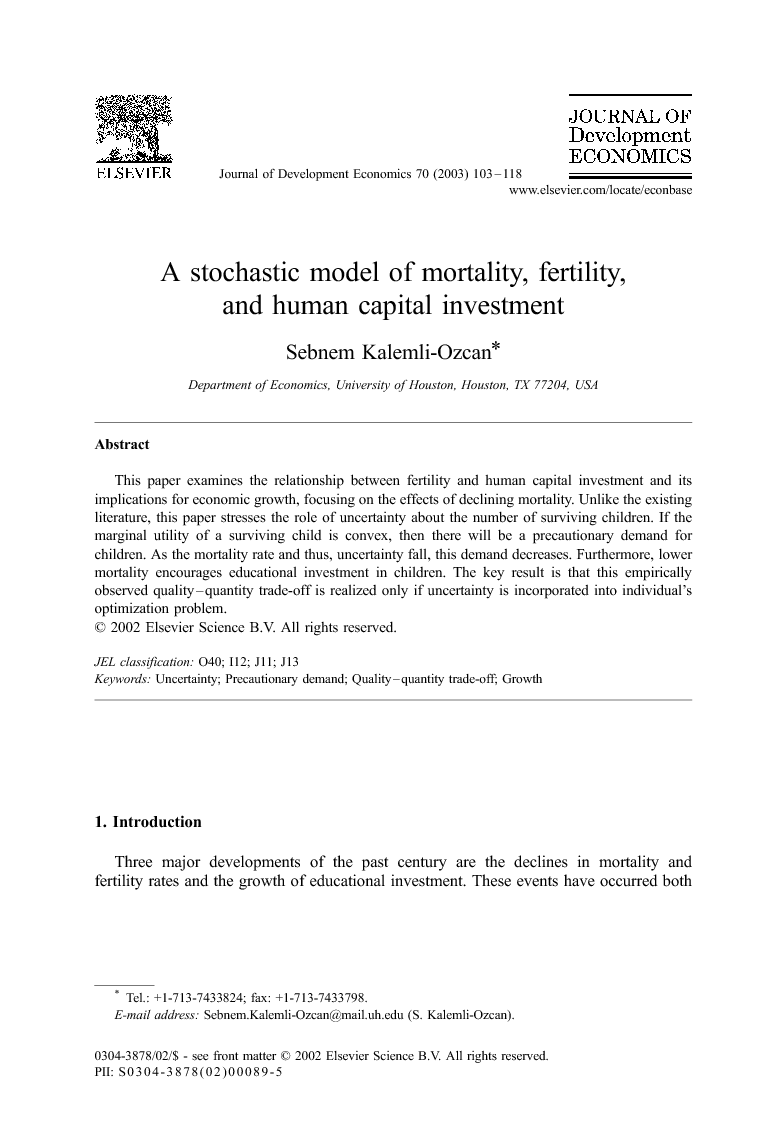 This paper examines the relationship between fertility and human capital investment and its implications for economic growth, focusing on the effects of declining mortality. Unlike the existing literature, this paper stresses the role of uncertainty about the number of surviving children. If the marginal utility of a surviving child is convex, then there will be a precautionary demand for children. As the mortality rate and thus, uncertainty fall, this demand decreases. Furthermore, lower mortality encourages educational investment in children. The key result is that this empirically observed quality–quantity trade-off is realized only if uncertainty is incorporated into individual's optimization problem.

Three major developments of the past century are the declines in mortality and fertility rates and the growth of educational investment. These events have occurred both in the developed countries and in the developing countries.1 The relationship between these three phenomena has nontrivial implications for economic growth. Since increased life span implies a higher rate of return, declining child and youth mortality provides an important incentive to increase investment in the education of each child. Numerous researchers have emphasized that human capital accumulation is the prime engine for economic growth. They have not, however, rigorously investigated this particular mechanism through which increased survival chances promote growth by raising the human capital investment. Historical and contemporary data show that mortality decline preceded the fertility decline in general.2 As a result, countries have experienced a phase of increasing population growth rates followed by a phase of declining rates. This whole phenomenon is known as “demographic transition” and has important implications for the process of economic growth. Lucas (2002) argues that demographic transition and industrial revolution are linked events and what is new about 1800 is not technological change by itself but the fact that fertility increases no longer translated improvements in technology into increases in population. Therefore, understanding the causes of the fertility transition is crucial in terms of past, present, and future economic growth. One explanation of the fertility transition is the reduction in infant and child mortality.3 Previous literature models causality running from mortality to fertility as follows: if households are concerned about the number of surviving children, and if they desire a specific number of survivors, then a reduction in mortality may lead to a corresponding reduction in fertility. While this direct channel accounts for the significant portion of the reduction in fertility, it is an incomplete explanation since it cannot explain the reduction in the “net rate of reproduction” (NRR) and hence, the reduction in the population growth rate.4 Existing models of endogenous fertility, if they allow for mortality at all, do so in the context of certainty.5 High mortality is modeled as reducing the fraction of children who survive to adulthood. Thus, these models ignore the uncertainty about the number of surviving children that is present in a high-mortality environment. Uncertainty has been found to be important in a number of other areas of economics, and this paper illustrates that it is also critical in the context of survival of children. Indeed, it is shown that a model without uncertainty produces results at variance with the data. The model here is built on the effects of mortality decline on the fertility and education decision of parents. If the marginal utility of a surviving child is convex in the number of survivors, then there will be a precautionary demand for children. Thus, parents are prudent in the sense of Kimball (1990). Since parents choose the number of births before they know how many children will survive, in a high mortality environment, they will increase the number of births beyond the number required to produce the desired number of survivors in expectation. As the mortality rate and thus, uncertainty fall, this precautionary demand decreases, and so does the NRR. Second, lower mortality increases a child's expected life span, which encourages investment in the child's human capital. The resources allocated to additional investment in education are freed by the reduction in fertility. Thus, parents find it optimal to move along a quality–quantity frontier, having fewer children and investing more resources in each one. The key result is that this quality–quantity trade-off is realized only if uncertainty is incorporated into individual's optimization problem. As a result, this paper makes two novel contributions. The first is to establish the positive link between increased survival and human capital investment in an endogenous fertility framework. Some of the previous literature found that changes in mortality had no effect on the optimal amount of education. The second contribution is a proposed mechanism under which the relationship between the mortality decline and the fertility decline can be causal. Uncertainty about child survival gives rise to a precautionary demand for children. Thus, exogenous reductions in mortality lead to a decline in fertility and eventually in population growth. These two contributions indicate that relying on the causality from mortality to fertility to explain the fertility transition is not at odds with the view that the fertility decline is due to a quality–quantity trade-off. Increased child survival and the quality–quantity trade-off are complementary explanations, and together they tell a more complete story of the fertility decline. The rest of the paper is structured as follows. Section 2 briefly presents the related literature. Section 3 introduces and solves the model under both certainty and uncertainty. Section 4 discusses the conclusion and extensions.

Empirical studies show that there is a significant positive effect of human capital investment and a negative effect of fertility on economic development. Furthermore, researchers have found a positive correlation between life expectancy (or health proxies) and the rate of economic growth (Barro, 1997). However, there is not any study that provides direct evidence regarding the mechanism through which higher life expectancy promotes growth. Based on these empirical findings, one such mechanism could be mortality decline working through the channels of education and fertility to enhance economic growth. Economic models will miss this point unless the role of uncertainty about the number of surviving children is fully incorporated. This omission is the primary reason that some of the previous literature has found results that are at variance with the data. This paper resolves this inconsistency between theory and the data by incorporating uncertainty into the individual's optimization problem. Here, individuals are prudent in the face of uncertainty about child survival, which causes a precautionary demand for children. As the mortality rate and thus, uncertainty fall, precautionary demand decreases, and hence, parents choose to move along a quality–quantity frontier. In this paper, the survival probability has been assumed exogenous and fixed over time. However, both time-series and cross-sectional empirical studies have found that as income per capita in a country rises, mortality rates tend to fall. Based on this evidence, future research will involve endogenizing the survival probability. This can be done by considering the survival probability to be a concave function of income per capita. Then, this concave relation between the survival probability and income per capita results in a hump-shaped relation between the population growth rate and income per capita, since the population growth rate is a hump-shaped function of the survival probability as shown in this paper. This hump-shaped pattern of the population growth rate as a function of income per capita will have dynamical implications. In a stochastic world, depending on the levels of income and hence, the nature of improvements in mortality, a country can be trapped around a development trap type steady state or can grow forever. One can further include endogenous technological progress. In that case, an exogenous decline in mortality can serve as the basis for a unified growth model that describes the complete transition from an underdeveloped world to the modern growth era.19