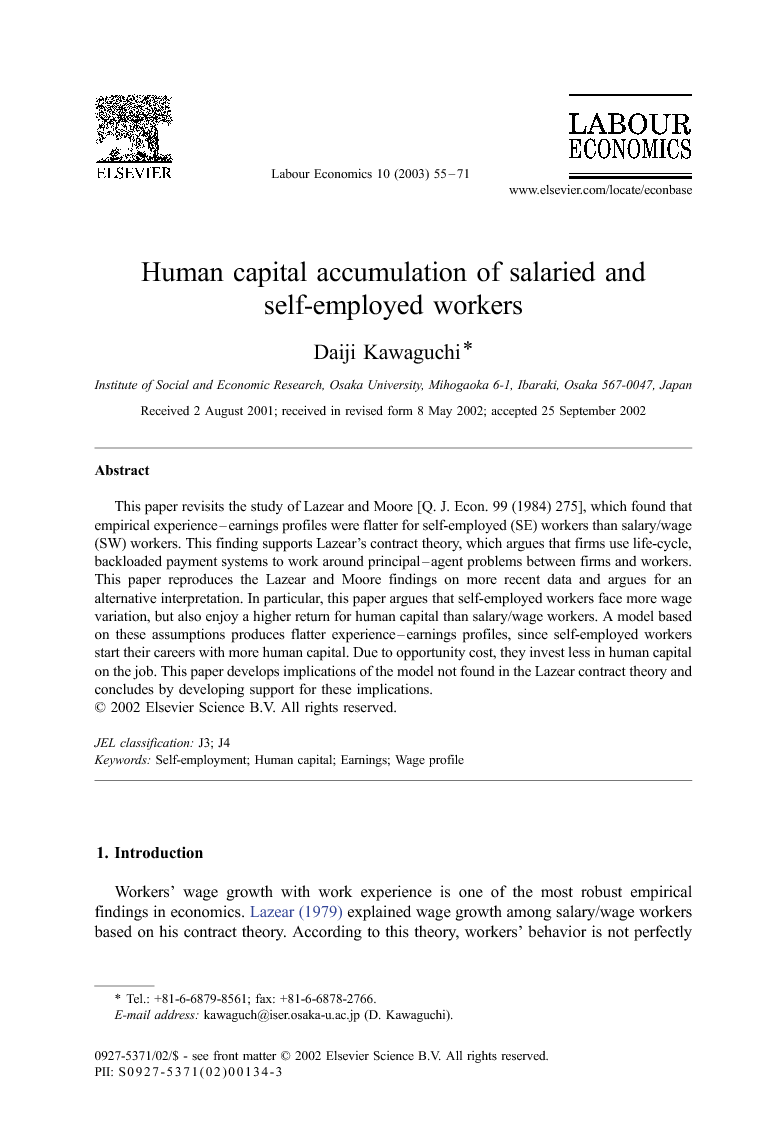 This paper revisits the study of Lazear and Moore [Q. J. Econ. 99 (1984) 275], which found that empirical experience–earnings profiles were flatter for self-employed (SE) workers than salary/wage (SW) workers. This finding supports Lazear's contract theory, which argues that firms use life-cycle, backloaded payment systems to work around principal–agent problems between firms and workers. This paper reproduces the Lazear and Moore findings on more recent data and argues for an alternative interpretation. In particular, this paper argues that self-employed workers face more wage variation, but also enjoy a higher return for human capital than salary/wage workers. A model based on these assumptions produces flatter experience–earnings profiles, since self-employed workers start their careers with more human capital. Due to opportunity cost, they invest less in human capital on the job. This paper develops implications of the model not found in the Lazear contract theory and concludes by developing support for these implications.

Workers' wage growth with work experience is one of the most robust empirical findings in economics. Lazear (1979) explained wage growth among salary/wage workers based on his contract theory. According to this theory, workers' behavior is not perfectly observed, and workers' shirking is detected only by chance. According to Lazear, it is optimal for employers to pay their employees less than the workers' marginal product when the workers are young, and more than the workers' marginal product when they are old. This payment system discourages workers from shirking: workers are fired when the shirking is detected, thus, they cannot receive their money back. The human capital theory also predicts wage growth with work experience because of workers' skill formation. Since Lazear's contract theory and the human capital theory are not mutually exclusive, it is very difficult to attribute observed wage growth to either model exclusively. As an indirect test of Lazear's contract theory, Lazear and Moore (1984) (LM, hereafter) compared the wage growth of salary/wage workers and self-employed workers. Since self-employed workers have no incentive to shirk, the wage growth of self-employed workers can be attributed to their human capital accumulation. Assuming identical human capital accumulation between salary/wage (SW) workers and self-employed (SE) workers, the contract theory can explain the difference of wage growth between SW workers and SE workers. In fact, LM found a steeper wage–experience profile among SW workers than SE workers and used this finding as evidence to support Lazear's contract theory.1 Several other theories explain wage growth on the job. Salop and Salop (1976) proposed that workers have heterogeneous probabilities of quitting their jobs, and this is their private information. When workers quit, it is costly for firms because they must then train new workers. It is, therefore, optimal for firms to use a tilted-up wage profile as a screening device, so that only workers with low probabilities of quitting apply for jobs. According to their theory, self-employed workers have flatter wage profiles than those of salary/wage workers because self-employed workers do not have to utilize a tilted-up wage profile as a screening device. Since Salop and Salop's theory and Lazear's contract theory render the same prediction about the difference between SE and SW workers, we cannot distinguish between those two theories only through looking at the two types of wage profiles. Jovanovic (1979) developed a model that argues that workers gradually learn the quality of job match that is specific to particular workers and their respective jobs, and workers who realize they have a poor match quit their jobs. Since workers with poor job matches quit, wages rise among job stayers. In this situation, the average wage growth among job stayers depends on how fast the workers who realize the poor job match change their jobs. As several studies show, SE workers tend to invest in their own businesses at the start up.2 Part of the investment is arguably sunk. Consequently, SE workers who realize they have a poor job match are less likely to change their jobs than SW workers due to the income flow generated from their investment. In this sense, SE workers are “foot fixed” workers, while salary/wage workers are “foot loose” workers. Thus, Jovanovic's theory may also explain Lazear and Moore's finding. These discussions show that Lazear's, Salop and Salop's and Jovanovic's theories can all potentially explain the observed flatter earnings profiles of SE workers as compared with SW workers. Among the alternative explanations for LM's findings, the human capital theory is exclusively pursued in this paper because this theory does not require any type of informational imperfection. It would be most striking to obtain the theoretical prediction consistent with LM's finding, assuming perfect information. Accordingly, the purpose of this paper is to propose a model that predicts the flatter earnings-tenure profile among SE workers based only on the human capital theory. To develop this model, two crucial aspects of self-employment that differentiate it from salary/wage jobs are considered. First, the larger variation in income compared with that experienced by SW workers, and second, the higher return for human capital than that of SW workers. Modeling these two characteristics of SE workers' wage determination with workers' risk aversion, workers' optimal human capital investment decision produces a steeper wage profile among SW workers, as LM observed. In this model, the workers choose to be SW or SE in the first period. Since to be SE is risky, workers with high human capital select SE because the higher return for human capital compensates for the risk. Under the convexity assumption of human capital production, workers with higher human capital invest less in their human capital on the job due to higher opportunity cost. Thus, SE workers, who have higher human capital as a result of self-selection, tend to have a flatter wage profile compared with SW workers because they have less human capital investment on the job. The structure of the rest of this paper is as follows. Section 2 examines the wage risk for SE workers, since the wage risk of self-employment is a crucial assumption for the main conclusion. Section 3 introduces the model of human capital accumulation under the income risk. Section 4 provides evidence consistent with the model. Section 5 concludes.

In this paper, the human capital accumulation by self-employed (SE) and salaried/wage (SW) workers was analyzed. Under the assumptions that the wages of SE workers are more volatile than those of salaried workers and the wages of SE workers more sharply reflect their human capital, SE workers invest less in their human capital because of their higher initial human capital. This difference in human capital investment behavior results in a flatter wage profile for SE than SW workers. This theory was supported by the empirical facts about self-employed workers. The data indicate that SE workers are less likely to enroll in school or participate in training on the job. In particular, it shows that the SW workers with future SE prospects accumulate more general human capital on the job. The model shows that the self-employed workers are not necessarily a good “control” group to test the Lazear contract, since not only does the incentive effect of the Lazear contract produce a steeper wage profile of salaried workers, but the difference in human capital investment has this effect as well. This conclusion does not deny the existence of the Lazear contract, nor the results produced by Lazear and Moore (1984). However, simply attributing the difference of wage profiles to the incentive effect of the Lazear contract may overestimate its importance. The extension of the model to multiple periods and the estimation of a dynamic discrete choice model that models SW/SE career choices would offer a full-blown test for the theory, and this is left for future research.