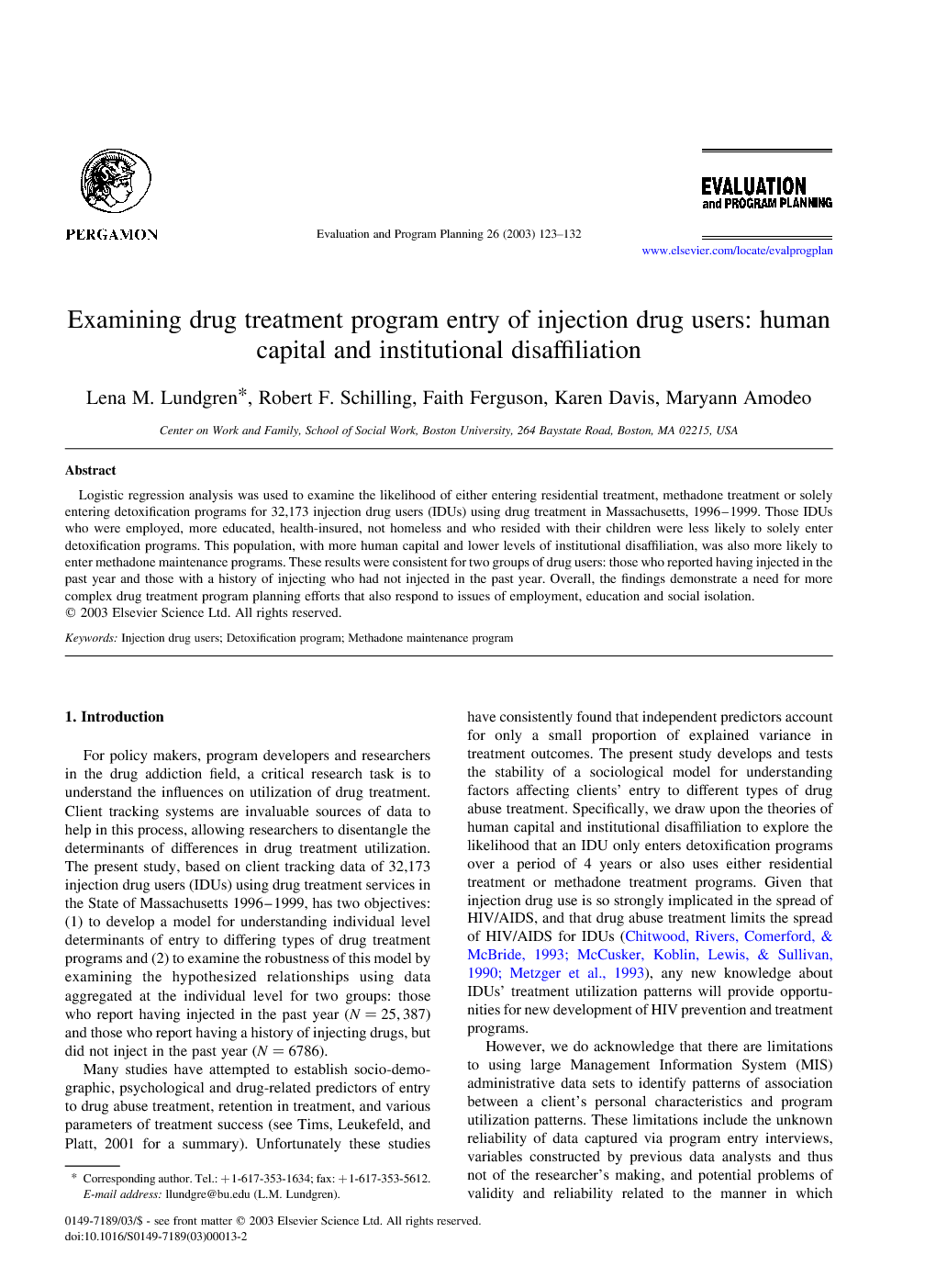 Logistic regression analysis was used to examine the likelihood of either entering residential treatment, methadone treatment or solely entering detoxification programs for 32,173 injection drug users (IDUs) using drug treatment in Massachusetts, 1996–1999. Those IDUs who were employed, more educated, health-insured, not homeless and who resided with their children were less likely to solely enter detoxification programs. This population, with more human capital and lower levels of institutional disaffiliation, was also more likely to enter methadone maintenance programs. These results were consistent for two groups of drug users: those who reported having injected in the past year and those with a history of injecting who had not injected in the past year. Overall, the findings demonstrate a need for more complex drug treatment program planning efforts that also respond to issues of employment, education and social isolation.

For policy makers, program developers and researchers in the drug addiction field, a critical research task is to understand the influences on utilization of drug treatment. Client tracking systems are invaluable sources of data to help in this process, allowing researchers to disentangle the determinants of differences in drug treatment utilization. The present study, based on client tracking data of 32,173 injection drug users (IDUs) using drug treatment services in the State of Massachusetts 1996–1999, has two objectives: (1) to develop a model for understanding individual level determinants of entry to differing types of drug treatment programs and (2) to examine the robustness of this model by examining the hypothesized relationships using data aggregated at the individual level for two groups: those who report having injected in the past year (N=25,387) and those who report having a history of injecting drugs, but did not inject in the past year (N=6786). Many studies have attempted to establish socio-demographic, psychological and drug-related predictors of entry to drug abuse treatment, retention in treatment, and various parameters of treatment success (see Tims, Leukefeld, and Platt, 2001 for a summary). Unfortunately these studies have consistently found that independent predictors account for only a small proportion of explained variance in treatment outcomes. The present study develops and tests the stability of a sociological model for understanding factors affecting clients' entry to different types of drug abuse treatment. Specifically, we draw upon the theories of human capital and institutional disaffiliation to explore the likelihood that an IDU only enters detoxification programs over a period of 4 years or also uses either residential treatment or methadone treatment programs. Given that injection drug use is so strongly implicated in the spread of HIV/AIDS, and that drug abuse treatment limits the spread of HIV/AIDS for IDUs (Chitwood et al., 1993, McCusker et al., 1990 and Metzger et al., 1993), any new knowledge about IDUs' treatment utilization patterns will provide opportunities for new development of HIV prevention and treatment programs. However, we do acknowledge that there are limitations to using large Management Information System (MIS) administrative data sets to identify patterns of association between a client's personal characteristics and program utilization patterns. These limitations include the unknown reliability of data captured via program entry interviews, variables constructed by previous data analysts and thus not of the researcher's making, and potential problems of validity and reliability related to the manner in which the variables are measured, leading to erroneous conclusions. On the other hand, observed relationships between variables are more robust if they hold under differing assumptions underlying the variables. Thus, the robustness of findings will be enhanced if essentially the same findings hold when the same general construct is measured in different ways. Employing such a sensitivity analysis, we examined the relationships between human capital–institutional disaffiliation and type of treatment entered, first, for those IDUs who reported having injected drugs in the past year and second, for those IDUs who reported having a history of injecting drugs but who did not inject in the past year.