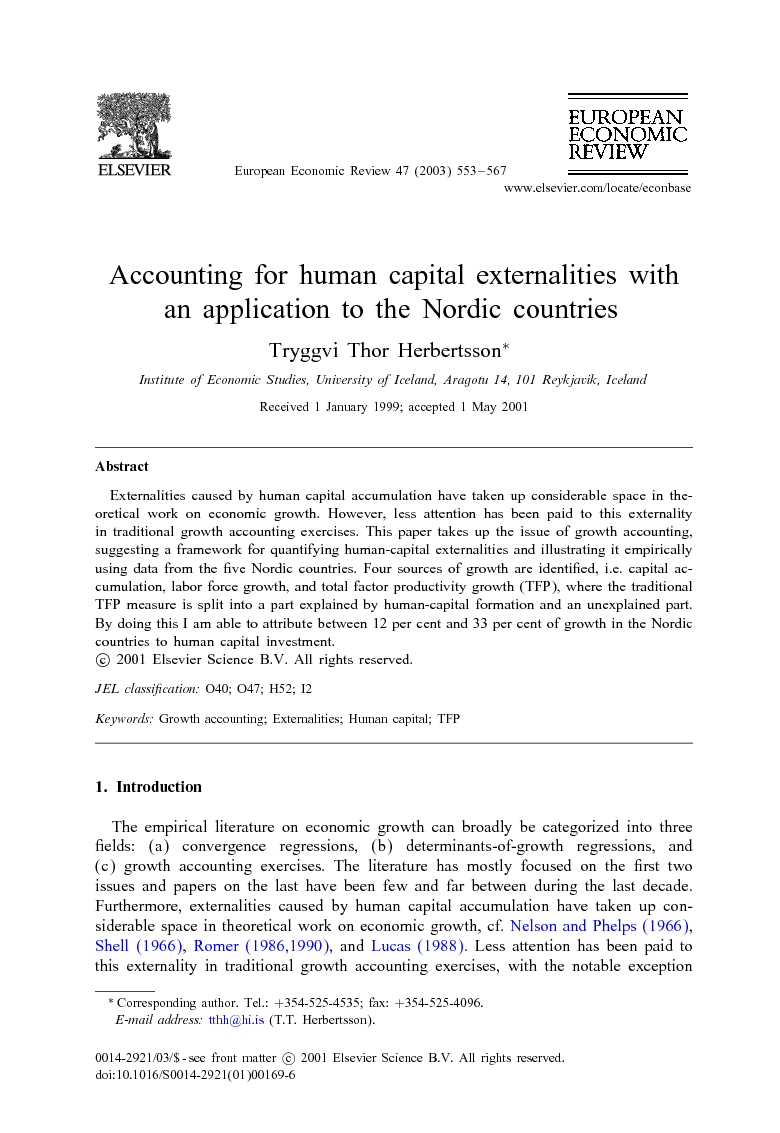 Externalities caused by human capital accumulation have taken up considerable space in theoretical work on economic growth. However, less attention has been paid to this externality in traditional growth accounting exercises. This paper takes up the issue of growth accounting, suggesting a framework for quantifying human-capital externalities and illustrating it empirically using data from the five Nordic countries. Four sources of growth are identified, i.e. capital accumulation, labor force growth, and total factor productivity growth (TFP), where the traditional TFP measure is split into a part explained by human-capital formation and an unexplained part. By doing this I am able to attribute between 12 per cent and 33 per cent of growth in the Nordic countries to human capital investment.

The empirical literature on economic growth can broadly be categorized into three fields: (a) convergence regressions, (b) determinants-of-growth regressions, and (c) growth accounting exercises. The literature has mostly focused on the first two issues and papers on the last have been few and far between during the last decade. Furthermore, externalities caused by human capital accumulation have taken up considerable space in theoretical work on economic growth, cf. Nelson and Phelps (1966), Shell (1966), Romer 1986 and Romer 1990, and Lucas (1988). Less attention has been paid to this externality in traditional growth accounting exercises, with the notable exception of Benhabib and Spiegel (1994), but their paper uses the Nelson and Phelps (1966) framework to quantify the effects of human capital accumulation and catch-up on total factor productivity and growth.1 The paper presented here takes up the issue of growth accounting, suggesting a framework for quantifying human capital externalities and illustrating it empirically using data from the five Nordic countries. The basis of growth accounting is the quantification of factor shares, and the empirical literature can be divided into two branches, depending on the method used to obtain their relative factor weight. One method, which is based on estimating a production function, originates in Solow's (1957) seminal paper. The other is the sources-of-growth methodology, which is an accounting approach based on national accounts. This approach was suggested by Jorgenson and Griliches (1967). Both approaches lack a satisfactory foundation in economic theory, as neither offers any explanation of how changes in inputs and improvements in TFP relate to elements, such as preferences, technology, and government policy, all of which can reasonably be thought of as fundamental to economic growth (cf. Barro and Sala-i-Martin, 1995). On the basis of traditional growth accounting exercises, the contribution of technology to growth in aggregate output is normally thought to be in the range of 30–50 per cent.2 Such a large contribution from a component alien to the model is obviously disappointing as the aim of empirical research into economic growth is to observe its causes within an economic theoretical framework. The point of departure here is the connection between formal education and human capital externalities. Previous studies show that private returns to formal education are considerably lower than social returns.3 One reason might be that if innovations produce externalities, like in Romer (1990) and Aghion and Howitt (1992), then education, by its stimulus of innovations, also yields positive externalities, and consequently private and social returns to education differ, cf. Nelson and Phelps (1966). This results in too little demand for private education and consequently too little supply of formal human capital. Therefore, governments in most countries have found it necessary to subsidize formal education to internalize the positive externality involved, cf. Glomm and Ravikumar 1992, Glomm and Ravikumar 1994a, Glomm and Ravikumar 1994b and Glomm and Ravikumar 1997, Zhang (1997), and Zhang and Casagrande (1998). In the highly stylized model presented here, the government is motivated to subsidize formal schooling because it observes the positive externality on returns to private capital and labor productivity through the accumulation of human capital. Since households demand too little education under a private education scheme, the government subsidizes human capital accumulation to internalize this positive externality for the economy as a whole. In this paper I combine the production function estimate and sources-of-growth methodology, using observable factor shares to estimate a system of Euler equations derived from a utility maximization problem. By using the observable factor shares and the estimated parameters I am able to trace the sources of growth in the Nordic countries not only to capital, labor, and total factor productivity, but also human capital accumulation. The paper proceeds as following. In Section 2, I construct a model where human capital externalities are taken into account. The model consists of a discrete Ramsey economy with three sectors: firms, government, and labor–leisure choosing households. The representative firm operates within a neo-classical framework facing constant returns to private factors, but increasing returns when an externality resulting from human capital investment is taken into account. This is caused by government subsidies to formal education. The government sector finances human capital investment by levying an income tax on households. In Section 3, I estimate the system of Euler equations obtained from the model in Section 2, using data for the five Nordic countries, i.e., Denmark, Finland, Iceland, Norway, and Sweden. In Section 4, I calculate the growth of TFP in the period 1970–1992. For comparison, I calculate the rate of change of TFP, using traditional methods and the observed capital shares. Finally, a decomposition of annual average growth in the Nordic countries during the period 1970–1992 is presented. Four sources of growth are identified, i.e., capital, labor, and total factor productivity (TFP), which is split into a part explained by human capital formation and an unexplained part. By doing this I am able to attribute between 12 and 33 per cent of growth in the Nordic countries to human capital investment. Section 5 contains the conclusions.

This paper is concerned with developing a framework for accounting for human capital externalities and illustrating it empirically using data from the five Nordic countries. Utilizing the framework presented, I am able to quantify the effects of capital, hours worked, total factor productivity, and investment in formal education on economic growth. This results in a substantial decrease in TFP, i.e., the unexplained part of growth, from traditional methods. Some reservations are also in order: The results will be influenced by some specific factors in each individual country, e.g., the use of oil and gas resources in Norway and utilization of fish stocks in Iceland.11 These differences call for an elaboration of results in future studies. The framework presented here does not only apply to human capital externalities. It can easily be extended to include variables, such as natural resources and R&D, but this calls for future work.