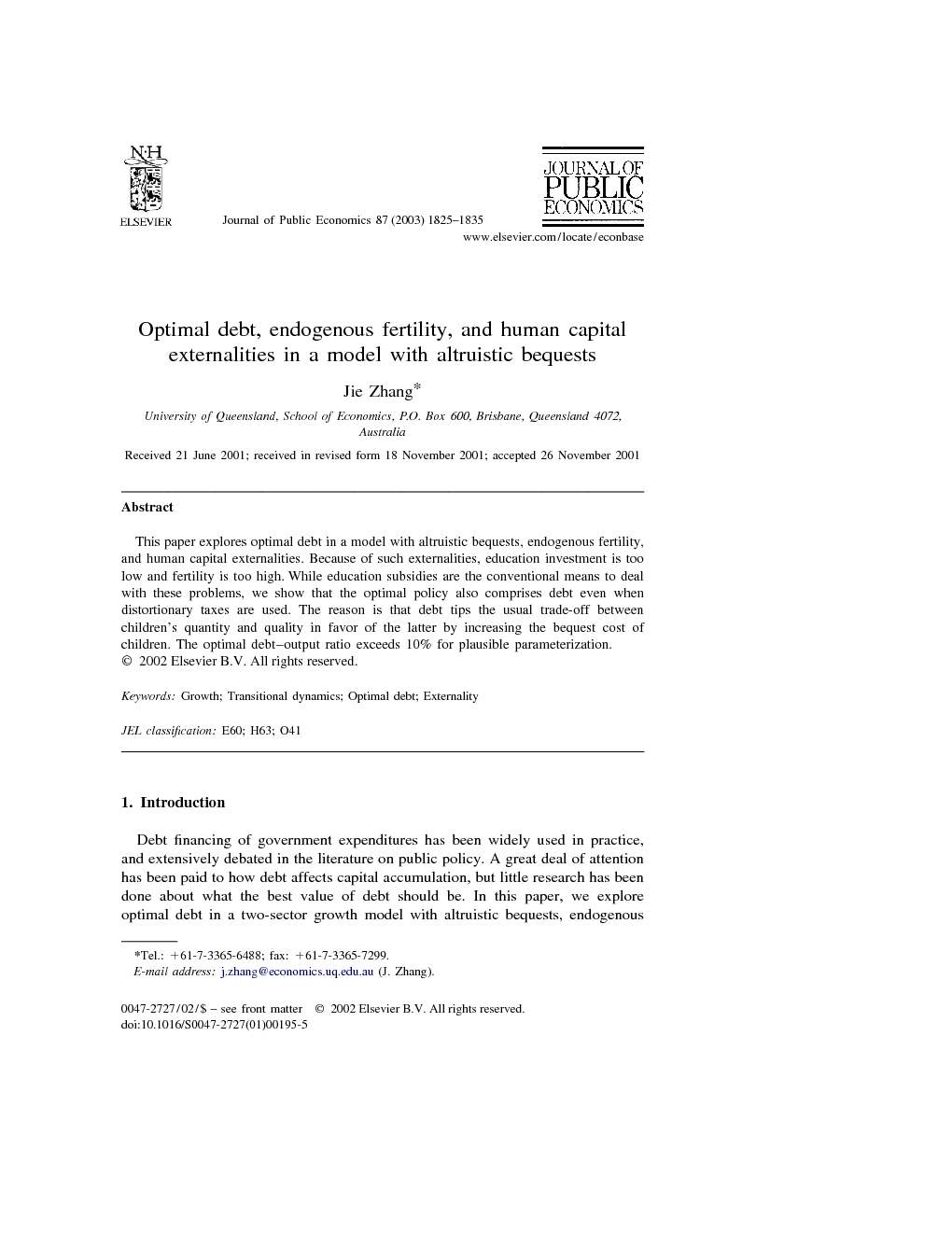 This paper explores optimal debt in a model with altruistic bequests, endogenous fertility, and human capital externalities. Because of such externalities, education investment is too low and fertility is too high. While education subsidies are the conventional means to deal with these problems, we show that the optimal policy also comprises debt even when distortionary taxes are used. The reason is that debt tips the usual trade-off between children’s quantity and quality in favor of the latter by increasing the bequest cost of children. The optimal debt–output ratio exceeds 10% for plausible parameterization.

Debt financing of government expenditures has been widely used in practice, and extensively debated in the literature on public policy. A great deal of attention has been paid to how debt affects capital accumulation, but little research has been done about what the best value of debt should be. In this paper, we explore optimal debt in a two-sector growth model with altruistic bequests, endogenous fertility, and human capital externalities.1 Such externalities lower the private rate of return to education, so the fraction of output spent on children’s education is too low. Through the trade-off between the quantity and quality of children, fertility must be too high accordingly. While education subsidies are the conventional means to deal with these problems, we will show that the optimal policy also comprises debt even when distortionary taxes are used. This potential role of debt relates closely to previous work on how debt affects income allocation and fertility through increasing bequests. First, the increase in bequests by altruistic parents offsets future tax liabilities of government debt, and neutralizes the impact of debt on income allocation (see e.g. Barro, 1975). Reflecting this neutrality, debt has no effect on the fractions of income allocated to consumption, children’s education, and investment in physical capital in this paper. Hence, debt itself cannot increase the fraction of output spent on children’s education to its socially optimal level. Second, the increase in bequests means a rise in the bequest cost of having children, through which debt reduces fertility (see e.g. Lapan and Enders, 1990 and Wildasin, 1990). Thus, higher debt leads to the situation in which fewer children share the same fraction of income spent on their education; namely, debt should increase education investment per child (see e.g. Zhang, 1997). Overall, debt may help mitigate the efficiency problem arising from education externalities. However, this role of debt may seem to fade once tax distortions and education subsidies are considered. Conventionally, education subsidies are viewed as the natural means to tip children’s quantity–quality balance towards the latter. But education subsidies alone cannot bring education investment and fertility to their respective first-best levels at the same time. Combining debt with education subsidies may therefore do better than using them separately. Realistically, when debt repayment and education subsidies have to be financed by distortionary taxes, one may also wonder whether the tax distortion outweighs any possible gain. A consumption tax, for example, increases fertility by raising the cost of consumption relative to the cost of having children, possibly offsetting the negative fertility effect of debt or education subsidies. In this paper, we will demonstrate how debt, combined with education subsidies and consumption taxes, can achieve the first-best outcome. Compared to the studies on how debt affects capital accumulation, exploring optimal debt can contribute to debt management, particularly in countries under heavy pressure of national debt.2 For example, Aiyagari and McGrattan (1998) found that the optimum quantity of debt is close to the postwar US level by assuming precautionary saving and borrowing constraints. The present paper differs from their work in that we focus on how to combat problems of education externalities in a two-sector growth model with endogenous fertility and altruistic bequests. A novel feature of this model is to analytically solve the entire equilibrium path in a two-sector growth model, in contrast to the steady-state analysis in Zhang, 1995 and Zhang, 1997. Based on this, we will derive a reduced-form solution for the welfare function. This welfare function captures the effects of debt in both the short run and the long run, and therefore enables an analytical design of optimal debt policy.3 The rest of the paper is organized as follows. Section 2 introduces the model. Section 3 presents the results. Section 4 gives some concluding remarks.

This paper has explored optimal debt in a model with education spillovers, altruistic bequests, and endogenous fertility, where the education spillover causes under-investment in education but over-reproduction of population. It shows that combining debt with education subsidies and consumption taxes can achieve the first-best outcome under plausible parameterization. For strong externalities, the optimal debt–output ratio exceeds 10%. The results may have some useful policy implications. For countries under pressure of high national debt and low fertility, cutting debt may improve welfare and increase reproductive rates. For countries with high fertility and low education investment, on the other hand, raising debt to a moderate level may improve welfare through reducing the number of children and increasing their productivity. The results of this paper are derived by using simple functional forms for tractability. It will be interesting to see whether more general functional forms will change the results in future research.