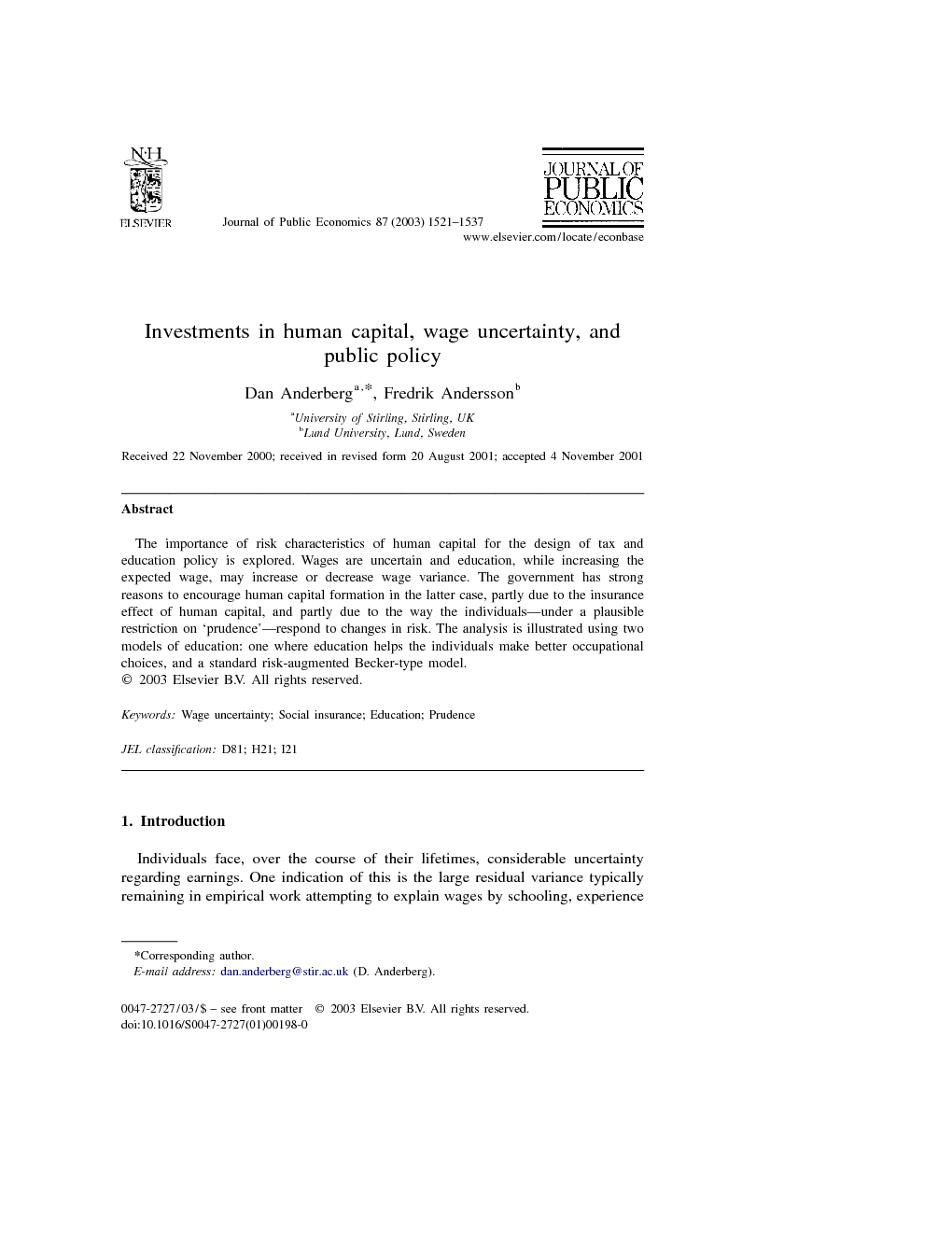 The importance of risk characteristics of human capital for the design of tax and education policy is explored. Wages are uncertain and education, while increasing the expected wage, may increase or decrease wage variance. The government has strong reasons to encourage human capital formation in the latter case, partly due to the insurance effect of human capital, and partly due to the way the individuals—under a plausible restriction on ‘prudence’—respond to changes in risk. The analysis is illustrated using two models of education: one where education helps the individuals make better occupational choices, and a standard risk-augmented Becker-type model.

The starting point of the paper was the simple insight that whether education increases or decreases wage variability is likely to be important when education policy and tax policy are jointly determined in a second-best environment. If e.g. education reduces wage variability it has a direct insurance effect which justifies encouraging human capital formation since it mitigates the tax problem. However, as usual, the simple intuition needs to be supplemented since the agents are likely to react to the change in the level of education. There we noted that—beyond a standard substitution effect—the agents’ reactions are also determined by the risk-properties of human capital. In particular, we found that, under plausible conditions, these risk-effects unambiguously reinforce the policy conclusions derived from the direct insurance effect. The last part of the paper compared two different education technologies that have different implications for the riskiness of wages but are otherwise similar. The comparison provides an example that, arguably, indicates that the effects can be important in practice. The analysis has focused entirely on the case where wage uncertainty is not resolved until after the workers commit to labour supplies; an alternative that may be more appropriate if uncertainty arises primarily in the education technology is to assume that a worker learns about her earning capacity prior to choosing labour supply (see Hamilton, 1987). If the wage realization is not observed by the government a standard optimal taxation problem obtains. By affecting human capital formation the government can then affect the severity of the tax problem. It can be shown that the same type of arguments apply: if human capital moderates (exacerbates) wage variability it has a direct insurance effect which calls for education to be over-provided (under-provided). Of course, in this case labour supplies are determined by actual wage outcomes (as opposed to risk) but the aggregate labour supply can still be related to the variability in wages and risk preferences. Hence, the aggregate compensated labour supply response can again be disaggregated into a substitution effect and a risk-effect; moreover, as for the case presented in the paper, the risk-effect tends to reinforce the direct insurance effect under plausible conditions on risk-aversion and prudence. The paper points to several directions for future research. One is to further investigate and disentangle the effect of human capital on wage and earnings risk. In general, several sources of earnings uncertainty will co-exist and human capital can be expected to affect these sources differently. Whereas we have adopted the approach of aggregating all sources of uncertainty and assumed that one tax system exists to provide insurance, this is clearly unrealistic. In reality several programmes exist to cover specific sources of earnings losses such as unemployment. Hence if multiple sources of uncertainty can be identified it would also seem desirable to combine models of general taxation with models of more specific social insurance programmes.