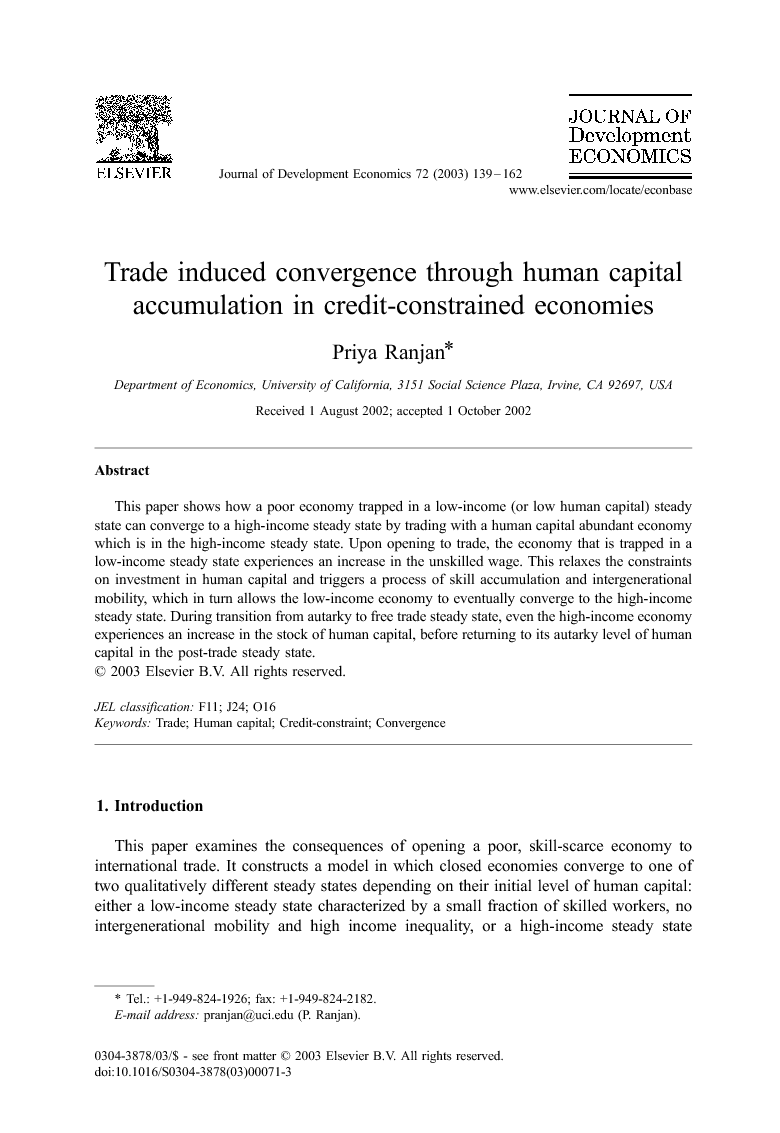 This paper examines the consequences of opening a poor, skill-scarce economy to international trade. It constructs a model in which closed economies converge to one of two qualitatively different steady states depending on their initial level of human capital: either a low-income steady state characterized by a small fraction of skilled workers, no intergenerational mobility and high income inequality, or a high-income steady state characterized by a large fraction of skilled workers, positive rates of intergenerational mobility and low income inequality. The existence of a low-income steady state—the poverty trap—is a result of credit constraints. In this setting, it is shown that an economy that is trapped in a low-income steady state experiences an increase in the unskilled wage upon trading with an economy in the high-income steady state. This, in turn, relaxes the constraints on investment in human capital and triggers a process of skill accumulation and intergenerational mobility in the low-income economy. The low-income economy eventually converges to the high-income steady-state. During transition from autarky to free trade steady state even the high-income economy experiences an increase in the stock of human capital, before returning to its autarky level of human capital in the post-trade steady state. The result on convergence driven by accumulation of human capital is consistent with the recent experience of East Asian economies where spectacular growth has come mainly due to the rapid accumulation of both physical and human capital concomitant with an increasing importance of international trade (e.g. Young, 1995). The model can also explain why some countries fail to grow, while others with similar initial conditions are able to grow. Integration with the world economy plays a key role according to our results.1 Despite the large body of empirical evidence on trade-induced convergence,2 the theoretical underpinnings seem less than satisfactory. Some earlier attempts to study the impact of trade on factor accumulation have extended the static Heckschser–Ohlin model of trade to a dynamic setting (e.g. Stiglitz, 1970, Findlay and Kierzkowski, 1983 and Grossman and Helpman, 1991), finding that trade would not lead to a convergence, but rather a divergence in factor endowments of trading economies. However, these papers do not take into account the possibility that credit constraints would influence physical and human capital accumulation. An implication of credit constraints, shown recently in several papers, is that small differences in initial conditions across countries can lead to large differences in income levels.3 These models generate what is called a club convergence hypothesis, according to which the per capita incomes of parametrically identical economies converge to one another, provided their initial conditions are similar in the sense of being in the basin of attraction of the same steady state equilibrium; otherwise they diverge (see Galor, 1996). We integrate these two literatures by constructing a dynamic Heckscher–Ohlin model where skill accumulation is subject to credit constraints. The closed economy set up in our model is a three-sector extension of the one sector model developed in Maoz and Moav (1999) to show how intergenerational mobility increases along the process of development. The value added in our paper comes from the extension to an open economy. In addition, while Maoz and Moav (1999) proceed with numerical examples, we derive a simple condition on productivity and bequest parameters which guarantees the existence of a unique and dynamically stable high human capital equilibrium along with a continuum of poverty trap equilibria. Among other related papers, Mountford (1998) extends a model of multiple equilibria in Galor (1992) to the open economy context and shows the possibility of trade-induced convergence. In a model where trade enhances the possibility of multiple equilibria, Deardorff (2001) investigates the opposite question of whether restricting trade can get a trading economy out of poverty trap, and finds the answer to be in the negative. Since saving is done only from labor income and not from capital income, which is also the source of multiple equilibria in both these papers, trade affects physical capital accumulation by altering labor income. In contrast, the focus of our paper is on how trade can cause convergence by releasing an economy from a poverty trap via its impact on human capital accumulation and intergenerational mobility when human capital accumulation is subject to credit constraints. Since these papers identify alternative channels of influence of trade in dynamic models, they are complementary to each other. Cartiglia (1997), Owen (1999), and Ranjan (2001) also consider the possibility that borrowing constraints affect skill accumulation and show that trade could affect human capital accumulation by relaxing borrowing constraints.4 Since these papers do not solve for autarky equilibrium, they only analyze the impact of trade liberalization on parametrically distinct small open economies. They do not show how trade can release an economy from poverty trap and consequently cause convergence.5 Another value added of our framework, in contrast to the existing literature, is that in addition to studying the steady state behavior, it allows us to study the evolution of human capital and wage inequality across both countries when converging to the free trade steady state. Finally, we derive some policy implications from our model. The rest of the paper is organized as follows. Section 2 develops the closed economy model. Section 3 extends it to a two country model of the world economy. Section 4 concludes.