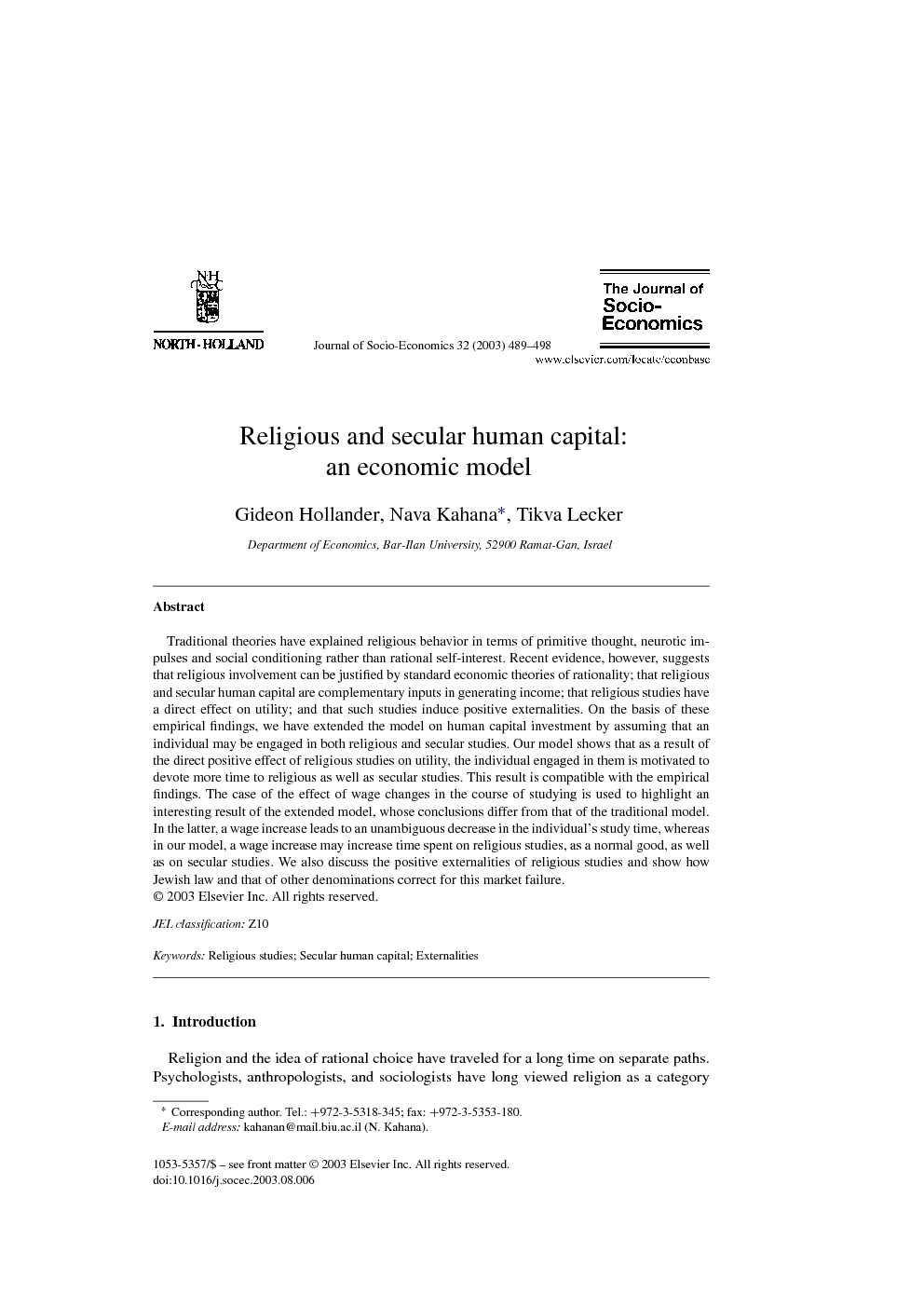 Traditional theories have explained religious behavior in terms of primitive thought, neurotic impulses and social conditioning rather than rational self-interest. Recent evidence, however, suggests that religious involvement can be justified by standard economic theories of rationality; that religious and secular human capital are complementary inputs in generating income; that religious studies have a direct effect on utility; and that such studies induce positive externalities. On the basis of these empirical findings, we have extended the model on human capital investment by assuming that an individual may be engaged in both religious and secular studies. Our model shows that as a result of the direct positive effect of religious studies on utility, the individual engaged in them is motivated to devote more time to religious as well as secular studies. This result is compatible with the empirical findings. The case of the effect of wage changes in the course of studying is used to highlight an interesting result of the extended model, whose conclusions differ from that of the traditional model. In the latter, a wage increase leads to an unambiguous decrease in the individual’s study time, whereas in our model, a wage increase may increase time spent on religious studies, as a normal good, as well as on secular studies. We also discuss the positive externalities of religious studies and show how Jewish law and that of other denominations correct for this market failure.

Religion and the idea of rational choice have traveled for a long time on separate paths. Psychologists, anthropologists, and sociologists have long viewed religion as a category of behavior largely outside of the rational calculus. Indeed, according to many 19th century scholars—including Marx, Freud, and Comte—intense religious commitment sprang from nothing less than outright irrationality. Later on, scholars such as Davis (1949), Ellis (1980), Ostow (1990), Watters (1993), and Bruce (1993), also stressed the irrationality of religious faith, claiming that religious observance in many respects is equivalent to irrational thinking and emotional disturbance. However, contemporary evidence suggests that religious behavior is, in fact, sensitive to perceived costs and benefits and is compatible with advanced education and scientific training (e.g., Iannaccone et al., 1998). This evidence has given rise to recent research on religious behavior, which leans heavily on the assumption of rational choice. Many studies consider secular and religious human capital as complementary in the marketplace (e.g., Tomes, 1985) as well as in the social sphere. Recently, Ewing (2000) claimed that the observance of Catholicism might affect wages in two ways. First, by enhancing productivity as a result of the teaching of discipline. Second, firms may recognize that Catholics have certain desirable traits that are generally unobservable, such as motivation, honesty, trustworthiness, or a strong work ethic. Thus, investment in religious capital may be considered signaling for a better worker for the labor market. In the social sphere, Iannaccone (1995), among others, claims that the greater the stock of religious knowledge, understanding of ritual, and familiarity with liturgy and sacred texts, the higher the expected benefit from regular church or synagogue attendance. Such participation in organized religion should contribute toward improving social interaction by maximizing opportunities for inter-personal contact and group approval. Using Becker’s terminology (1996), the accumulated social capital would be expected to yield a stream of social benefits. Moreover, religious capital accumulation would provide an incentive for keeping up religious participation, which in turn would augment the human capital stock (e.g., Smith et al., 1998). In a survey of all of the relevant published empirical studies, Bergin (1983) found that most of them reported a positive relationship between religious observance and mental health. Ellison (1993), who extensively reviewed the empirical literature on religious observance and health reported strong and consistent evidence for the enhancement of physical health, self-esteem, and life satisfaction brought about by religious belief and activity.1 Moreover, the members of strict religious groups enjoy longer lives and lower rates of cancer, stroke, hypertension, and heart disease than do the general population, probably because they tend to observe their religions’ strictures governing smoking, drinking, drug use, and other health-impairing behavior. The causes for the correlation between health and religious observance include the positive link between church involvement and social support and the negative link between faith and stress Levin (1994). Religious involvement may also affect patterns of marriage and marital stability (e.g., Heaton and Pratt, 1990) and negatively influence divorce, abortion, children born out of wedlock Berggren (1997), and suicide Huang (1996). In addition, there are also spiritual or non-temporal aspects to becoming religiously involved, most notably the perceived achievement of divine approbation and rewards, both in this life and—not least—in the one to come. Thus, it may be concluded that religious activities confer direct positive utility. In his basic model on human capital investment, Becker (1967) treats the individual as a firm producing only secular human capital, with time as the main homogeneous input. Later, Azzi and Ehrenber (1975), in their Household Production Model of church attendance, refer to the direct effect of religious activities on utility, particularly regarding the afterlife. Taking human capital investment as predetermined, the positive effect of religious activities on earnings has not been considered in their analysis. In fact, none of the existing models combine the following two facts: (1) religious and secular human capital are complementary inputs in generating income; and (2) religious studies have a direct effect on utility. With these facts in mind, in order to fill this void, we have extended the human capital investment model by assuming that an individual may be engaged in both religious and secular studies and generate income. Section 2 describes the extended model. Section 3 discusses the positive externality of religious studies and shows how Jewish law and other denominations corrects for this market failure. Section 4 analyzes the effects of wage changes while studying on the individual’s investment in religious and secular human capital. The paper closes with a summary.

Recent evidence indicates that religious behavior is consistent with rational economic approach; religious and secular human capital are complementary inputs in generating income; religious studies have a direct effect on utility; and they involve positive externalities. In view of these empirical findings, we have extended the human capital investment model by assuming that an individual may be engaged in both religious and secular studies. It has been shown that the direct effect of religious studies on utility motivates the individual to invest more in religious as well as secular studies, a result that is compatible with the empirical findings. Analyzing the effect of wage changes while studying—a case in which our extended model may lead to a conclusion that differs from the traditional one—highlights an interesting result. In our model, a wage increase may (depending on substitution and income effects) increase the time spent on religious studies (as a normal good), as well as on secular studies, due to the direct effect of religious studies on utility, whereas in the traditional model, a wage increase results in an unambiguous decrease in the individual’s study time. We also discuss the positive externalities of religious studies and show how Jewish law and that of other denominations correct for this market failure