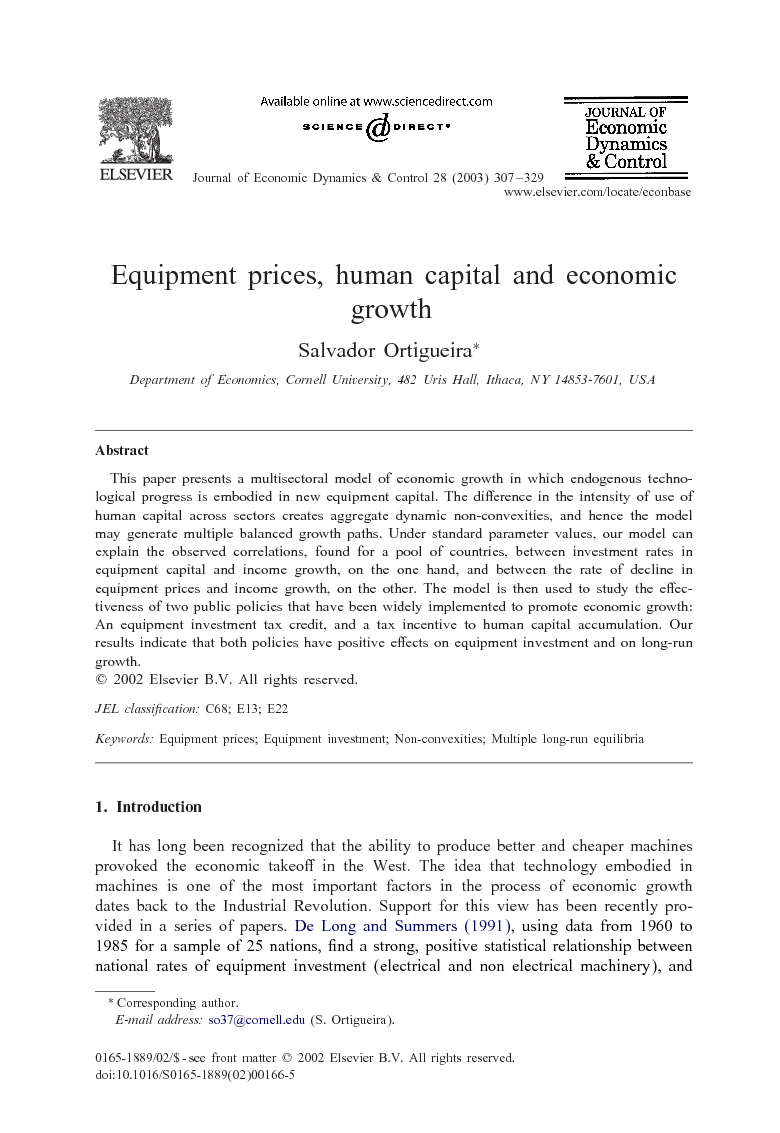 This paper presents a multisectoral model of economic growth in which endogenous technological progress is embodied in new equipment capital. The difference in the intensity of use of human capital across sectors creates aggregate dynamic non-convexities, and hence the model may generate multiple balanced growth paths. Under standard parameter values, our model can explain the observed correlations, found for a pool of countries, between investment rates in equipment capital and income growth, on the one hand, and between the rate of decline in equipment prices and income growth, on the other. The model is then used to study the effectiveness of two public policies that have been widely implemented to promote economic growth: An equipment investment tax credit, and a tax incentive to human capital accumulation. Our results indicate that both policies have positive effects on equipment investment and on long-run growth.

In the model studied in this paper, which is essentially taken from Greenwood et al. (1997), production takes place in three different sectors: There is a consumption-goods sector, an equipment-goods sector, and an education sector. The main feature of this model is that technology is embodied in new equipment goods. Even though this is an old idea which had been already used by different authors, it was not until the work of Greenwood et al. (1997) that it was introduced in a computable general equilibrium model with the purpose of explaining the evolution of total factor productivity in the U.S. economy. Our main contribution in this paper is to show that in a model with technology embodied in equipment goods, initial conditions, through their effects on the relative price of equipment, play a crucial role in the process of growth. Thus, countries which are appropriately endowed with human capital will start producing new equipment goods that can lead the economy to a long-run equilibrium with sustained growth in income per capita. On the contrary, countries with relatively low human capital may end up in an equilibrium with no long-run growth. When the model is calibrated to match some key U.S. observations, we find that there is also a balanced growth path with no growth and constant equipment prices. This model might then be used to explain the observed persistence in income inequality across countries in terms of differences in history. The results in this paper can also be seen as a contribution to the theoretical literature on dynamic non-convexities. In this regard, our model provides microeconomic foundations for the existence of such non-convexities. Contrary to previous models in this literature, we do not need to assume non-convexities at the disaggregate level. Indeed, we show that with constant returns to scale in all sectors, and with asymmetric labor quality across sectors, the dynamic production possibility function is non-convex. This important effect of the lack of symmetry in the quality of labor across sectors seems to be unnoticed in the growth literature. This point should then be emphasized as an important factor in the growth process.