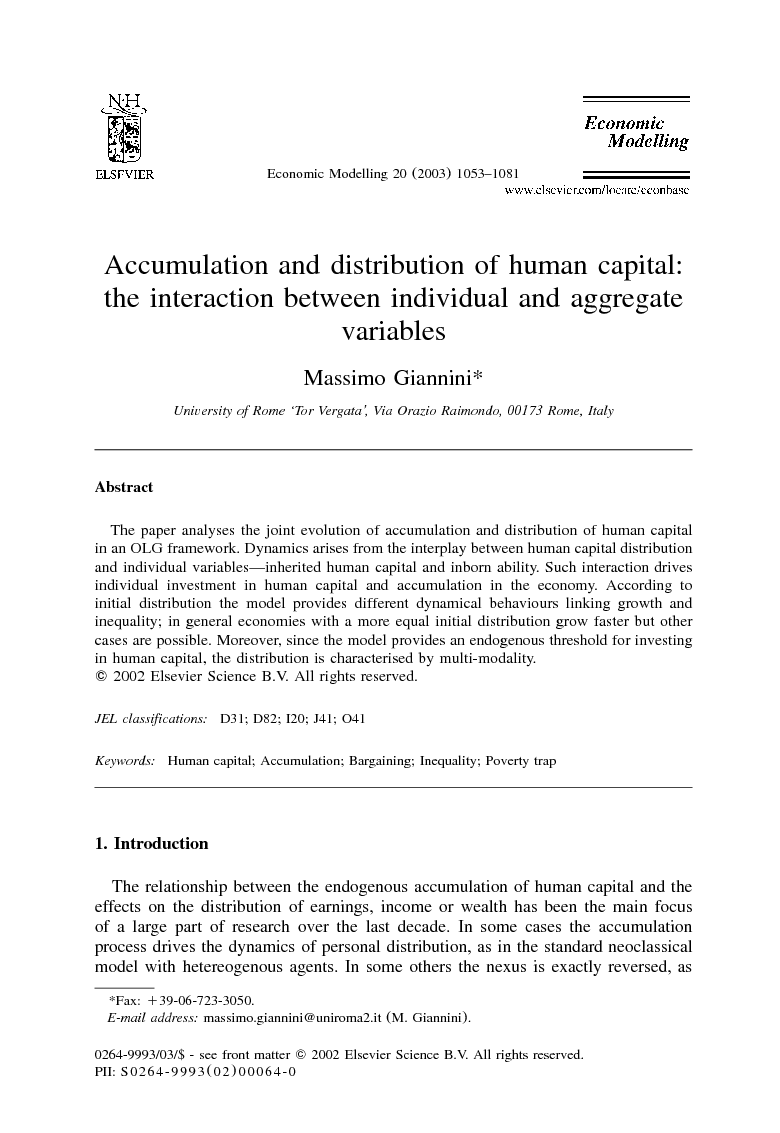 The relationship between the endogenous accumulation of human capital and the effects on the distribution of earnings, income or wealth has been the main focus of a large part of research over the last decade. In some cases the accumulation process drives the dynamics of personal distribution, as in the standard neoclassical model with hetereogenous agents. In some others the nexus is exactly reversed, as in the Political Approach, where the relative distance between median and mean incomes decides the amount of taxation in the economy which, in turn, affects the accumulation process of physical and human capital in rational agents. In any case, it is hard to think that the causative nexus between growth and distribution is a ‘one-way’ relationship but rather a feedback rule. As stressed by Galor and Tsiddon (1997), Benabou (1996), Durlauf (1996) and Gradstein and Justman (1997), feedback can arise in the accumulation of human capital from social and parental background and local variables, such as local taxation, school quality or the enforcement of property rights. These ‘neighbourhood’ effects involve a powerful feedback between individual behaviour and economic performance: socio-economic variables affect individual behaviour which in turn modify the socio-economic context in a circular way. As a result of this continuous interplay between the individual and the economy the common dynamics of growth and distribution arises. The common thread of this literature is the persistence of inequality over time and the dependence on the initial distribution of income or human capital; in the long run, the personal distribution of income or human capital tends to be polarised around two or more modal points and in general the convergence process towards these points follows a ‘club convergence’. Empirical support to the thesis comes from Quah, 1996a, Quah, 1996b and Quah, 1997 and Durlauf and Johnson (1995) among others. The latter identify four different regimes in which subgroups of countries defined by initial conditions obey separate linear models1 while the former finds a bimodality in the transition distribution across countries which means that countries grow along two separate dynamical paths with low probability for a country to switch from one path to the other. More recently, Milanovic and Yitzhaki (2001), have decomposed total income inequality in the world into three groups: the rich G7, the less developed countries and the middle-income countries; they found that the middle-group is very thin and that there is very little overlap between rich and poor countries. In other words they find further evidence of a bimodal distribution of income over the world. This work sets out further insights into the interplay between individual accumulation of human capital and the distributive curve by means of a theoretical model. Unlike current literature, we model the feedback mechanism linking individual and aggregate variables via the labour market: individuals invest in human capital by comparing discounted expected income earned by working as an unskilled worker after compulsory school and expected income obtained by being employed as a skilled worker, after having invested further resources in schooling. This choice depends on inherited human capital, schooling cost, genetic ability, and expected unskilled wage, related to the probability of being employed as unskilled, which in turn depends on the conditions of the labour market related to human capital distribution characteristics. Unemployment among unskilled individuals is possible because of an imperfect labour market characterised by bargaining; it is worth stressing that bargaining is not assumed a priori but it arises endogenously in the economy because of asymmetric information between firms and unskilled workers, as shown later. The joint dynamics of accumulation and distribution of human capital over time is characterised both by monotone and oscillatory paths; in both cases an endogenous poverty trap arises2. Dynamical patterns range from low accumulation and high inequality to the opposite situation, with a large number of intermediate behaviours; in general more unequal initial distributions tend to enlarge the poverty trap, slowing down accumulation and increasing inequality. This variety of dynamics is induced by the dependence on the characteristics of human capital distribution, parameters and initial conditions. What the model shows is the lack of a well-established and predictable rule linking growth and distribution, as instead can be in the Kuznets’ curve. The empirical contribution of Deininger and Squire (1998), using panel data over 49 countries shows that the Kuznets hypothesis can be rejected in 40 out of 49 countries; for the remaining nine countries, four show a U-shaped relationship rather than an inverted U, as suggested by Kuznets. Kuznets’ curve has been identified only in five countries. This means that the contemporaneous inequality–growth relationship is far from being stable and predictable and, according to parameters and initial conditions, each country follows its own dynamical process. So we have to account for a variety of behaviours: our theoretical model is able to provide such a variety. From this point of view, I hope that it will be helpful in understanding, at least partially, the inner mechanics of the inequality–growth nexus. The paper is divided as follows: Section 2 presents the model, Section 3 investigates its dynamical properties, Section 4 studies the accumulation path and Section 5 takes account of agents’ hetereogeneity due to inborn ability. Section 6 shows some numerical solutions of the model and Section 7 a calibration exercise for Italy. Conclusions follow.

The results of the paper show how the dynamics of human capital accumulation and distribution depends strongly on the interaction between the characteristics of the distribution itself—the ‘macro’ variable—and the ‘micro’ variables—human capital endowment, genetic ability—via individual choice about human capital investment. When individual decisions are affected by ‘macro’ variables, the economic evolution becomes more complex and several dynamical behaviours are possible according to parameters and initial conditions. Regarding policy implications, it is obvious that any reduction of the endogenous poverty trap fosters growth. This opens up to a redistributive policy which can be implemented in two different forms: either reducing the educational cost for trapped individuals or subsidising them directly. In both cases the taxation scheme should be analysed according to the impact on growth and inequality. Finally a word on further refinements. Given the dependence of results on parameters, it is possible to add further non-linearities to the model making some crucial parameters endogenous, enriching the set of possible dynamical behaviours. I refer especially to the coefficients measuring bargaining power, viz. β and γ, which could depend on the unemployment rate in the economy, increasing non-linearities hence non-monotone paths. As remarked by Atkinson (1996), in fact, the empirical observation is characterized by relatively sudden changes in the inequality indexes; a theoretical framework, although simple, should take into account a large number of dynamical behaviours relating accumulation and distribution of human capital; I hope this paper partially contributes towards this goal.