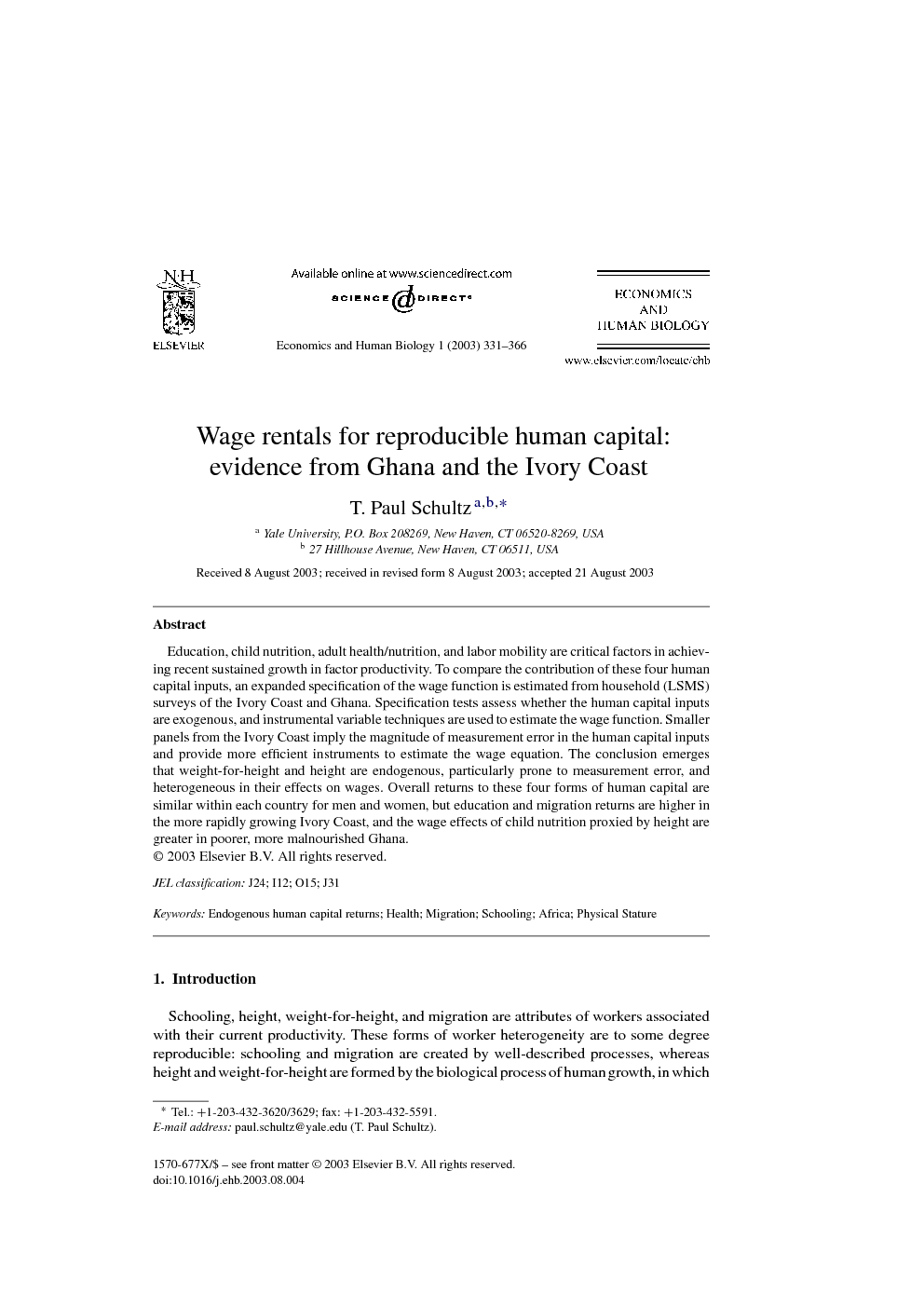 Education, child nutrition, adult health/nutrition, and labor mobility are critical factors in achieving recent sustained growth in factor productivity. To compare the contribution of these four human capital inputs, an expanded specification of the wage function is estimated from household (LSMS) surveys of the Ivory Coast and Ghana. Specification tests assess whether the human capital inputs are exogenous, and instrumental variable techniques are used to estimate the wage function. Smaller panels from the Ivory Coast imply the magnitude of measurement error in the human capital inputs and provide more efficient instruments to estimate the wage equation. The conclusion emerges that weight-for-height and height are endogenous, particularly prone to measurement error, and heterogeneous in their effects on wages. Overall returns to these four forms of human capital are similar within each country for men and women, but education and migration returns are higher in the more rapidly growing Ivory Coast, and the wage effects of child nutrition proxied by height are greater in poorer, more malnourished Ghana.

Schooling, height, weight-for-height, and migration are attributes of workers associated with their current productivity. These forms of worker heterogeneity are to some degree reproducible: schooling and migration are created by well-described processes, whereas height and weight-for-height are formed by the biological process of human growth, in which the inputs of nutritional intakes, protection from exposure to disease, health care, and activity levels combine to exert a net cumulative effect on the individual’s realization of their genetic potential. The impact of height and weight-for-height on labor productivity and well-being have been extensively documented in by economic historians (Fogel, 1994; Steckel, 1995), and more recently studied in contemporary random surveys from low-income populations (Strauss and Thomas, 1995). These worker attributes are viewed here as indicators of human capital because they can be augmented by social or private investments, but they also vary across individuals because of genetic and environmental factors that are not controlled by the individual, family, or society. This paper estimates the productive payoff to the formation of these four human capital stocks in two low-income countries.1 Because the cost of creating these stocks has not been accounted for, only estimates of the wage rental values of these stocks are offered here and not internal rates of return. Several questions are addressed. First, how important for labor productivity is each of these four dimensions of worker heterogeneity considered jointly, for men and women separately, in two Sub-Saharan African countries where the conditions of health and nutrition are relatively poor?2 Second, do the wage payoffs to forms of human capital change when one allows for human capital stocks to be endogenous, heterogenous, and measured with random error. Finally, how do these forms of human capital interact in their determination of worker productive capacity; can complementarity between forms of human capital (interactions) be distinguished from changing “returns to scale”. In Section 2, a simple framework is outlined for guiding the estimation of an extended wage function that includes several, possibly endogenous, heterogenous, and measured with error, human capital stocks. The data are described in Section 3. Empirical specification issues are discussed further in Section 4. 5 and 6 report the estimates for cross-sectional surveys from the Ivory Coast and Ghana. Then in Section 7, for a smaller 2-year panel from adjacent years of the Ivory Coast surveys, measurement error is quantified and alternative estimates of wage functions are compared. Section 8 presents flexible form estimates to assess nonlinearities, and Section 9 reconsiders the gender wage gap in terms of the human capital inputs. Section 10 summarizes the new evidence and suggests how further research might resolve some of the outstanding questions.