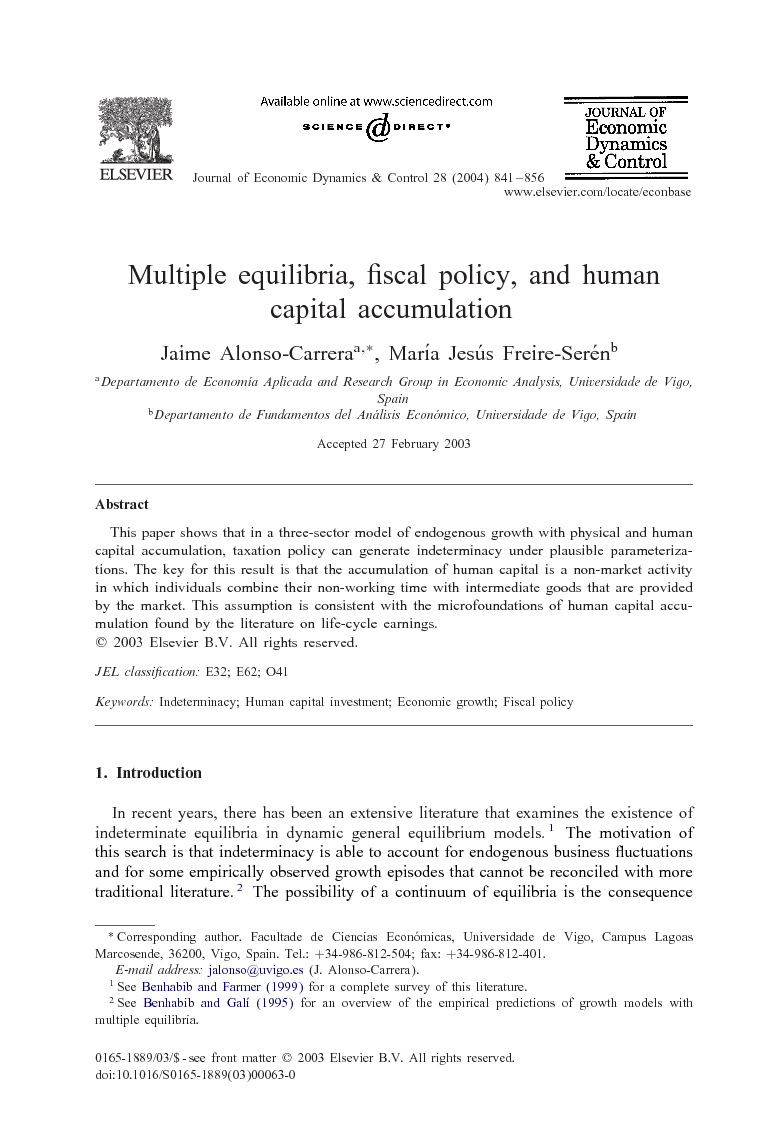 In recent years, there has been an extensive literature that examines the existence of indeterminate equilibria in dynamic general equilibrium models.1 The motivation of this search is that indeterminacy is able to account for endogenous business fluctuations and for some empirically observed growth episodes that cannot be reconciled with more traditional literature.2 The possibility of a continuum of equilibria is the consequence of some market imperfections. Usually, the imperfections are assumed to come from external effects in production or monopolistic competition. Furthermore, it has been showed that indeterminacy appears under empirically realistic assumptions. The intent of this paper is to show that multiple equilibria can also arise straightforwardly without abandoning the hypotheses of perfect competition and absence of externalities. We argue that the market imperfections generated by the taxation policy can generate indeterminacy in a three-sector endogenous growth model with physical and human capital accumulation. As a crucial ingredient for our result, we depart from the traditional endogenous growth model with human capital accumulation by making deeper the microfoundations of the process of human capital accumulation. We specify the accumulation of human capital as a non-market activity that uses effective labor and goods (and services) acquired in the market (intermediate goods, henceforth) as inputs. Therefore, the investment in human capital has a direct component given by the purchases of intermediate goods and an indirect component given by the opportunity cost of the time spent in accumulating human capital. While the former component is perfect substitute of physical capital investment and consumption, the later component is no perfect substitute of those alternative allocations of income. Both components are empirically relevant. For instance, Perli and Sakellaris (1998) estimate the total educational expenditures and the foregone labor income of students in US at 8% and 3.6% of GNP, respectively. Traditionally, the endogenous growth models with human capital accumulation have often alternatively considered only one of these two components of human capital investment. Some models assume that human capital accumulation is a pure non-market activity (see, e.g., Lucas, 1988). Other models instead consider that human capital accumulation is a pure market activity where individuals increase their human capital by directly acquiring the intermediate goods without any other manipulation (see, e.g., Rebelo and Stokey, 1995). By contrast, Jones et al. (1993) also specified a process of human capital accumulation like ours. However, they postulate a two-sector model in which human capital accumulation requires market consumption goods and effective labor. We instead consider a third sector whereby intermediate goods are first produced with a specific technology that uses physical capital and effective labor as inputs. These intermediate goods are then used exclusively, together with effective labor, for the accumulation of human capital. As was pointed out by Schultz (1961), there are a bundle of market goods and services that enhance labor efficiency with cost of time, and however they do not directly satisfy any preferences underlying consumption.3 Since these goods and services are not perfect substitutes of consumable goods, it seems reasonable to assume here different technologies for the production of both types of goods. Hence, we will adopt the two-stage process of human capital accumulation proposed by Ghez and Becker (1975) and Heckman (1976) in their life-cycle models of earnings. We complete the model with the introduction of a tax on physical capital income, a tax on labor income, a subsidy to the purchase of intermediate goods and a subsidy to the opportunity cost of accumulating human capital. We will prove that the fiscal policy mix determines the equilibrium dynamics. Our fiscal policy scheme introduces a gap between the factors intensity ranking across sectors in terms of cost shares and the ranking in terms of factor quantity ratios. When this distortion is sufficiently high, the previous rankings of factor intensities are no consistent. In this case, the standard duality between Rybczynski and Stolper-Samuelson effects, which determines the existence of a unique equilibrium of the usual saddle-path type in multi-sector growth models, is broken. 4 In particular, the equilibrium is locally indeterminate when the entire process of human capital accumulation is relatively more intensive in human capital at the private level (i.e., in terms of the factor quantity ratios), while this process is relatively more intensive in physical capital at the social level (i.e., in terms of the factor cost shares). In a recent paper, Bond et al. (1996) also examine the effects of distortionary factor taxation in a two-sector model where the accumulation of human capital is a pure non-market activity. However, they obtain indeterminacy under an atypical sectoral configuration where the production of new human capital is relatively more intensive in physical capital at the private level, while it is relatively more intensive in human capital at the social level. Benhabib et al. (2000) and Mino (2001) have also obtained this result in two-sector models with social constant returns to scale and sector-specific externalities. In fact, Bond et al. (1996) consider a fiscal policy scheme that is formally equivalent to sector-specific external effects. They consider an asymmetry between capital and labor taxation since labor in human capital sector is untaxed while capital taxation affects the earnings of physical capital in both sectors. The key difference between the contribution of Bond et al. (1996) and the present study is that our three-sector production structure makes compatible a sector-specific fiscal policy with a symmetric fiscal treatment between capital and labor in each sector and with a uniform taxation of each factor across the two market sectors. In this sense, the results of the present paper resemble those obtained by Drugeon et al. (2003). Based on “labor-augmenting” intersectoral external effects stemming from the aggregate capital stock, they obtain indeterminacy when the pure capital good is relatively intensive in itself at the private level. The paper is organized as follows. In Section 2 we present the model. Section 3 characterizes the equilibrium dynamics, analyzing the conditions for the multiplicity of equilibrium paths. Section 4 briefly discusses the economic mechanism underlying the possibility of multiple equilibria. Some lengthy proofs are contained in the appendix.