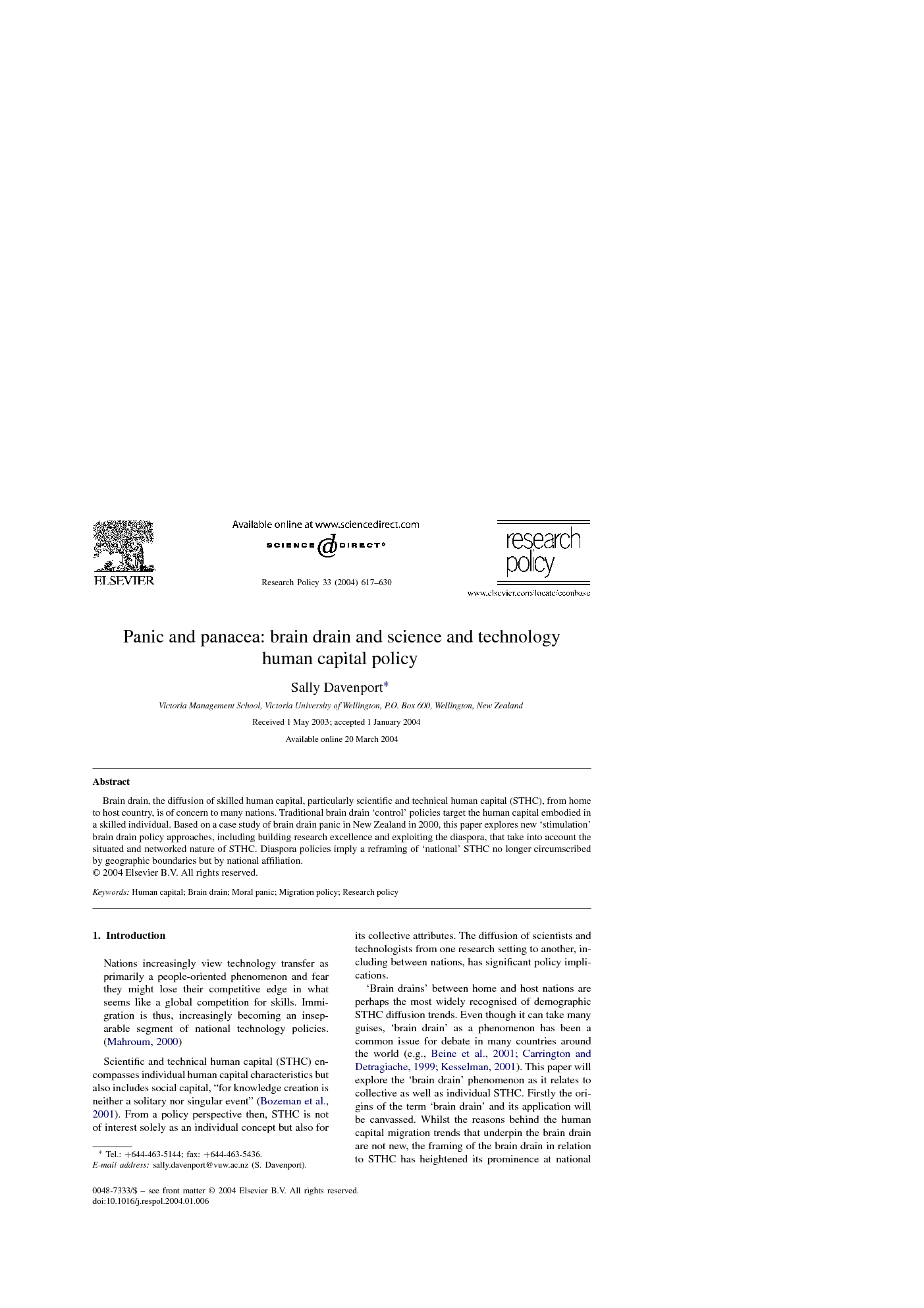 Brain drain, the diffusion of skilled human capital, particularly scientific and technical human capital (STHC), from home to host country, is of concern to many nations. Traditional brain drain ‘control’ policies target the human capital embodied in a skilled individual. Based on a case study of brain drain panic in New Zealand in 2000, this paper explores new ‘stimulation’ brain drain policy approaches, including building research excellence and exploiting the diaspora, that take into account the situated and networked nature of STHC. Diaspora policies imply a reframing of ‘national’ STHC no longer circumscribed by geographic boundaries but by national affiliation.

Nations increasingly view technology transfer as primarily a people-oriented phenomenon and fear they might lose their competitive edge in what seems like a global competition for skills. Immigration is thus, increasingly becoming an inseparable segment of national technology policies. (Mahroum, 2000) Scientific and technical human capital (STHC) encompasses individual human capital characteristics but also includes social capital, “for knowledge creation is neither a solitary nor singular event” (Bozeman et al., 2001). From a policy perspective then, STHC is not of interest solely as an individual concept but also for its collective attributes. The diffusion of scientists and technologists from one research setting to another, including between nations, has significant policy implications. ‘Brain drains’ between home and host nations are perhaps the most widely recognised of demographic STHC diffusion trends. Even though it can take many guises, ‘brain drain’ as a phenomenon has been a common issue for debate in many countries around the world (e.g., Beine et al., 2001, Carrington and Detragiache, 1999 and Kesselman, 2001). This paper will explore the ‘brain drain’ phenomenon as it relates to collective as well as individual STHC. Firstly the origins of the term ‘brain drain’ and its application will be canvassed. Whilst the reasons behind the human capital migration trends that underpin the brain drain are not new, the framing of the brain drain in relation to STHC has heightened its prominence at national levels and resulted in a variety of policy responses. Brain drain crises appear to engender a sense of urgency in political circles and society at large about the need for action to stem the flow of human capital, particularly expensively trained STHC. The paper will then briefly outline a case study of panic around a perceived brain drain in 2000 in New Zealand. Of particular interest to STHC discussion is that the brain drain panic created a public environment ripe for a policy ‘cure-all’, a panacea to what was perceived as partly a STHC issue. The policies that were mooted in response, which were implemented in two distinct phases, a ‘control’ phase and a ‘stimulation’ phase, will have great ramifications for New Zealand’s current and future STHC. In conclusion, the implications of such changes in policy for STHC development will be discussed.

So what might be concluded from this study of brain drain panic and STHC policy panacea? What is very clear from the panic analysis is that brain drain debates, such as that played out in New Zealand in 2000, are very rarely about net migration numbers or skill levels, STHC or otherwise. Brain drain debates appear to reflect a common societal perception that the nation in question is losing to other countries, for good, larger numbers than normal of publicly educated, young and highly skilled nationals. While there is an undercurrent that these emigrants ‘owe’ the taxpayer, in that they have not yet returned the investment in their education and skills, blame is not attributed to these deviants but is directed towards whichever elements of policy or the economy could even be remotely linked to probable reasons for the emigrant’s departure. Panic over the brain drain, however, has major impact as, in the New Zealand case at least, it created a climate of control that was ripe for new policy initiatives, particularly regarding STHC. The first ‘control’ phase of policy responses, particularly that directed at individual scholarship holders, mirrored the sorts of restrictive responses instituted in other countries as counter brain drain measures. This traditional approach to building STHC and research excellence by trying to regulate, tax or restrict individual scientists and technologists often creates negative responses in the very STHC it is aimed at controlling. In contrast the second wave of ‘stimulation’ policy responses appeared to be grounded in an expanded appreciation of the nature of human capital, particularly STHC. While the diaspora and tertiary research funding policies, illustrated in the New Zealand case study, are quite disparate in nature, both are based on a broader conception of STHC than those of the first wave that were focused on individually embodied human capital. STHC is situated and networked. By attempting to address the brain drain issue by targeting these aspects of human capital, the policy responses are more about incentivising and utilising STHC in situ, than about regulation and control of STHC movement. Diaspora policies, by connecting the expatriate researcher into the national STHC infrastructure over a period of time, may also enable traditional counter brain drain policies aimed at repatriation, to be more effective. The broadening of policy responses away from the individual towards the collective nature of human capital, encompassing the development of networks with expatriate STHC, also brings with it a new conception of what constitutes ‘national’ STHC. Policies to activate the diaspora of scientists and technologists, in order to build research capability and excellence, result in a reframing of the national STHC base that is no longer circumscribed by a geographic boundary. That is, a nation’s human capital stocks are perceived as a global network of culturally affiliated skills defined by country of origin rather than country of residence. Coupled with the reframing of immigration policy, from a ‘border control’ mentality into a ‘talent seeking’ service, STHC policies become inherently outward rather than inward looking. As a New Zealand historian phrased it: