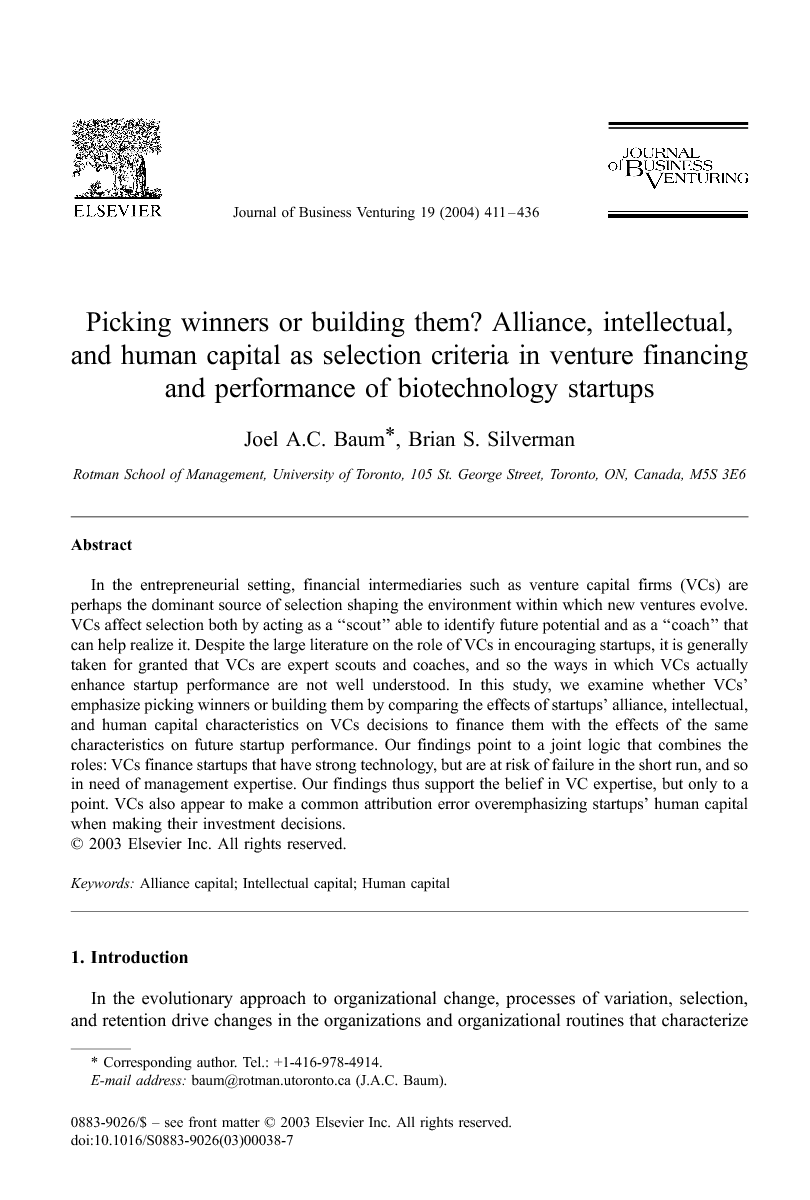 In the entrepreneurial setting, financial intermediaries such as venture capital firms (VCs) are perhaps the dominant source of selection shaping the environment within which new ventures evolve. VCs affect selection both by acting as a “scout” able to identify future potential and as a “coach” that can help realize it. Despite the large literature on the role of VCs in encouraging startups, it is generally taken for granted that VCs are expert scouts and coaches, and so the ways in which VCs actually enhance startup performance are not well understood. In this study, we examine whether VCs' emphasize picking winners or building them by comparing the effects of startups' alliance, intellectual, and human capital characteristics on VCs decisions to finance them with the effects of the same characteristics on future startup performance. Our findings point to a joint logic that combines the roles: VCs finance startups that have strong technology, but are at risk of failure in the short run, and so in need of management expertise. Our findings thus support the belief in VC expertise, but only to a point. VCs also appear to make a common attribution error overemphasizing startups' human capital when making their investment decisions.

In the evolutionary approach to organizational change, processes of variation, selection, and retention drive changes in the organizations and organizational routines that characterize a given organizational population (Aldrich, 1999). As long as variations arise and are subjected to consistent selection criteria, and positively selected variants are preserved and propagated, evolution will occur. These three mechanisms are very general; their operation does not depend on finding a social analog to features of biological evolution (Campbell, 1965). In evolutionary models of entrepreneurship, entrepreneurs generate variation by founding new firms, pursuing different strategies, and attempting to combine different bundles of assets to do so. Selection is then generated by the decisions of external resource holders to allocate their resources among these firms (Aldrich, 1999). In the entrepreneurial setting, financial intermediaries such as venture capital firms (VCs) have been cited as perhaps the dominant source of selection (Anderson, 1999). VCs affect selection by providing financial resources to cash-hungry startups and by favoring new firms with, or requiring them to adopt, particular strategies, practices, or other characteristics. VCs may also provide management expertise or access to other capabilities that bolster the competitive advantage of startups that they fund (Hellmann and Puri, 2002). Further, because they are perceived to be “informed agents” able to identify particularly promising startups, their investment provides a certification benefit that can enable the startup to obtain other resources (Megginson and Weiss, 1991). Thus, VCs can affect selection by acting as what we term a “scout” able to identify potential and as a “coach” (Hellmann, 2000) that can help realize it. In evolutionary terms, the VC industry constitutes an indirect vicarious selective system (Anderson, 1999). Vicarious selectors function to eliminate trials of variations that would be fundamentally detrimental to the fit or survival of a system or even to anticipate certain kinds of variations that might prove beneficial (Campbell, 1965). Through past trial-and-error learning, VCs may evolve vicarious selective systems (e.g., due diligence strategies), which systematically predispose them toward financing startups expressing certain variations and avoidance of others. In turn, in their role as an indirect vicarious selective system, VCs lower investors' costs of search and selection. Rather than waiting for direct selection to determine the success or failure of a startup, investors rely on VCs to identify startups that give off signals predictive of future success and to enhance the performance of startups that they select for funding. VCs that acquire effective vicarious selectors thrive as a result, and successful selectors may subsequently diffuse through the VC industry. VCs thus shape the environment within which new ventures evolve and are themselves subject to selection processes at a higher level. In this paper, we examine whether VCs' vicarious selectors emphasize picking winners or building them. As Shepherd and Zacharakis (2002) note, although researchers have described in detail the criteria VCs use to choose which startups to fund, researchers have typically assumed that VCs are capable of identifying promising startups and consequently have primarily asked VCs to report their own decision criteria without exploring whether these criteria actually influence subsequent startup performance. Yet only a fraction of the firms VCs fund succeed Gifford, 1997 and Gorman and Sahlman, 1989, most achieving an average rate of return on invested capital suggesting that many VCs are unable to discover a “predictive template” (Aldrich and Kenworthy, 1999). Moreover, while research shows VC-backed startups outperform comparable non-VC-backed startups (e.g., Megginson and Weiss, 1991, Sandberg, 1986 and Timmons, 1999), research has rarely sought to identify whether these differences are attributable to inherent differences between VC-backed and non-VC-backed startups or to the postinvestment benefits that accrue to the VC-backed firms. Existing research thus offers little insight into how VCs affect the startup selection process. Given the importance of financial intermediaries to selection within an organizational population, this is an important gap in our knowledge and our research focus. One way to address this gap is to test the effectiveness of VCs predictive templates by comparing the effects of startups' characteristics on VCs decisions to finance them with the effects of the same characteristics on future startup performance. If VCs affect selection primarily by picking winners, then the startup characteristics that attract VC investment should also enhance their future performance. If, instead, VCs affect selection primarily by building winners, then the startup characteristics that attract VC investment need not be associated with future startup performance and may even affect it negatively. Below, we outline in more detail the “scout” and “coach” views of VCs and the empirical implications of each view. We also identify startups' alliances (i.e., social capital), patents (i.e., intellectual capital), and top management (i.e., human capital) as key signals of startup potential. We suggest that, faced with great uncertainty about the quality of startups, VCs will rely heavily on the startups' partners, patents, and top management team characteristics to make judgments about their promise; and that in the race for capital, startups capable of attracting alliance partners, creating intellectual property, and possessing capable management will outperform comparable startups that lack such capabilities. Then, we estimate models of the effects of social, intellectual, and human capital on VC financings and compare these effects with estimates from models of startup performance in the Canadian biotechnology industry from 1991 to 2000. We conclude with a discussion of our findings and proposals for future research.