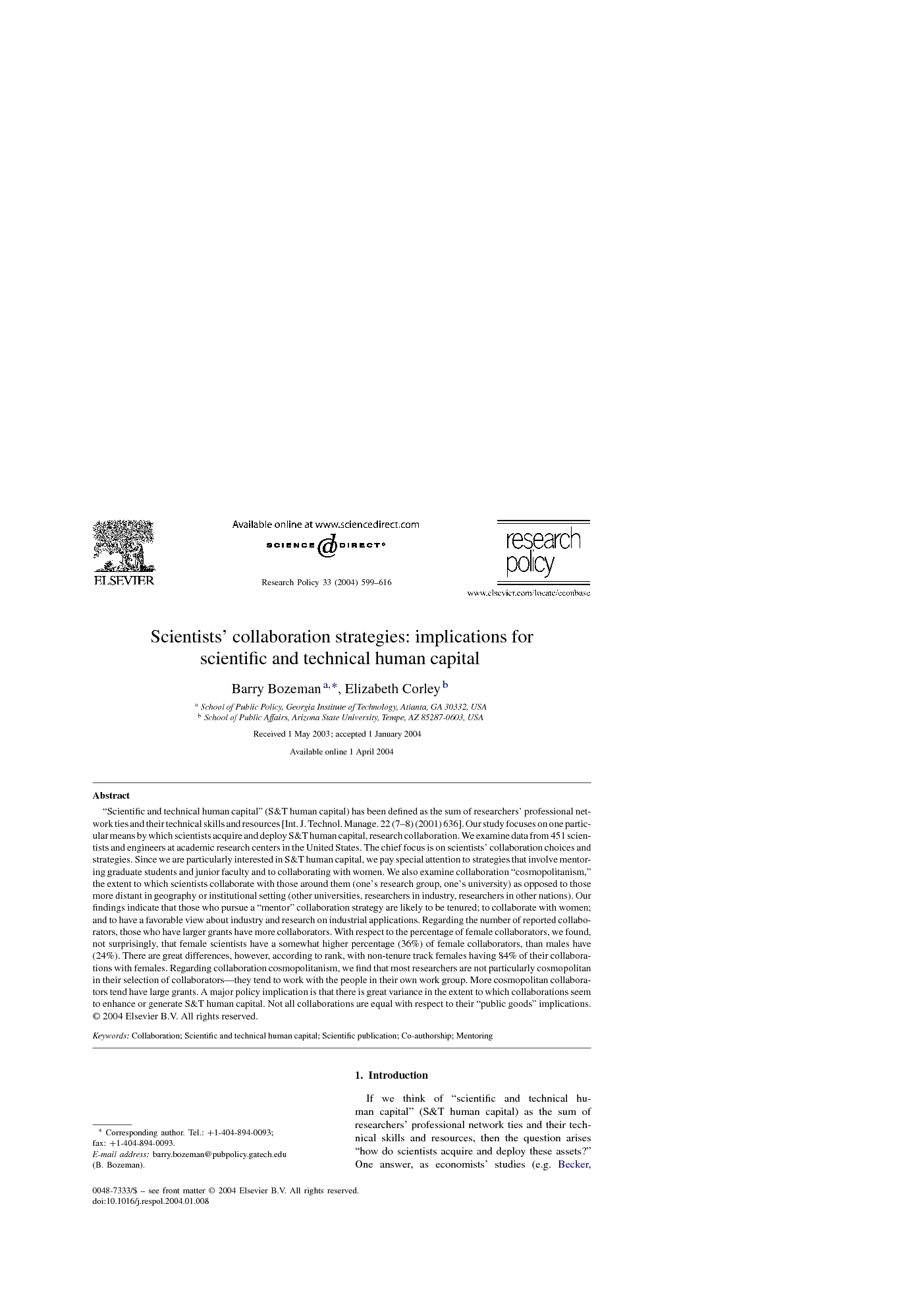 “Scientific and technical human capital” (S&T human capital) has been defined as the sum of researchers’ professional network ties and their technical skills and resources [Int. J. Technol. Manage. 22 (7–8) (2001) 636]. Our study focuses on one particular means by which scientists acquire and deploy S&T human capital, research collaboration. We examine data from 451 scientists and engineers at academic research centers in the United States. The chief focus is on scientists’ collaboration choices and strategies. Since we are particularly interested in S&T human capital, we pay special attention to strategies that involve mentoring graduate students and junior faculty and to collaborating with women. We also examine collaboration “cosmopolitanism,” the extent to which scientists collaborate with those around them (one’s research group, one’s university) as opposed to those more distant in geography or institutional setting (other universities, researchers in industry, researchers in other nations). Our findings indicate that those who pursue a “mentor” collaboration strategy are likely to be tenured; to collaborate with women; and to have a favorable view about industry and research on industrial applications. Regarding the number of reported collaborators, those who have larger grants have more collaborators. With respect to the percentage of female collaborators, we found, not surprisingly, that female scientists have a somewhat higher percentage (36%) of female collaborators, than males have (24%). There are great differences, however, according to rank, with non-tenure track females having 84% of their collaborations with females. Regarding collaboration cosmopolitanism, we find that most researchers are not particularly cosmopolitan in their selection of collaborators—they tend to work with the people in their own work group. More cosmopolitan collaborators tend have large grants. A major policy implication is that there is great variance in the extent to which collaborations seem to enhance or generate S&T human capital. Not all collaborations are equal with respect to their “public goods” implications.

If we think of “scientific and technical human capital” (S&T human capital) as the sum of researchers’ professional network ties and their technical skills and resources, then the question arises “how do scientists acquire and deploy these assets?” One answer, as economists’ studies (e.g. Becker, 1962) of human capital have shown, is formal education. Researchers acquire and impart knowledge through formal education processes, often resulting in credentials that signify scientific assets. Sociologists have shown that informal network ties, such as invisible colleges, can be just as important to the acquisition and transmission of scientific knowledge. Tacit knowledge often plays an important role in S&T human capital, as demonstrated by recent studies (Nelson and Nelson, 2002 and Balconi, 2002). Our study focuses on one particular means by which scientists acquire and deploy S&T human capital, research collaboration. The relation of research collaboration to S&T human capital is a topic considered by at least a few other researchers (e.g. Laudel, 2001 and Glaser, 2001), but it is not a common theme. The literature on scientists’ research collaboration shows us that collaboration choices are governed by a wide variety of factors including inter-institutional structures (Landry and Amara, 1998), formal (Wen and Kobayashi, 2001) and informal research networks, research alliances and covenants (Pisano, 1991), and arrangements for sharing expensive or scarce scientific resources and equipment (Kelves, 1995). Melin (2000, p. 32) notes, “if we move from macro to micro, we see that intertwined with these structural circumstances there are other, more individual reasons for collaboration.” Our study focuses on the “individual reasons,” particularly strategies researchers pursue in their collaboration choices. We certainly do not discount the significance of external environmental constraints and institutions, but we maintain that many of the factors governing individual scientists’ collaboration choices remain very much within the control of the individual, especially when the researcher works in an academic institution. Much previous research on collaboration focuses on co-authorship. A co-author concept of collaboration has many advantages. Katz and Martin (1997) point out four key advantages of using co-authorship as a measure of collaboration including its verifiability, stability over time, data availability and ease of measurement. But they also note that co-authorship is no more than a partial indicator of collaboration. Our study foregoes the advantages of co-author approaches in favor of a broader conception of collaboration, one that seems to us more appropriate to the study of motives and strategy. Using questionnaire data, we employ a self-reported concept of collaboration, permitting the respondent to determine what is and is not “collaboration.” While a focus on a strategy-based, self-reported concept of collaboration presents its own problems, chiefly a lack of operational precision, it avoids some of the problems of a publication-based measure of collaboration. For instance, in an early case study to investigate collaboration, Hagstrom (1965) found evidence that some publications listed authors for purely social reasons. Stokes and Hartley (1989) showed that sometimes a researcher may be listed as a co-author, simply by virtue of providing material or performing a routine assay. At the other extreme, an individual may provide a key idea for research but, for any of a variety of reasons, not be included as a co-author. La Follette (1992) showed that the practice of making colleagues “honorary co-authors” has become quite common. Our study examines data from 451 scientists and engineers1 at academic research centers in the United States, data from the spectrum of collaborators, ranging from post-doctoral researchers to full professors and research directors. While the respondents to our mailed questionnaire are from a wide variety of universities and from different research fields, all of them work in multidisciplinary settings with a strong propensity toward collaboration. In many of these centers, an avowed objective is to provide quality training and to enhance the research capacities of the persons affiliated with the centers. In the next section of this paper (Section 2), we define the concept of scientific and technical human capital and discuss how this definition is different from past research on human capital and social capital models. We also discuss in Section 2 the concept of research collaboration and how scientific collaboration can play a critical role in developing scientific and technical human capital. In Section 3 of the paper, we describe the data collection methods that were used to complete the analyses that are presented in the paper. The next section of the paper introduces a conceptual model of how research collaboration is related to the development of scientific and technical human capital. In addition, we present and discuss four research hypotheses that operationalize (in an empirical way that can be tested with the data available) the relationship between scientific and technical human capital and research collaboration patterns. In 5 and 6 of the paper, we present the results of our statistical analyses and discuss how the findings relate to the four, previously discussed, research hypotheses. In the last section of the paper (Section 6), we draw some general conclusions for the research project and present several implications for science and technology policy.