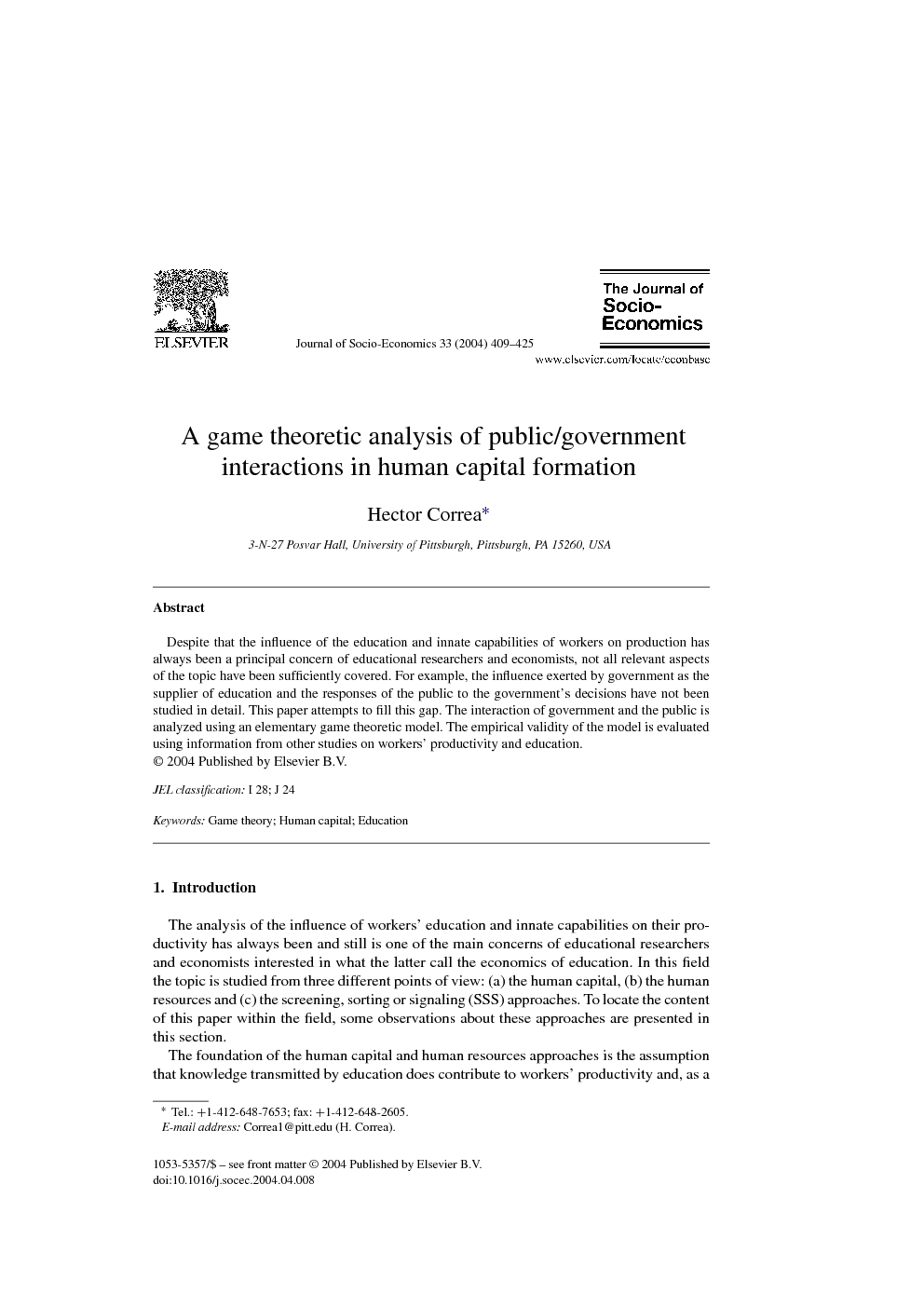 Despite that the influence of the education and innate capabilities of workers on production has always been a principal concern of educational researchers and economists, not all relevant aspects of the topic have been sufficiently covered. For example, the influence exerted by government as the supplier of education and the responses of the public to the government’s decisions have not been studied in detail. This paper attempts to fill this gap. The interaction of government and the public is analyzed using an elementary game theoretic model. The empirical validity of the model is evaluated using information from other studies on workers’ productivity and education.

The model and analyses presented in this paper are based on a systematic view of the interest and motivations of the government and the public. This basis is implicit in all applications of the human capital, human resources and SSS concepts of educational policy-making, but does not seem to have been properly operationalized, as is done here. The results obtained show an overall consistency between the model in 2 and 3 and the empirical information presented in Section 4 and used in Section 5. This indicates that the game theoretic model introduced here is a more useful instrument for a systematic study of the interactions between education and other socio-economic processes than the approaches that have been used previously. Despite the rather intensive efforts made in the last 4–5 decades, a clear, comprehensive and systematic view of the supply and demand of education and of their equilibrium does not seem to have been developed. It would be pretentious to say that this paper fills this vacuum; however, it does contribute by calling attention to the existence of the gap, and presents a possible way to deal with it. Nonetheless, the model and the analyses presented have several important limitations whose removal are worthwhile topics for future research. Some of these are mentioned below, proceeding from improvements that can be introduced in the model as it currently stands or with only minor modifications, to those that require more significant alterations. One obvious limitation of the quantitative analysis of the model is that it does not have an appropriate empirical basis. A first, but minor, problem is that the equilibrium functions in Table 1 do not satisfy the identifiability conditions needed for the estimation of their parameters. This problem can easily be solved by introducing into these functions exogenous determinants of the public’s and government’s behavior. However, even if this is done, the experience of the numerous statistical studies of human capital formation and related topics previously mentioned indicates that at least some of the data needed are not likely to be available, and even if they were, the actual statistical analysis is full of sand traps that are not likely to be avoided until several attempts have been made. Supporting evidence for this observation is presented by Harmon et al. (2001, pp. 1–37). It should also be observed that only two types of one isolated public/government interaction are analyzed here. This limitation can and should be removed. This can easily done easily by assuming that the public and the government in each current period respond to the behavior of their counterparts in the previous period. With this, the conditions for the Cournot and Stackelberg equilibriums become a system of difference equations that can probably be solved with well-known methods. It is also possible to use the methods of dynamic optimization applied by Ben-Porah (1967) and others for investigations based on the human capital approach to the analysis of the model presented here. The simplicity of the model in Section 2 is simultaneously one of its virtues and one of its most important defects. The former point will not be argued, since this would be outside the main purpose of this paper. On the other hand, the model has the serious defect that the two payoff functions used consider only the financial benefits of education for the persons that receive it, and through them, the society to which they belong. The payoff function for the public could be extended by considering other determinants of the well-being of individuals and that for the government could be modified to consider explicitly a production function of education, instead of the more easily quantified output of the educational process, i.e., the number of students with different educational levels. This could be attempted first by expanding the static model analyzed in this paper, and then, proceeding to dynamic analyses along the lines suggested above. In view of the mathematical complexity of these studies, it would more appropriate to do so in numerical studies based on the conceptual framework used here or on some of its possible extensions. Finally, reference will be made to the possibility of important extensions of the basic structure of the model in 2 and 3. First, it should be observed that this model does not consider the demand in the economic system for workers with different levels of education. This means that it leaves out a particularly important determinant of the demand for education and that, as a consequence, it does not completely integrate the human capital, human resources and SSS approaches to the interaction between education and the economy. In principle this can be done by adapting the methods used in the SSS approach to the analysis here. Second, it should be clear that, with few if any exceptions, the supply of education, and as a consequence of educated people, is controlled by the government. In most cases, the government and the private sector fulfill this function. This means that the realism of the model would be substantially increased by taking into consideration the existence of parallel public and private education systems. These two topics clearly constitute important areas for future research. In conclusion, this paper takes a large step in the right direction in the study of areas in which economic and educational concerns overlap. However, as shown by the suggestions for improvement of the model and its analysis, a substantial amount of work remains to be done. This is left as a challenge for future research.