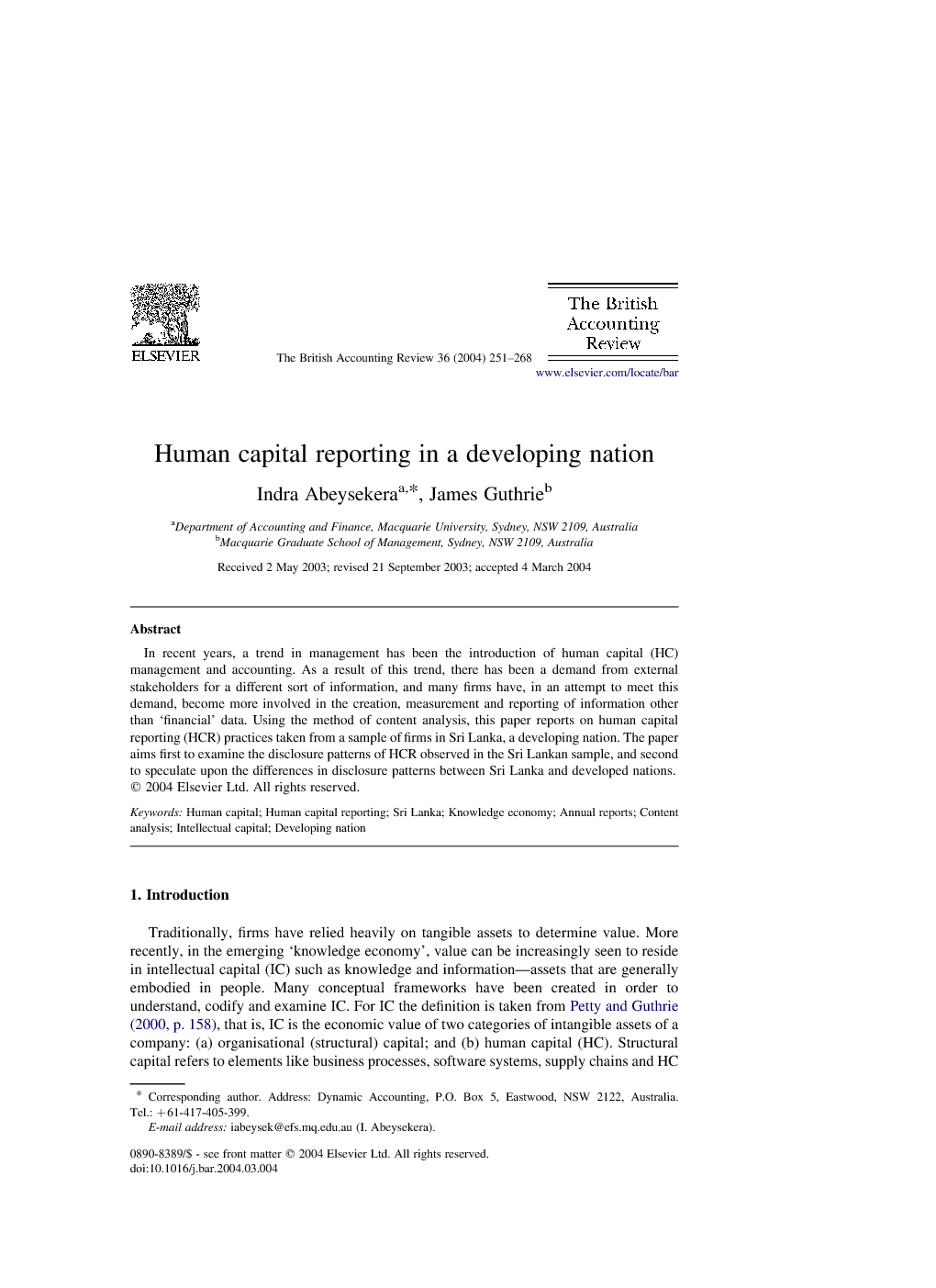 In recent years, a trend in management has been the introduction of human capital (HC) management and accounting. As a result of this trend, there has been a demand from external stakeholders for a different sort of information, and many firms have, in an attempt to meet this demand, become more involved in the creation, measurement and reporting of information other than ‘financial’ data. Using the method of content analysis, this paper reports on human capital reporting (HCR) practices taken from a sample of firms in Sri Lanka, a developing nation. The paper aims first to examine the disclosure patterns of HCR observed in the Sri Lankan sample, and second to speculate upon the differences in disclosure patterns between Sri Lanka and developed nations.

Traditionally, firms have relied heavily on tangible assets to determine value. More recently, in the emerging ‘knowledge economy’, value can be increasingly seen to reside in intellectual capital (IC) such as knowledge and information—assets that are generally embodied in people. Many conceptual frameworks have been created in order to understand, codify and examine IC. For IC the definition is taken from Petty and Guthrie (2000, p. 158), that is, IC is the economic value of two categories of intangible assets of a company: (a) organisational (structural) capital; and (b) human capital (HC). Structural capital refers to elements like business processes, software systems, supply chains and HC refers to staff competencies and the competencies of external stakeholder human resources available to the firm. An early attempt at creating a model to measure and report on IC was developed by Brooking (1996). Subsequent authors have modified and expanded upon Brooking's original framework. One such recent framework (Guthrie et al., 2004) describes IC as being made up of the following three components: internal (structural/organisational) capital; external (relational/customer) capital; and HC. It is increasingly being understood that HC and IC are, in general, invaluable assets in contemporary knowledge-driven economies (Edvinsson and Sullivan, 1996, Graham and Pizzo, 1998, Backhuijs et al., 1999 and Bontis, 2003). For instance, Edvinsson and Sullivan (1996) argue that managing IC is about managing knowledge and leveraging HC. HC is a component of IC, for a firm's knowledge is stored within its employees, and organisational assets flow-on from the firm's ability to utilise its employees. HC is vital as it is the component of IC that gets transformed into value through the medium of structural capital (Backhuijs et al., 1999 and Edvinsson and Sullivan, 1996). This development has important implications for the workforce, indicating that the management of HC will continue to grow in importance. The recognition that employees are valuable assets will mean that different assumptions will have to be made regarding the methods of managing people. A necessary foundation for this change will be the ability of a firm to identify and codify the contribution of HC. The need for firms to be able to effectively manage, measure and report on intangible assets has led to the development of a number of measurement tools such as content analysis. In the past decade, firms such as the Skandia Group, the Canadian Imperial Bank of Commerce, Hughes Space and Communications, Dow Chemicals Firm, Buckman Laboratories International, and Telia have incorporated the measurement of HC (among other IC measurements) into their strategic management and internal and external reports (Buckowitz and Petrash, 1997, Flamholtz and Main, 1999, Petrash, 1996 and Stewart, 1994). There has also been a noticeable shift, at least in theory, in the attitude of management towards their employees and in the way employee contribution to the firm is understood. Bassi et al. (2000, pp. 334–354) revealed that the senior management of many of the top companies in the US and Europe believed their employees to be a key asset because they are the repositories containing the knowledge needed to achieve the mission of the firm. The senior management believed that HC led to increased revenue. Also, Bassi et al. (2000, pp. 353–354) found that market analysts recognise the value of HC by placing a higher value on the stock of firms that can be seen to possess talented employees. However, many managers have faced difficulty in retaining employees (The Economist Intelligence Unit, 1998, p. 3). Part of the problem is an erosion of loyalty occasioned by re-structuring undertaken by many firms (Cascio, 1998). Another part of the problem resides in the fact that knowledge workers are a scarcer resource than workers who often have opportunities to easily leave one firm to go to another (Quinn et al., 1996). While most firms assert that people are their chief asset, making it reasonable to expect that companies would do all in their power to retain that asset, however, the converse has been found to be true (Olsson, 2001 and The Economist Intelligence Unit, 1998, p. 3). To adequately address the issue of employee (HC) retention, companies should reform their labour practices and begin treating employees in a manner reflective of their value to the firm. As noted by Stewart (1997, p. 104), it is imperative that companies treat employees as assets, providing them with appropriate pay, prospects for promotion, skill development opportunities and a work environment that allows autonomy and creativity. Furthermore, employee motivation must be kept high, because HC is reliant upon the willingness of people to voluntarily share and apply knowledge and thereby transform it into IC. The purpose of this research is to examine the state of Human Capital Reporting (HCR), as demonstrated in the annual reports of the largest listed Sri Lankan firms. This will allow some comparison between Sri Lanka and a developed nation, Australia; thus providing the basis for a speculative commentary on the difference between the two situations. The paper is organised as follows. Section 2 outlines a brief review of the HCR literature, focusing on the importance of HC to the reporting practices of a firm. Section 3 describes the research method employed to collect and analyse disclosures in the sample of annual reports (namely, content analysis and coded results, using frequency and line count), and outlines details about Sri Lanka relevant to the present study. The empirical evidence from the content analysis is presented in Section 4, while Section 5 provides the summary and conclusion.