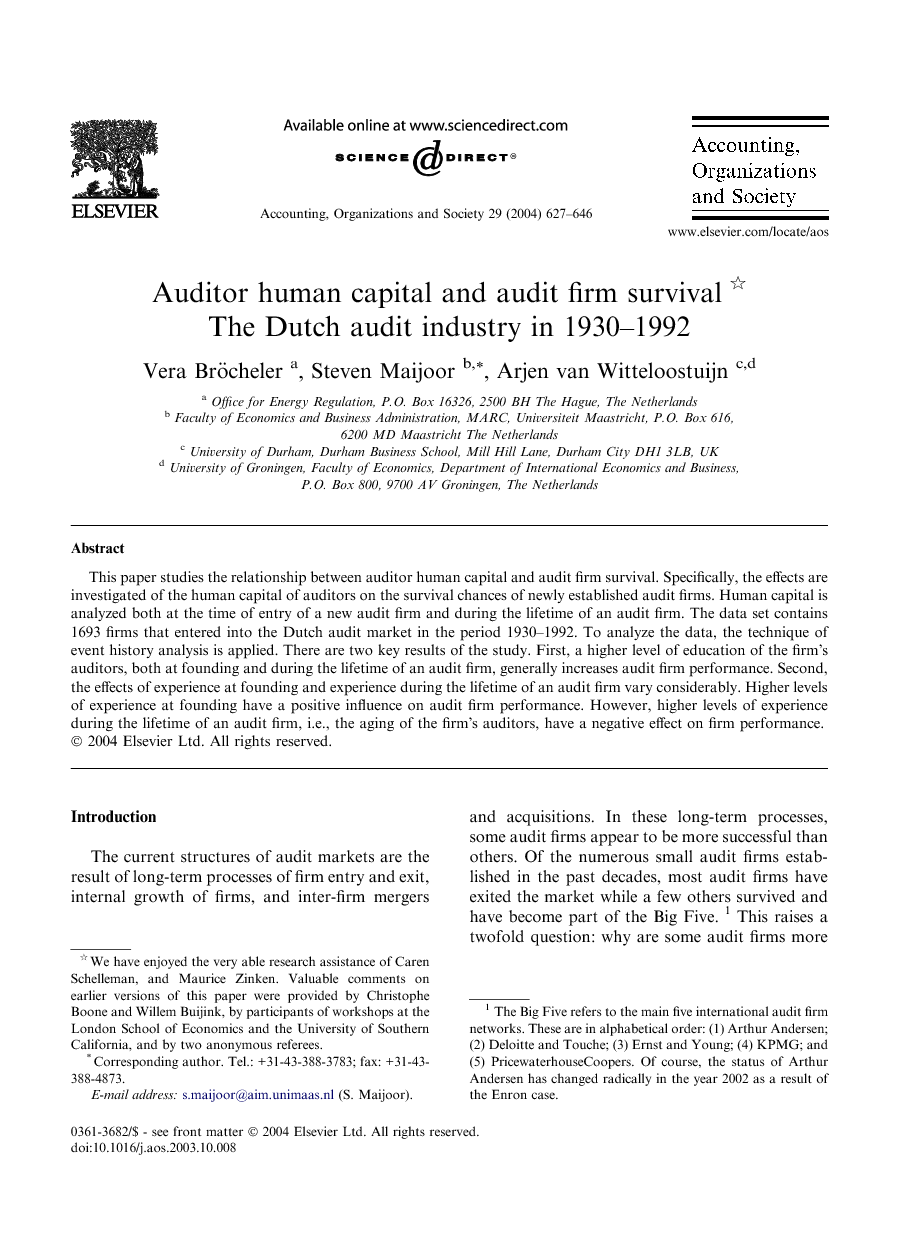 The current structures of audit markets are the result of long-term processes of firm entry and exit, internal growth of firms, and inter-firm mergers and acquisitions. In these long-term processes, some audit firms appear to be more successful than others. Of the numerous small audit firms established in the past decades, most audit firms have exited the market while a few others survived and have become part of the Big Five.1 This raises a twofold question: why are some audit firms more successful than other audit firms, and what makes a new audit firm a likely candidate for survival? As an audit firm provides a professional service, human capital can be expected to play a key role in the explanation of audit firm success and failure (Morris & Empson, 1998). In fact, many changes in the structure of the audit market as a result of entry, exit, internal growth, and merger and acquisition imply the regrouping of individual auditors without any substantial change in tangible assets. Therefore, this paper will analyze the effects of two important components of human capital on audit firm performance. These two components are education (general human capital) and experience (specific human capital). More specifically, this paper attempts to assess whether audit firms with founders with high levels of education and experience have different survival and exit rates compared to their less educated and experienced counterparts. In addition, the paper attempts to assess whether hiring more highly educated and more experienced auditors over time affects the survival and exit rates of audit firms. The motivation for this paper is fourfold. First, this paper extends existing audit market research by investigating the effects of audit firm characteristics on audit firm survival. Determinants of audit firm survival, which can be considered to be an important measure of audit firm performance, have seldom been analyzed explicitly in previous audit market research. Second, the paper uses an alternative measure of the effects of auditor education and auditor experience. While there is a vast body of research on auditor education and auditor experience, most studies pertain to the consequences for decision making in specific auditing tasks. This paper analyzes the effects of education and experience for a wider group of decisions, i.e., decisions about building up and managing an audit firm. Third, the paper analyzes a part of the audit market neglected in previous audit market research, i.e., the small firm segment. Studying the process of entry, survival and exit of small firms adds to the understanding of the structures and dynamics of audit markets as a whole. Finally, from an organization sciences perspective, this paper integrates organizational ecology and industrial organization by including variables that are used in both streams of research. For the empirical analyses the Dutch audit market was selected. Many characteristics of the Dutch market are similar to those of the Anglo-Saxon audit markets covered in previous research (Buijink, Maijoor, & Meuwissen, 1998). For example, the international audit firm networks are all represented, dominating the Dutch market, and Dutch auditing and financial accounting regulations mirror international standards. The sample of the study consists of 1693 firms that entered the Dutch audit market in the period 1930–1992. This paper is organized as follows. In the following section relevant previous research is discussed covering both audit market studies and organizational survival studies. In the second section the hypotheses of this study are formulated using human capital theory. The third section describes the characteristics of the data set and the variables used in the empirical tests. The fourth section discusses the specific characteristics of the event history model at hand. The fifth section reports the results of the study. Finally, the sixth section provides a discussion and appraisal of the study.