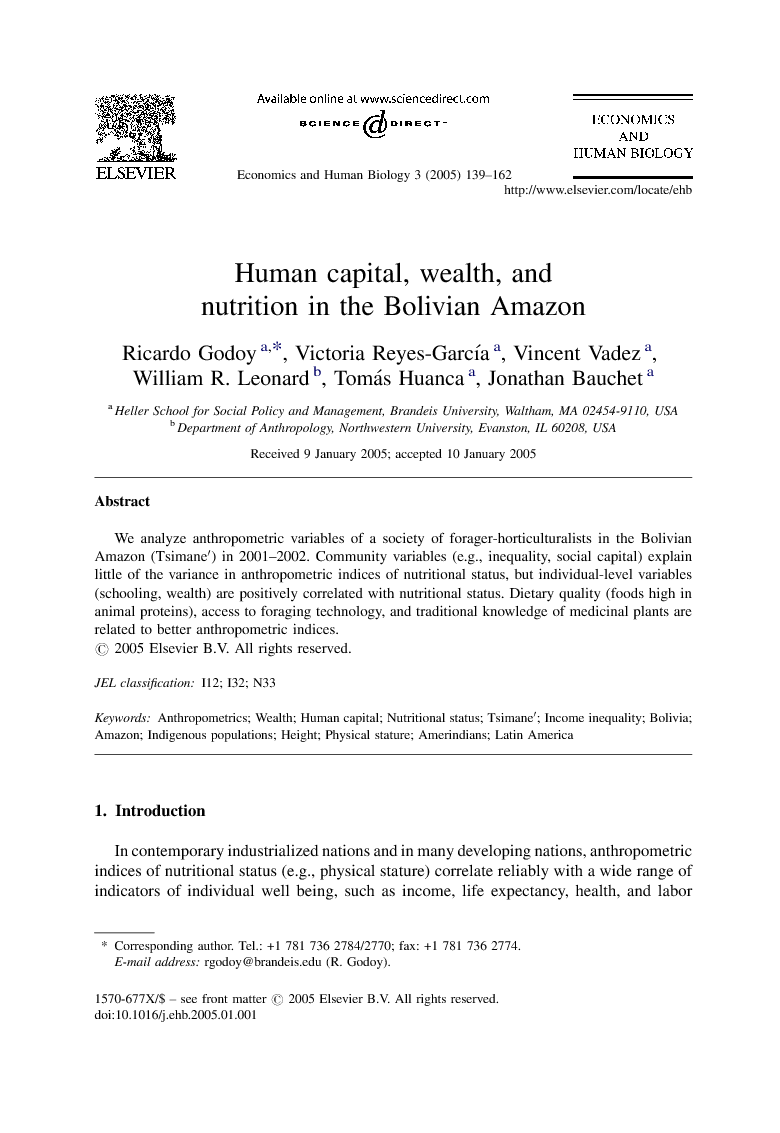 In contemporary industrialized nations and in many developing nations, anthropometric indices of nutritional status (e.g., physical stature) correlate reliably with a wide range of indicators of individual well being, such as income, life expectancy, health, and labor productivity (Steckel and Rose, 2002, Fogel, 1994, Komlos, 1989, Steckel, 1995, Steckel, 2003 and Strauss and Thomas, 1998). Historical evidence suggests that during the early stages of industrialization, anthropometric indices deteriorated despite income growth. Historical case studies from Japan, Britain, Austria, Hungary, Ireland, and the United States suggest that during the early stages of industrialization adults from rural areas had higher physical stature than their urban counterparts (Baten, 2000, Komlos, 1987, Komlos, 1989, Komlos, 2003, Mokyr and Grada, 1994 and Shay, 1994). Komlos calls the downswings in physical stature during the early stages of industrialization “one of the most amazing findings” of historical anthropometric studies, and attributes it to growing income inequality, increase in the relative price of food and animal proteins, losses of food during farm-to-city transport, population growth, to unsanitary conditions in cities, as well as to commercialization that brought about a substantial changes in relative prices (Komlos, 1994). We study a contemporary small-scale, pre-industrial society of foragers and horticulturalists in the Bolivian Amazon, the Tsimane′, to identify the covariates of nutritional status among adults (18 years of age and older) during the early stages of sustained participation in a market economy. The results can complement earlier findings obtained on rural self-sufficient populations in a historical setting. Why did self-sufficient peasants and farmers during the initial stages of industrialization in the 18th and 19th centuries enjoyed better nutritional status than their urban counterparts despite having lower income as first suggested in Komlos (1985)? Studies in early-industrial societies suggest that nutritional status improved as the distance from the village to the city increased, presumably because distance shielded people from the unsanitary conditions of cities and because the countryside had greater availability of food and lower prices for staples (Komlos, 1995; Shay, 1994). Studies in economic history as well as in social epidemiology from industrialized nations suggest that income inequality harms health (Kawachi, 2000, Komlos, 1994 and Wilkinson, 1996) partly because it creates psychosocial stress (Wilkinson, 1997), erodes social capital (Kawachi and Kennedy, 2002), and makes it harder to agree on the provision of public goods (Deaton, 2003 and Putnam et al., 1993). Estimating the effect of income inequality and social capital on health in contemporary industrial societies is hard because confounding variables such as government transfers, immigration, and racial and ethnic heterogeneity come into play. Estimating the effects of income inequality and social capital in 18th and 19th-century industrial societies is even harder owing to the shortage of information, particularly information related to social capital. Contemporary pre-industrial, small-scale societies provide an alternative setting to explore the relations of interest since they lack most of these confounding variables. Yet, unlike in industrialized nations, in small-scale, contemporary pre-industrial societies income inequality might have a modest effect on health because there is likely to be little income inequality owing to social norms of sharing and redistribution (Godoy, 2001, Gurven et al., 2000 and Kaplan and Hill, 1985), and because the same social norms should protect individual health from the presumably harmful effects of income inequality. More importantly, the Tsimane′ allow one to test whether standard determinants of nutritional status in industrialized nations, such as income, wealth, and human capital hold in societies with different institutional arrangements. To illustrate: if the relation between nutritional status and income, wealth, or human capital displays standard diminishing marginal utility, then one should expect individual resources to have strong protective effects on own nutritional status among poor people such as one finds in contemporary pre-industrial, small-scale societies. Yet, when social norms of sharing, gift giving, and reciprocity cause individual resources to leak to the rest of the community, then social norms will attenuate the protective effect of individual resources on own health. Our goal is to estimate the correlation between anthropometric indicators of adult nutritional status and village variables, such as income inequality, social capital, and village-to-town distance. We expect social capital to protect the nutritional status of individual adults, and we expect income inequality to have a negligible effect on own nutritional status. Moreover, we want to estimate the effect of income on adult nutritional status and, in so doing, assess whether pervasive norms of reciprocity and gift giving dilute the protective effects of household resources on own nutritional status.

We draw two tentative conclusions from the analysis. First, measured village variables (nurses, traditional healers, population size, social capital, travel time to the nearest village) explain a low share of the variance in anthropometric measures of adult nutritional status. Second, individual variables play a more prominent role, particularly variables associated with modern human capital and wealth. Thus, contrary to our expectations, individual resources did not get diluted in the village as a consequence of social norms of reciprocity. In other words, even in highly autarkic societies; such as the Tsimane′ of Bolivia, with strong social norms of reciprocity, individual resources embedded in modern forms of human capital and household wealth protect one's own short-run nutritional status. Except for age, we did not find individual variables that explained variation in adult physical stature. The analysis of within-population variance sheds some light on why rural peoples in the early stages of industrialization in Europe and North America might have had better health than their urban counterparts and poses questions for future research. The information presented does not bear out some hypotheses from the historical record of industrial nations. For example, we find no evidence that the availability of farmland matters among the Tsimane′ because the Tsimane, like most native Amazonian societies, have large amounts of land available relative to people, i.e., enjoy a low population density (Davis and Wali, 1993). We find no evidence that income inequality or village population size matters in shaping adult nutritional status, though the conclusion could change if one examined the role of income inequality over a larger geographical unit than the village. Our results resemble those of Malina et al. among smallholders in Oaxaca, Mexico (Little et al., 1988 and Malina et al., 1985). They found that growth rates of anthropometric indices often did not differ across children of different socioeconomic status. Nor do we find evidence that hygiene matters a lot in this setting. In contrast, Europe, pre-Hispanic Mexico, 19th-century North America, and in many cities of the developing world, infectious diseases from population growth, poor nutrition, and unhygienic conditions scourged urban dwellers (Bogin, 1988 and McNeill, 1976). Unsanitary conditions in cities caused poor nutritional status among the population. Instead, we find some indirect evidence to suggest that it was probably the quality of the diet that mattered, particularly access to animal protein, fish, game, or meat (or meat products) from domesticated animals. We did not measure the consumption of animal protein that individuals consumed, so we cannot test the hypothesis in a direct way, but animal protein emerges as a likely candidate since households with greater wealth in domesticated animals had better adult measures of short-run nutritional status, though the magnitude of the effect was small and results were marginally significant in some cases. Future studies in anthropometrics should probably focus on dietary quality, particularly the consumption of animal proteins between rural and urban populations. Articles by Brinkman, Drukker, Haines, Craig, Weiss, and Cuff in the book by Komlos and Baten, The Biological Standard of Living in Comparative Perspective, already provide empirical evidence for the role of protein consumption in shaping anthropometric indicators in contemporary developing nations and in 19th-century North America. 5 A more complete understanding of urban-rural differences in nutritional status during the early stages of industrialization will probably begin to emerge when we combine anthropometric history with the historical study of ethnobiology, ethnozoology, and ethnomedicine. Recent years have seen an upsurge of interest in industrial nations in the role of community variables, such as income inequality and social capital, in shaping individual health. The interest has done much to shift attention away from canonical determinants of health, such as income and human capital, which have served well until now. Growing evidence from industrial nations has started to accumulate suggesting that the effect of income inequality and social capital on health is often ambiguous or weak (Lynch et al., 2004a and Lynch et al., 2004b). The case study of the Tsimane′ suggests that, at least for populations in developing nations, a reappraisal of the emerging orthodoxy is warranted before dropping more conventional explanations.