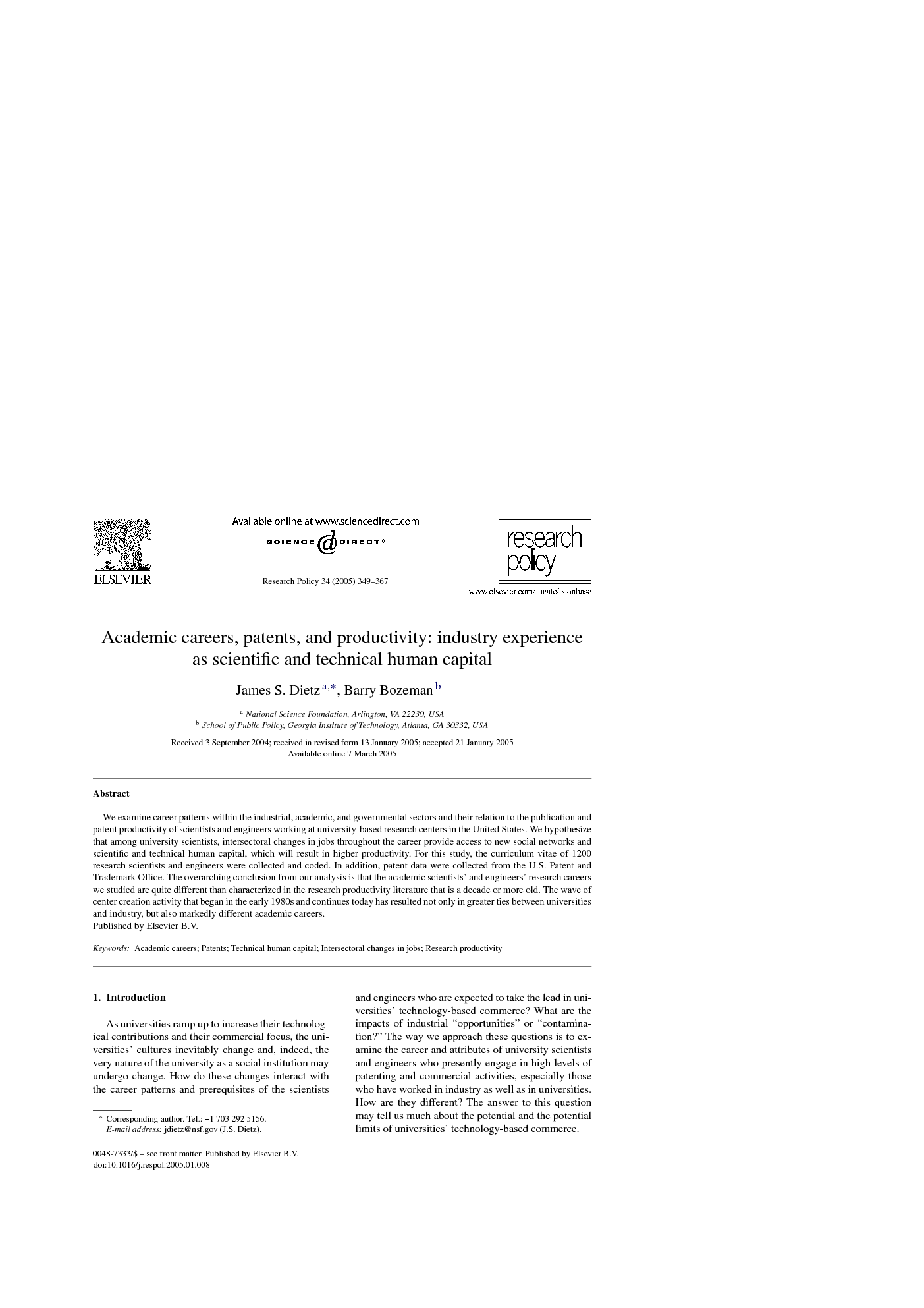 We examine career patterns within the industrial, academic, and governmental sectors and their relation to the publication and patent productivity of scientists and engineers working at university-based research centers in the United States. We hypothesize that among university scientists, intersectoral changes in jobs throughout the career provide access to new social networks and scientific and technical human capital, which will result in higher productivity. For this study, the curriculum vitae of 1200 research scientists and engineers were collected and coded. In addition, patent data were collected from the U.S. Patent and Trademark Office. The overarching conclusion from our analysis is that the academic scientists’ and engineers’ research careers we studied are quite different than characterized in the research productivity literature that is a decade or more old. The wave of center creation activity that began in the early 1980s and continues today has resulted not only in greater ties between universities and industry, but also markedly different academic careers.

As universities ramp up to increase their technological contributions and their commercial focus, the universities’ cultures inevitably change and, indeed, the very nature of the university as a social institution may undergo change. How do these changes interact with the career patterns and prerequisites of the scientists and engineers who are expected to take the lead in universities’ technology-based commerce? What are the impacts of industrial “opportunities” or “contamination?” The way we approach these questions is to examine the career and attributes of university scientists and engineers who presently engage in high levels of patenting and commercial activities, especially those who have worked in industry as well as in universities. How are they different? The answer to this question may tell us much about the potential and the potential limits of universities’ technology-based commerce. Thus, a central question of our paper is “during the course of scientists’ or engineers’ careers, what are the effects of changes in jobs, especially movement between universities and industry, on productivity, especially patenting?” Specifically, we not only test a model of research productivity, specifically publications and patent counts, considering the effects of diversity of job experiences, but also the interactive impacts of grant awards, early publication, and mentoring opportunities. In contrast to the existing body of literature, many of these variables can be affected by the policies of funding agencies. Our research uses data from a U.S. Department of Energy (DOE) and National Science Foundation (NSF) funded project called the Research Value Mapping Program, which is headquartered at the Georgia Institute of Technology School of Public Policy. The program is studying new social and economic approaches to the valuing of publicly funded research—specifically as it is carried out in research centers. The data for our study include the curriculum vitae (CVs) of 1200 research scientists and engineers supported by DOE, the Department of Defense, and NSF research centers have been collected and coded. In addition to the CV data, patent data were collected from the U.S. Patent and Trademark Office (USPTO) database. Our approach differs from previous approaches in that it examines the pattern of researchers’ careers over time and the effect of job changes and other critical events to the rate of productivity over time. It has its intellectual roots in a scientific and technical human capital (S&T human capital) theory (Bozeman and Corley, 2004 and Bozeman et al., 2001) of knowledge generation that suggests that human and social capital building experiences over time affect the formation and pattern of scientific careers, and these opportunities intersect and act in synergistic ways to affect long-term productivity. In brief, we find considerable intersectoral diversity within the careers scientists and engineers working in science and engineering research centers. And, while higher publication productivity seems to be associated with more “traditional” academic careers, patent productivity seems to be associated with less traditional, more industry oriented careers even though a substantial fraction of those who have worked in industry continue to patent in while in academia. In addition, we argue that there is potential policy benefit in removing artificial boundaries set up in the extant literature on academic and industry careers where careers are treated as if they were consistently academic or industrial in nature. The theory implies that a diversity of job experiences will affect collaborative patterns and the exchange of human capital through the building of a wider variety of network ties and social capital. This assertion is related to Granovetter's (1973) notion that greater benefits accrue to those who are able to tap “weak ties” (e.g., a friend of friend) due to exploitation of human and social capital that is non-redundant with one's one web of human and social capital endowments1.